But It's For Little Girls

Think about the male stereotypes that you observe every day in the various media you consume or are exposed to.

Interesting, aren't they? The way they are put forward. The way that, while the media is slowly moving toward portraying women as being far more varied, men just remain the same. There's the odd nod toward some aspect of ourselves that reminds us that, hey, human beings are three-dimensional and pretty varied across the board - remember the black-and-white poster of the shirtless metrosexual guy in the Levi's holding the baby? - but for the most part, our spot is pretty cut-and-dried.

That spot is also often marked out for us in both acceptance and refusal. You SHOULD do this - you SHOULDN'T do this. This aspect is WRONG and this aspect is RIGHT. As many choices and lifestyles are discouraged as are encouraged. Even the idea of making your own decisions and walking your own path is, weirdly, a lifestyle choice that societal and media pressures try and guide you towards.

So of course, with an expectation of a specific boundary of behaviour, deviating from that expectation can lead to surprise, dismay, confusion, and at times outright hostility.

This is my Big Macintosh hat. 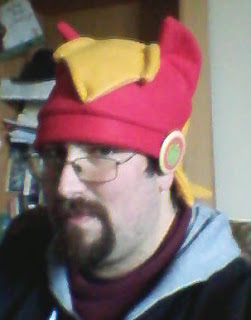 It keeps my head warm, especially my ears. Note the badge, added after-market, for relevant cutie mark. Also, if a reference to everyone's favourite titanic yet taciturn stallion isn't enough, it's my favourite colour.

I was asked today why I was wearing it. My first instinct was to avoid the question. My second was to explain. Reason won out though - it was cold and I was already a little late, so I needed to get going, so "It Keeps My Ears Warm" was as far as I went.

Later, however, I started to question mysef. Why was my first instinct to conceal the fact that I watch a cartoon show? I can be totally frank about watching Transformers or reading any comic books you might care to name, even if I couldn't give a reason why watching or reading those things was good for me, what they brought to my life, or how they could do the same for others.

As it turns out - I have elaborated on why comic books are important to me in a previous blog post. Transformers is similar, though perhaps took longer to adapt to modernt hinking and accept that just because you are trying to sell toys, doesn't mean you shouldn't have proper characters.

More than once, though, I've been asked to explain "The Brony Thing".

Besides, it's just a cartoon show, right?

Well here's the thing. There's a little more to it than that.

I'm an introverted depressive cynic. The first is simply a character trait - the second is a mental problem that I am trying to deal with - the last is perhaps a product of the first two.

So it's not often that I can just settle on something good, and enjoy it. It's hard. I think there's probably more screws loose than just those but, hey, we play the hand we are dealt. It's even harder to just take something that is MEANT to be positive, MEANT to be happy and smile-inducing with a message about caring about other beings and generaly being a better person, and actually being able to access it.

I was calcitrant at first; Heather, however, persisted until I had watched at least the first two episodes.

I watched the rest without any external encouragement.

Here I am now, a man almost two thirds of his way through his thirty-first year on the face of a planet he's ill-suited to deal with on a daily basis. I religiously watch a show about ponies in a magical land learning what friendship means, and you know what? I like it.

I smile a big goofy smile at their antics. I chuckle when they crack wise. I recognise parts of me in some of them, and I recognise things that I want to be parts of me in them too; Twilight Sparkle's initial inability to make friends, Rainbow Dash hiding insecurity under a brash self-confident facade, Applejack's worry about not being as dependable as she needs to be.

Most of all, though, I see me in Big Macintosh. 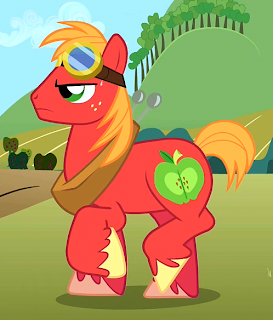 Big, solid and burly. If his sister Applejack is the most dependable of ponies, then surely Big Macintosh is the closest second. When called upon, he displays the fortitude, strength and tenacity of a hero - and is otherwise quiet, content with his own company, keeping his affection and kindness to himself.

The physical resemblance - differences between pony and human anatomy nonwithstanding - is the first sign of an affinity. It's the mental attitude that seals it; because I like to think that if I am needed, if someone calls upon me, that I will step forward and give it my damned best. That I can bull through or outlast anything that drags me down, tolerate any necessary hardship, and not ever stop until I am meant to.

You know what, maybe that makes me more prone to loyalty. Which explains why Rainbow Dash is my favourite of the Mane Six. ...and thus I lead to the point I have been using myself to illustrate...

If I - a depressed, socially anxious, mentally damaged thirty-year-old - can take something positive from this show, if I can learn lessons and improve myself, then so can anyone else. And if anyone has a problem with that, well...

The first is a defensive reaction. "Fuck you, I'm a Brony" is the immediate thought that springs to mind. But it's not the way. It's not what the show teaches us. And so, we must go toward the second.

Understanding. Understanding that insecurity and intolerance comes from somewhere, that it has root causes, that it is a difficult thing to recognise in one's self as a problem and even harder to master after that fact. Understanding that haters hate for sometimes very complicated reasons - and sometimes they hate, just because they've never been shown anything else.

Maybe if we all showed each other a little more love and a litte more tolerance, the world would be a better place. Not just little girls - everyone. From the factory floor to the bank manager's office, from the street to the court, from coast to coast and from continent to continent. Maybe, just maybe, if we had a little hope in humanity - if we did a little more out of kindness, showed a little more loyalty, practiced a little more honesty, gave in to our generosity, and indulged in more laughter - then perhaps everyone would have a better ride in life.

Perhaps then we might start to see a little more magic.

And that's my explanation of The Brony Thing.

...it helps that the show's writing is great, the humour is sharp, the animation is top notch, the characterisation is brilliant - and any show in which a pegasus can fly so hard and so fast that she produces a sonic boom with a rainbow in it is automatically 20% cooler than anything else on television.