Aliens is my favourite movie ever.

To be fair - basically the entire franchise appeals to me in a big way. And by the franchise, I mean Predator and Prometheus too. Which unfortunately also includes the lacklustre Alien Versus Predator, its straight-to-video-styled sequel Requiem, and the highly regrettable Alien Resurrection.

I've loved this series since I was too young to watch it. I hope the Moral Majority don't swoop down on my mother for letting me watch Aliens when I was 12, but I did - and it was one hell of a movie. What's not to like? Big sci fi soldiers, big guns, scary aliens, the works.

The appeal has never gone away. Not really. Especially for Aliens.

What is there not to love about Lieutenant Ellen Ripley?

She was an average joe. Sure, she was a flight oficer, but she worked for a living. Like she put in long hours to earn enough money to afford her lifestyle and look after her daughter. She lives a life that WE live, just different - fulfilling an industrial requirement of society.

She also gets royally screwed over by, ahem, The Man. She and her crewmembers experience a betrayal that was as standard and believable in the late 70s as it is now: profit needs to be made, so who cares if we use half a dozen of our blue-collar sacrificial lambs to grease the wheels? Think of how much MONEY we'd make.

The movie as a tale of bonding and earning respect and finding out who you REALLY are when under pressure is studied in education - the Colonial Marines and Ripley changing roles relative to each other as the stresses and situations of the movie change. It's also claustrophobic as all get-out. More so than the first one, which was set on a spaceship for god's sake. So these personalities all end up rubbing off on each other. 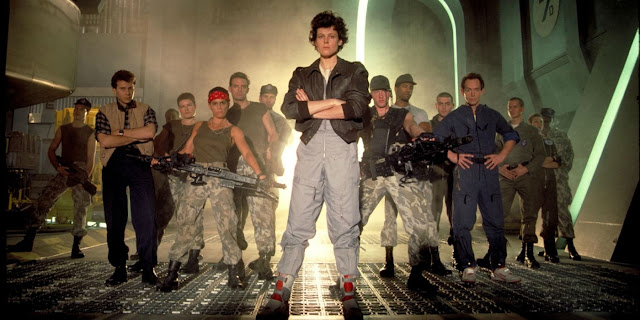 A lot of those personalities are Colonial Marines, and how I love them. They begin as this group of vaguely psychopathic murder-hobos that have little to no empathy toward anyone, but as you get to know them, each of them demonstrate that there's more to them than an M41a Pulse Rifle and the knowledge of how to use it. If there isn't at least one of them that you are a little bit in love with, then you haven't watched it right. I personally burn a torch for almost all of them, but especially the brusque Drake, who meets a melty end facing off against the aliens in question.

The xenomorph... what a creature. What a wonderful, incredible creature. How terrifying. No eyes - taller than us, though not necessarily bulkier - senses that are beyond supernatural, a life cycle dependent on body horror, and acid for blood. There hasn't been a creature, before or since, that has been so perfect a specimen of horror, in my eyes.

So of course the Predators would want to hunt them.

Predators, too - what interesting creatures they are. A permanent hunt, to earn status and respect (and even to pass into manhood). We only had hints of the two species cross-engaging in Predator 2 - the skull of one of the "hard meat" as the Predators call them hung on the wall of trophies - and it wasn't until the extended universe was expanded upon in comics and novels that real stories of the two races (and their interactions with us) could be explored.

...and then they fucked it all up in Alien Versus Predator.

You see, there is a watch list for the franchise, and it does actually make several of the films optional, because...frankly...they are bad.

Chronological order is best - narrative chronology, of course. So we go Predator 1, Predator 2, Predators (a surprisingly good movie if you give it a shot), Prometheus, the forthcoming Alien Covenant, Alien, Aliens, Alien 3 - directors cuts all round, because honestly the cinematic cut of Alien 3 is worthless trash.

We ignore Alien Versus Predator because it frankly doesn't make any damn sense. It's a jumble of nonsense, featuring but not limited to:


We ignore Alien Versus Predator Requiem because, frankly, it's like if the same people as made Sharknado or Anaconda vs Lake Placid directed the first movie. There's an entire fight sequence that is shot in someone's sewer, without any lights - seriously, The Room is better lit than this movie - and by the end of it you are just praying that every single one of the people you've seen on screen gets eaten.It's like The Walking Dead in here. I want them all dead.

We ignore Alien Resurrection because...well, a third of it actually has promise. It's got a scrappy piratical crew of scamps, facing off against the United Systems Military, finding themselves in hot water from a resurgent alien threat. The characters are well-written, believable, funny, warm in places. Gary Dourdan and Michael Wincott do particularly well. But then there's the rest of the film, which takes the lead-up of three classics, folds them into a bowl, and then takes a languid, liquidy shit into it.

So. Predator films, Prometheus films, Alien films in that order - with the noted exceptions - and that is one hell of a weekend's watching. Leaving the best for second to last.

I can watch every single last one of them over and again, but none more so than Aliens, a film whose script I can't not remember. When watching it I have to literally force myself to not quote along with the cast, especially if I am watching it with other people. There's still a couple of lines that get the John treatment ("Alright, we waste him - no offence!"), always.

If you're ever hurting for something to watch - why not check out Aliens? It's the best thing James Cameron ever directed, no doubt.
Posted by John Aridi at 22:18