Once more, folks, we come across the wondrous and sometimes terrifying place that is Readers Request. I will be answering your topics and questions, provided via Facebook and Twitter. I will be answering all of them, seeing as I didn't have all that many. No matter! It means I can natter at length about things, which is one thing I seem to be good at.

Cast thine eyes below! As always, names removed to protect the innocent.

Knowledge = sexy, fight me. - I mostly agree. I could listen to someone pop off about something they are passionate about for hours, though. That's not even a sexy thing. That's a thing. Also I am kind of wary of fetishising someone's intelligence or knowledge, because I don't want to devalue people who don't fit into my idea of what "smart" is. I know, I overthink this stuff. That's me, though - one-man Team Overthink.

Are there any stories, musicians or anything really that changed in a way you initially were wary of or actively disliked that you have changed your mind on and now like? (or vice versa) - More of the vice versa, really. Like when you first get into or find out about something, you can watch it without knowing anything relating to the people who made it or whatever - then you find stuff out and it makes you recoil. One thing I was wary of which I have since found out I shouldn't be was What We Do In The Shadows, the Taika Watiti vampire movie, which I had mistakenly conflated with In Shadows, the Burton/Depp thing. So I just avoided it like the plague. Which was a huge mistake. Also Baby Driver - I don't know why I was CAUTIOUS about this but I was, and then Chris tells me it is super-recommended, and all of a sudden it is one of my favourite movies like ever.

Private lives and public figures.... If you dedicate your life to public service do you forgo your right to a private life? - I have opinions on the notion of a private life. I think everyone's life should be private when they want it to be. I think that the notion that a public figure's life should be an open book because they are a public figure is a bit of a sticky one, given that privacy is a human right. Literally, Article 8 of the Human Rights Act. Should people be called to account for doing shady shit? Yes, absolutely. Should people be hounded constantly even when not doing shady shit? Hell no. I'm sure there is a middle ground between "Media Lynch Mob" and "Zero Accountability". 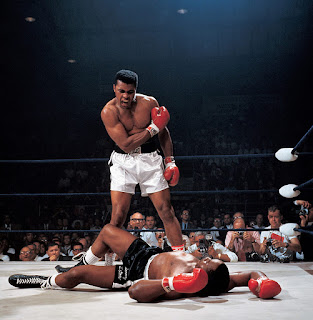 Muhammad Ali standing over (and yelling at) Sonny Liston in victory. There's a lot going on here. It is a photograph, yes, but it's a statement too. It tells you most of what you need to know about who Muhammad Ali was, as a man. Ali had mere moments ago hit Liston with a right hand punch that many believe wasn't powerful enough to do what it did to Liston - but if you ever watch the replay, you'll see his lead foot actually leave the ground when he gets hit. Ali is, in this moment, demanding that Liston "Get Up And Fight, Sucker".

Uranus and soda stream. :) - Okay so. Soda Stream was a fantastic idea that had several problematic limitations, the primary one being that you ended up making lovely drinks at home that still worked out as more expensive than just buying them from the shop, and that was without considering the cost of getting the machine in the first place. Uranus is an awesome planet, goes around the Sun once every 84 years, and is ABSOLUTELY fucking frozen cold. Like the surface temperature is around -200C. So to combine Uranus AND Soda Stream? It wouldn't work. Would freeze solid immediately. ...wait, is this a bum joke?

Weirdest animal mating habits. - So there's three that I find very weird. Snails, who effectively harpoon each other before they get to the good stuff - I mean, that's metal as fuck but also scary as hell, I don't want to be harpooned by a snail even if it's NOT going to try and shag me. There's the male angler fish, who does something that I have seen people actually do, which is attach to and osmose into their significant other to just stop existing as their own entity. But truly, the weirdest one of all that I have ever seen, is...humans. Because we're animals. And because the hoops I have seen someone jump through to try and get into bed with someone else - note, they haven't been ASKED to do this stuff, this isn't something they have been tasked to do by the potential bedmate, this is just things they THINK they should be doing - is just comical. We do this to ourselves, people. WE are the funniest animals.

Which coming apocalypse do you think most likely and what will things look like after? - Well I think the future we are most likely heading toward is that of the Blade Runner / Alien universe (it's the same one canonically). I think apocalypse is less likely, but if one DOES happen, then I think we are looking at something like Terminator, if only because the Soviets actually built a real-life eighties-era computer system that could automatically launch a nuclear strike. A literal SkyNet, just without drones connected to it. If we did it once? Just saying. Arms companies can do basically whatever they want.

Aliens on tv are frustratingly unimaginative - here are some better ones... - Ooohhohohohoh. HAH. YES. Okay. So. Better ones. Every alien species in Becky Chambers' Wayfarers books. The limited alien life that can be found in the James S.A. Corey Expanse novels. Gas entities. Non-symmetrical entities. Creatures from zero-gravity environments that don't have an upright alignment. Creatures from aquatic worlds that DON'T just look like sealife from our own. Energy beings that don't always have to wear shells or cloak themselves (I love you Shadows and I hate you Vorlons but come on now). Anything that doesn't look like a Grey, or a human-animal hybrid, or an elf. A race that was MADE, so it doesn't have certain evolutionary traits - herbivores with carnivore eye arrangements anyone? Also while it is creepy stop making aliens look like Slenderman. That was played out five years ago and it's super-done now. Also if an alien species is going to evolve rapidly on the spot, a'la Life or whatever, make it look cool, not just some sticky white blob. It looked like hair gel.

Why are potatoes so versatile and awesome but we don't treat any other root vegetable the same way? - Cultural stuff probably? Like potato is so thoroughly accepted as being the cornerstone of our diet. And so it is the go-to, so people eat a lot of it as kids, so they like it when they're an adult, so other root vegetables taste different, and we're too busy clawing ourselves out of the muck we live in day in day out to go try new things. ...we should, though. So yeah, fuck it, new root veggies for all!

What traps would you have in your dungeon lair and why? - TRAPS traps traps okay so. My dungeon lair would actually probably be a black glass skyscraper because I'm into that cyberpunk shit. So each floor would contain a different trap. First floor - automated gun turrets. Second floor - hidden spring-loaded poisoned spike launchers. Third floor - CYBERYAKUZA. Fourth floor - razor wire. Fifth floor - laser mesh with a claymore mine at the end of it. Sixth floor - TWO MECHA! Seventh floor - literally just the words "Watch Your Step" written on the door. Eighth floor - perfect height for the snipers in the buildings opposite. Ninth floor - the throne room, which contains the steps up to the TENTH floor, which is the helipad. Which is ready for me.

If you were to have a super-power what would you have? - This changes whenever I think about it for more than two minutes. As of right now, though - I think I would like that healing factor. It would just make my life so much easier. Not even in terms of warding off future damage that I might take, it will hopefully fix the scarring in my lungs and the shit going on with all my joints. Then I'd be happy as a sandboy.

Why is Prince so awesome!? :D - I mean, he was encouraged from childhood. Thoroughly encouraged. He was surrounded by music. Practice plus will plus talent. He wrote songs deftly and with confidence, and he performed them, able to pretty much lay down any instrumental track he wanted. He recorded constantly, wrote constantly, his output was incredible. And in the end, he was so good because there is a song for everyone in his back catalogue. There's at least one song that cuts you to the bone,t hat you hear and can't turn off. If you're lucky, there's more than one. Oh, and by the way, he's basically one of the best guitar soloists ever.

What songs could be about the same thing/event but from different perspectives? eg It's Raining Men and Bodies. - It's The End Of The World As We Know It and Bad Day by R.E.M. are both about a financial crash when viewed from two different perspectives. So Long Astoria and All Signs Point To Lauderdale are both about the same small shitty town, but one person has fond memories while the other just wants to fucking bail. Before Tomorrow Comes and Rise Today by Alter Bridge are both about the same person - the first from that person's perspective, the second about someone encouraging them to do the thing they are doing. There's a LOT of these, it's almost a blog in and of itself.

What equates a 'geek'? - Well now. The actual etymology comes from German I believe. Geck. I think it means foolish. Up until recently, it was commonly taken to mean anyone not of the mainstream - but we can basically assume that geek culture is pretty significantly intertwined with the mainstream at most levels, now. Even if there's levels of geekdom. But there were dictionaries which basically described geeks as carnival performers or "freaks". I remember it distinctly being still used as a derogatory term for people who liked computers or other assorted nerdy stuff back when I was in high school, so I think it got put on like a jacket - a reclaimed word. Sure, we're geeks, so we go to geek clubs and do geek things and the stuff we like is geek stuff. Now it's become an entire aesthetic. It's everything that was classically associated with that lifestyle, that nowadays just isn't. What is mainstream and what isn't has become such muddy water that the word kind of loses all meaning outside of a stereotype of someone with thick glasses and social awkwardness who likes Lord Of The Rings and using computers.

Your perfect pizza? - Thin base, crispy but not unbreakably solid like chipboard. Barbecue sauce rather than tomato - small meatballs, ground beef, nice mix of herbs and cheese, a sprinkling of jalapenos. Delicious. Preferably eaten with a chilled cherry coke, a side of curly fries with salt and a sprinkling of cholula, while listening to good tunes in good company.

Thank you for coming on this trip with me, you beautiful people.
Posted by John Aridi at 15:18