Who Could Be The Bat

If you aren't familiar with Movies With Mikey, you ought to fix that, but relevant to this specific post is this video right here, in which he addresses The Batman Question.

That question is: Who's your dream casting of Batman? No restrictions - could be anyone.

Well, that's inspired a bunch of thinking and a lot of conversation, around these parts.

We all have our ideas as to who Batman is. Mostly informed by our favourite Caped Crusaders in the past. Speaking personally, while I think the best media he's presented in is Dark Knight, the best Batman to ever exist is voiced by Kevin Conroy and looks like this: 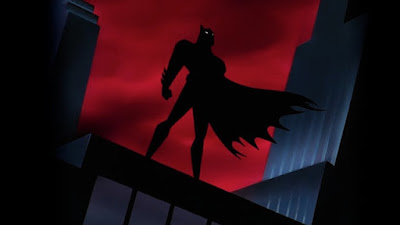 Right, there's all my folks who grew up in the 90s.

Here's the thing. My dream casting of Batman relies on several other bits of information, first, as there's been so many different types of Batman. So are we talking Dark Knight Returns? Are we talking his appearance in Superman: Red Son? Are we taking an entirely new rebooted approach? A campy sixties movie? A Heat-style Batman/Joker crime thriller? Justice League satellite action? Each one of these, I think, deserves a different batman.

I am gonna catch some shit for that, I am sure, but hear me out.

Batman was conceived in 1939. A LOT of the current popular crop of superheroes were conceived way back when. Superman came the year before, The Phantom two years before that - and if you don't know about the Phantom, know that there would BE no Batman without the Phantom, cringey Billy Zane movie adaptation notwithstanding. Flash, Captain America, Wonder Woman, Aquaman - all conceived during the Second World War.

I'm pretty sure you're aware of this, but - back then, it wasn't terribly popular in the West to have a non-white central protagonist. It took until the sixties for Black Panther to make an appearance - and even then, his first showing is to invite the Fantastic Four (ugh) to Wakanda and try and beat them all up to prove himself.

I like to think we've moved on a little since then.

I think you could basically run the exact same story with Batman, with very few modifications, if he was played by Michael Fassbender, Idris Elba, Ruby Rose (see what I did there) or Janelle Monae. I mean, what's a better way of concealing the fact that Miss Wayne is a vigilante superhero than to convince the world that the vigilante is a man? After all, as Batman: The Brave And The Bold taught us... 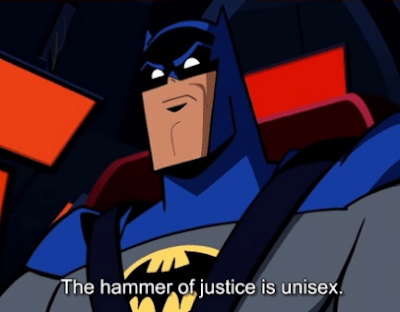 The thing is, though. The thing is. I don't want to just... recast Batman.

I used to love Batman as a hero. Who wouldn't? Then you get to the kind of age where you start asking awkward questions, like - why is Arkham Asylum so easy to escape from, and could maybe a multimillionaire who can afford to fund a satellite for his super-friends to hang out in perhaps afford to help make it more secure? You know. Things like that.

It's after that stage that you get a little bit bored of it. Dude going around punching crime until it stops criming, until it inevitably starts to crime again. The brooding, the anguish. He's so cool. He's a ninja. He's the goddamn Batman.

So let me instead introduce to you a different way that Batman can go. A different breed of Bat, let's say.

We go back to his origin story (and oh my god am I sick of having to see his origin story but that's another thing altogether), wherein we see the Wayne family leaving a cinema. They're happy, laughing. They were invited along because it was through the arts foundation funding provided by Thomas Wayne that the movie was made at all. They decide to cut through the alleyway to where they are parked - Thomas, his wife Martha, and their daughter, Bruce.

Yes, Bruce. It's a great name.

They are intercepted, as always, by a dude with a gun - classically a chap named Joe Chill. Except. this time, it runs a little bit differently. You see, the Wayne family are different, now. Thomas in particular. So when he sees the gunman - who is twitching, sweaty, eyes huge and wide - he doesn't immediately get on the aggro defensive. Instead, he calmly tells the man he'll give him all the cash he has. As long as he gets help. And he means it, too.

Bruce, however, isn't having it. Bruce gets shouty and aggressive, puts herself between her dad and the gunman. Joe Chill starts getting twitchy. Martha tries to calm her daughter down. It doesn't work. In the end the nerves get too much for Joe, and he pulls the trigger.

In the ensuing carnage, Bruce gets hit in the back. Her parents both get shot pretty bad - Martha midway through going for Joe at the time. The last thing that Bruce remembers of that night is her dad leaning over her, telling her that the police are coming, and her telling him she can't move her legs.

The funeral. The husband and wife being lowered into their family plot together. Bruce in a wheelchair, with her uncle Albert stood beside her, holding an umbrella over her head.

After the funeral. Bruce asking Albert how this happened. Why this thing happened. Why people do the things they do. Learning fast, learning early, the state of play of the world.

Bruce deciding to do something about it.

Of course, Bruce's first thought isn't to go off and become a badass ninja. No. Bruce has just come into a huge fortune, and that is her current and primary weapon.

No time to brood. Time to work.

Maybe I'll go into the further adventures of this particular Batman in another blog. I just think it would be a refreshing take on the standard lantern-jawed punch-man. And - yeah, this Bruce would definitely be played by Janelle Monae.

Who do YOU think should play Batman?
Posted by John Aridi at 13:45