They've Got Skulls On Them

I am sure that all of us know at least one person that, observing the Black Lives Matter protests, expressed confusion. Not outright opposition, not mealy-mouthed "but think of the bricks", no; just confusion. There might, likewise, be confusion as to why people might be protesting against the actions of government - not just in the UK or the US, either.

Well. Let's take a look at a comedy sketch by Mitchell & Webb.

Though a lot of people I know won't have to click the play button. They'll just have to look at thumbnail and they will remember the entire thing.

I've probably used this before, but this is for a different purpose today.

Yesterday, 6th June, was the 76th anniversary of the D-Day landings. Now, we talk about that a lot, as part of our history. It's become emblematic, and we forget a lot of things surrounding it, bring in a lot of details that are only obvious in hindsight. Example: we weren't fighting the Nazis to put an end to the death camps. Sorry. We just weren't. The Soviets wouldn't come across Majdanek until a month and a half later, and when they told the rest of the Allies what they found, they were mostly ignored.

Nonetheless, World War 2 informed our media - and imagery used in our media - for generations. Not just the actual stylistic choices of the German army, the SS, etc, but also the propaganda used by all sides. It informed swathes of media as to what was menacing, what certain colours and fashions could imply.

This meant that every single person reading this was probably raised on a whole lot of media that broadcast to you who the bad guy was.

I mean it's obvious, right? I know you know who these people are, you have outside context, but at the same time. Like. Homie on the far left is clearly the bad guy advisor, big shoots with the helmet is some kind of overboss, and despite the fact that she's wearing the same shade as everyone else, it's kind of heavily implied that bun-lass isn't on the same side as the dudes in identical total-concealment skull helmets.

And there's just one example. An obvious symbol of oppressive authority. There's no doubt who the good guys or the bad guys are in this.

Back in high school I thought I was oh so clever because I'd say stuff about the Empire having done nothing wrong. I cringe at that, now. Of course it's done shit wrong. It's an empire, and its enforcement and military is a totally unaccountable force of heavily armed faceless bastards named Stormtroopers. (I mean yes it is also run by an evil dark wizard but you know)

Here's the Peacekeepers from Hunger Games. 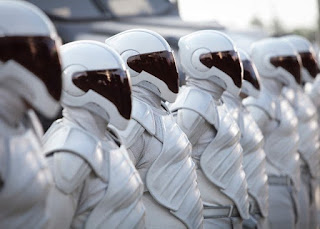 I know that the entire point in a movie, a comic book or a TV show is to have an immediate distinct visual that tells you something about who these individuals are. There has to be an element of telegraphing that happens. You can't just have the bad guys look like the good guys, or you won't be able to build a sense of distrust and fear between the faceless army and the handsome protagonists.

That's the mythology we are sold; the notion that we will always be able to see the bad guys coming - and that our friends will always agree who the bad guys are, because they are injurious to ALL of us, not just in an overarching "injustice anywhere is a threat to justice everywhere" sense but in a "with my death ray I will end your world" sense.

That's the world that people have been raised in for three generations, the fictional shorthand of our modern mythology that repeats itself over and over - in science fiction, in fantasy, in the pale white milky world of the magical school which we won't discuss further.

So you're raised to believe that you will always know your enemy when you see them - and you are raised without being educated as to actions that our nations and our governments have undertaken in the past, which would show you that, sometimes, the bad guys can just take their hats off and pretend they weren't bad guys at all. Or they'll pick up a kiddy and pretend that they're doing the right thing. 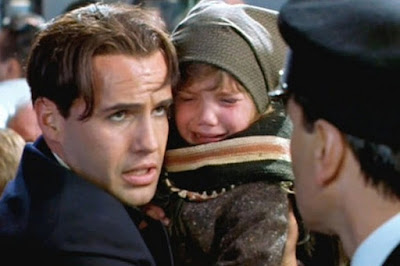 And then it turns out that your friend has identified a set of bad guys. That you were either unaware of or don't necessarily agree with, because they don't look like bad guys, and they've never been mean to you, so - surely...?

Because we have been told, for a long time, that the enemy will be signposted. That they will kick the puppy, they will show up to the tune of ominous music, they will be constantly threatening. Whereas, the law enforcement of the real world are clearly nice people, because yet more generations of media and society has told us so.

I myself have never experienced any harassment by law enforcement, and whenever I have had to deal with them, they have always been respectful and courteous. Aside from whenever I have passed through customs, wherein I have been treated like a criminal, probably because I have a beard and an Arabic surname, but I digress. I recognise that me being treated by that way is a privilege, and that me never having to fear a police officer actually harming me is likewise.

I have had the privilege of learning at a distance, rather than having to adapt to a situation I am forced to be in.

Which is why, I think, so many people balk at general anti-police sentiment. Because the police, to them, isn't some faceless oppressive force, it's that bloke that gave them a bottle of water that time they were drunk in Uni.

Which means they don't have a great way to square this in their head. 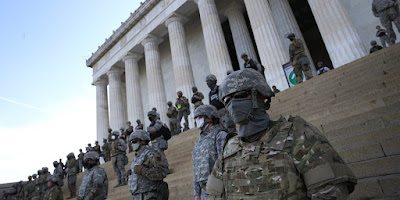 The Lincoln Memorial, earlier this week.

Admittedly I believe these folks are National Guard - I could be wrong. The fact is that a military force has been called in to manage what was a civil process, which began with a peaceful socially-distanced protest against a police murder, is not lost on me.

Sometimes your enemy will be an entire process. It won't be eight dudes wearing masks and toting guns - though sometimes it will be. Sometimes your enemy will be a system that allows those that are a part of it to kill and harm people with little threat of punishment or oversight, and the system already includes a swathe of people who are more than willing to do that to you. Sometimes because of the colour of your skin, your gender, your sexuality, your religion. Sometimes just because they're fucking mean.

A system with a large PR budget, centuries of racism to buoy public opinion on its side, and a large supply of tear gas and rubber bullets.

It doesn't look the way most people have been taught it will look - but it's the reality of the situation. It is what is happening, right now.

Rather than ask you to look up my Patreon or similar I would ask my readers to consider donating to one of the orgs listed below. These are all provided by @malikthesudani on Twitter - it seems like a good list. If anyone you know wants to help, please, share this information. These are primarily US based but then that is where the people are being hit the hardest.

A further list of Mutual Aid Funds collected by @thegirlwithfood can be found here.

This Teen Vogue article is useful too.

I urge you to also do your own research. Don't just believe me. Do the research. Listen to people. Look up what happened to George Floyd, to Breonna Taylor. Remember them.