The three-way split between working class, middle class and upper class is something that has typified much of British history. Who doesn't remember this particular classic comedy sketch? 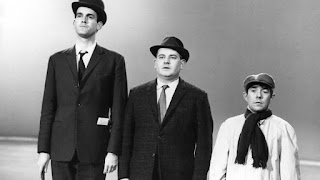 The imagery associated with classism is something that is inseperable from the global image of the United Kingdom. Just think of how we are presented in films originating from other countries. (Dick Van Dyke, I am looking at you.)

The thing is, of course, such class warfare doesn't exist anymore. ...right?

I wrote this blog post over a year ago about - amongst other things - elite panic and the widening gap between the rich and the poor. Sure, the entire notion of breeding and familial obligation doesn't really come into the upper class any more - these days, it's wealth and power, pure and simple. Perhaps, in days of yore when the upper class were held to certain rules and expectations (that they still broke regardless but anyway), things might have been a touch...fairer.

Today, though, the gap between the top and bottom of the scale continues to grow. The gulf is vast and increases every year. The top end tax rate has dropped by 15% in the past 30 years, whereas the income share of the top 1% of earners has doubled from 6% to 12% in the same amount of time, according to the OECD. The average income of the lowest 10% of earners has actually reduced, in real terms, compared to the cost of living.

Wealth changes your view of the world - your perspectives on things. Almost everyone takes some things for granted, and those things differ depending on circumstance.  Perhaps that doesn't create the rigid First World War-like expectations of class divide, but it does create boundaries - and those boundaries create shared self-interest.

When you get down to it - that is what class is. A social group within a divisive stratified system. It's a system that is not only designed to create such divisions, but also to expand the gap between them. That is how it defines itself - its measures for success are also its lines of demarcation.

No longer are our classes dictated by the colour of our collars (or if we wear them at all). Nor are there only three - if I wanted to try and divide them up I'd have to do some real study, though as a starting model I might use the results of this study here.

How does this affect you and I? Well...that's not strictly for me to say, aside from perhaps drawing attention to who makes the decisions regarding the rules and regulations of this country. The people that suffer the most from the decisions are almost always those diametrically opposed to those making those decisions. More and more, we low earners are encouraged to look at each other with suspicion, or to look down on those below us, or to enviously stare up at the heady heights we can't access - because then we won't realise how rigged the game is.

After all, it's an old trick to get all your junior execs to work twice as hard. Tell fifty of them that if they work their guts out, and if they do that, they will get to be a senior exec and earn five times as much. That way you only (eventually) have to pay one of them the extra, for all that added effort.