Well I got asked a very interesting question by my buddy the other day: 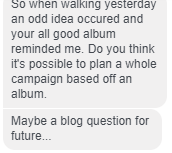 And my response, at first, was just one word:

But then I really got thinking about it.

See, concept albums are cheating, sort of. Like Dream Theater's "The Astonishing" and Nine Inch Nails' "Year Zero" (the latter is only vaguely a concept album, but concept enough). They already have a story, a shared world, a contiguous thematic running through every song. They already proceed at pace through a narrative. Likewise Dream Theater's "Metropolis Pt2: Scenes From A Memory," itself a sequel to a song on a previous album - and likewise a large swathe of Coheed & Cambria's output, Rush's "2112", Daft Punk's "Discovery", Fear Factory's "Demanufacture". All of these albums tell a story, and putting together a roleplaying campaign from an existing story isn't all that challenging.

Of course, you do come across the difficulties in terms of wanting the campaign to be accepting of player choice - you don't want to railroad them too hard, because that gets pretty tedious. Take it from a player who has been railroaded a fair amount. You end up either slumping into inactivity just to let the game play out its course, or you fight desperately against the rails - neither of which are ideal.

So maybe it is easier to take an album that doesn't already have a story, and tie the disparate songs there into a singular narrative befitting a campaign.

Now, you'd have to pick a game based on the album, too. If you primarily play Dungeons & Dragons, then putting together an album based on the bleak audio soundscape of Burial is going to be difficult. Likewise, playing a gritty game of Cyberpunk 2020 to the wizard-based brilliance of Uriah Heep is going to be tonally awkward.

You also want an album that has sufficient breadth for a variety of scenarios to occur. I mentioned Burial? Well if you want your campaign to have a victory parade or any kind of fanfare or ceremony, then you are not going to find it in Burial's back catalogue. That's not a criticism. I love a bit of Burial. I just know the sounds he creates.

So I mean, there's a way to put this theory to test - it's actually doing it.

Let's hammer it down. Let's pick an album.

And I pick an absolute stomper, that I have loved since the first time I heard a single track from it. The record that brought Metallica into the limelight, that taught James Hetfield how to sing and reminded the world that metal existed. The eponymous album, Metallica, also known as The Black Album.

What game goes with this particular epic?

Well with songs like Of Wolf And Man, The God That Failed and Holier Than Thou, some kind of setting with monsters and religion is necessary, but beyond that - we have an open playing field. So let's go with D&D or Pathfinder. (My folks tend to play Pathfinder but I know D&D has a big PR campaign right now.)

We start with, not a setup of the locale or anything, but dreams - and every single one of the player characters is having an awful nightmare. Truly awful. None of this "you're naked in class" bullshit. No. Truly awful. (Enter Sandman)

The characters wake up. It's been the third straight week of awful nightmares in this city, and things are getting desperate. Some people are doing terrible things just for relief, just to get some sleep - things that the local Theocracy simply can't abide, so the adventurers are tasked with putting an end to a particularly troubling incident wherein a man claims the nightmares are possessing him. (Sad But True)

Then a traveller comes into the town. They approach the priesthood of the Theocracy at the same time as the party are being debriefed about the man's reported possession. The wanderer claims that she knows why everyone is having nightmares, and that there is an evil that needs to be dealt with. The Theocracy, of course, throws this out as nonsense - though they clearly know something. (Holier Than Thou)

The party is dismissed. So is the stranger. That night, the stranger visits them and tells them to leave. The people in this town won't survive the predation of the creatures feasting on their nightmares. They are too tied up in their hollow Theocracy and their little lives. They all retire for the night, probably after some philosophical or moralistic banter - and in the morning, the stranger is dead in their bed. And the party are arrested for the crime of his murder. Cast out of the town in banishment. (The Unforgiven)

So they leave. They have to travel a long way, because the town is way out in the desert - it's a long way to the nearest settlement that they haven't been banished from. In this time they run into some evil creatures that attack them - though these creatures are wide-eyed and painfully slender, obviously having not rested or fed properly in a while. (Wherever I May Roam)

The adventurers reach the next settlement - which is militarising. Mercenaries roll in every day, following the crusaders that arrived last week. After some potential initial aggression, the party becomes aware that the crusaders are here to purge whatever evil is giving the entire continent nightmares - an evil located in the town they just left. If they give away where they just came from, they get asked a lot of questions, but it becomes obvious - soon, the crusaders are marching to war. (Don't Tread On Me)

The adventurers are offered... well, a fairly exorbitant sum to march with the crusaders - and if that doesn't entice them, then maybe there can be other ways to convince them to go along. They are about to depart when the town is attacked - by demons, led by a half-demonic werewolf whose bearing and manner is strangely familiar. It is during the battle that the party are made to face their own worst nightmares, brought back from the very beginning session. They have to fight their deepest fears made flesh. (Through The Never)

When the dust clears, many of the crusaders - and mercenaries, and innocent townsfolk - are dead. It is time to lick wounds, count cost, and really look one's selves in the eye. Decide what they want to do. Decide if they can let this evil continue. Hopefully - they cannot. So they saddle up with the remaining crusaders to go put an end to this nightmare menace. (Nothing Else Matters)

It is partway to the quiescent town that the campaign started in that they are ambushed, yet again, by the werewolf - and during the ensuing fight, in which he singles out the party, he brags that his master cannot be stopped. The prophecy is nigh at hand and the entirety of (insert name of region here) will drown in their own nightmares, and his lord will come forth and feast on them! It was so easy for him to conceal himself in this town! To adopt the mantle of a pious priest, to turn the other priests to his way of thinking! So easy for such an alpha predator! ...the party kill him, obviously. (Of Wolf And Man)

Upon reaching the town again, they find it closed for business. Significant numbers of the townsfolk are missing, or malnourished and lethargic. The priests of the Theocracy wander the streets, wailing in despair and yelling snatched fragments of their holy texts. They speak of the thing that lurks in the darkness of their chapel now, of how they cannot sleep because they know it feeds from their nightmares. Some are crazed enough to attack the party - they have lost their faith, they have seen the promises of their god (delivered through the high priest of the Theocracy, now a dead werewolf) come to nothing, they have lost everything. (The God That Failed)

There it is - the temple. The party has the chance to rest up before they make entry. Upon kicking in the doors they find themselves facing down some minor demons, but their real enemy is the crushing waves of negative feeling flooding the chapel. Anguish, hopelessness, hatred, fury, despair, misery. That's the worst thing - crushing misery. It makes what should be an easy fight that much harder, as they fight their way into the catacombs. (My Friend Of Misery)

The final battle looms. The party enter the catacombs - and find a shadow. Nothing but a shadow, that welcomes them with waves of nausea, self-loathing, more misery. As they reel against this assault they notice the shadow split into multiple shapes, with glowing red eyes, forming - yes, it's the trope - copies of the party themselves. The DM should have, by this point, worked out their standard tactics. Turn their own tactics against them and see if they can work out how to defeat themselves! (The Struggle Within)

If they lose, then the shadow absorbs them... and moves on to absorbing all of (insert name of region here). But if they succeed - then a true evil has been defeated. A dark force responsible for nothing but misery and anguish. And as the town and the crusaders alike herald the party as heroes, everyone knows they are going to get some sleep soon.

And there you have it. A campaign from an album.

That was kinda fun, actually.

So, in reply, Pat: yes, yes you absolutely could.