It's Raining Men, Hit The Floor

A lot of folks have seen a variation of this: 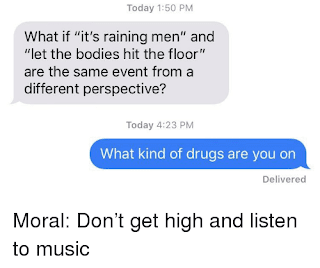 And, yes, It's Raining Men (The Weathergirls) and Bodies (Drowning Pool) are a great example...

I already had a look at this topic as a question which was given to me during my last Reader's Request blog, which you can read over here. I gave a couple of examples. Let us branch out from those, but start quite close to them.

I know this is cheating. I don't like either song but it was a master stroke of marketing to do this - to release a single talking about a mystery girl that our man Eamon is finished with, and for her to then turn around and do the same thing? Right back?

I mean it would be quite something if it really WAS a couple having an argument over the airwaves. I know there's several songs which are actually like it. Diss tracks - there's plenty of those that were exchanged by radio and singles charts.

By definition, though - it is the same event from a different perspective. At least that is how it is presented. As I recall, cheeky chap Eamon was thoroughly confused about who this Frankee was. Then they both vanished into obscurity after tag-teaming the singles chart for two weeks.

The first song - a soldier, charging into his fate in battle. The casual and dispassionate mass slaughter of human beings played out in his eyes in real time, while part of the song is delivered like a eulogy after the fact. "Now an empty shell," the line says. Also the chorus. "You coward, you servant, you Blind Man."

It doesn't explicitly state that he dies.

And in One, which is famously about a situation presented in Johnny Got His Gun (and uses movie footage from it in the music video), we are presented with a man who - "Now that the war is through with me, I'm waking up, I cannot see."

I think you are seeing the same man from two different points - before he treads on the land mine that sends him to that hospital bed, and the existential torment that follows.

A revolution, you say? Like the one Tracy Chapman was talkin' about?

It is again a case of perspective, and What A Beautiful Day is a far more snide look at how the events of the overturn happened. The cynicism behind whether it will all do any good, and how it comes about, and the end result. Almost like a journalist from a foreign nation, reporting on the toppling of a hostile religious government, and the chorus is the commentary from the people the singer is interviewing.

Won't Get Fooled Again is a lot more happy-go-lucky. The singer knows the cycle of peace, war and revolution, has been through it before, has seen it before and knows it will happen again. There's little cynicism there. It's an acceptance of the thing that is happening - as if it needed to happen, and they are glad that it has. Though perhaps there is a little knowing wink in the title. "I get down on my knees and pray we won't get fooled again."

Chance would be a fine thing, lads, but play on.

Okay, back to the Front.

Two soldiers we see before us. We see one moving through their career, and in the process, coming to question everything that they thought was true. They follow orders. They do as asked, even as they know those things are morally and legally wrong. They do too much, and they come home, not sure if they are really the soldier that left - not proud any more, no more than a hollow shell with medals on their chest.

The other, soldier - we see him for the scope of one operation, and in that time, we see a duality. It isn't a creeping insecurity. He already knows that something is wrong - he already knows that this isn't a thing that should happen. He's disconnected from it already, and just running through the motions. He even seems to double down a little - repeating to himself that God Is On Our Side, and telling those that listen that this is the way it's going to be.

And this last one is a doozy.

"I can tell you my love for you will still be strong, after the boys of summer have gone."

I don't know how much time separates the two songs, but a fair while - has to be, surely. If only because in Boys Of Summer, Don Henley tells us all about how he thought he knew what love was. That implies youth - as you get older you realise love is a million different things to a million different people.

In Boys Of Summer, the singer's dream girl is busy. She's busy with, presumably, the boys that come around town during the Summer. We know they had a thing together once - though precisely how much that meant to her, we simply don't know. What we do know is that it meant a lot to him, enough that he can't get her out of his head eve when he knows she is (presumably) off with other guys.

The promise is that he'll love her when the others leave.

The singer is at the lady's house, and he asks her to come with him if she wants to. He tells her that he's no hero, but he is who he is, and just maybe, she might think that is enough. He urges her to not waste the Summer waiting for "a saviour to rise from these streets" - another boy of Summer. He references, too, the boys she sent away - boys who scream her name in the street, desperate for missing her.

Presumably, by the tone of the song, the lady - Mary, Springsteen names her - accepts the offer. The two get into the car and drive, to try and make it good if they possibly can. He really did love her after the boys of Summer had gone.

At least... that's one way this could have panned out.

There's an alternative option, of course. That Don Henley is truly a different perspective - that he was just another one of the boys of Summer that Mary dismisses. One of those left with ghosts in his eyes when he gets sent away - the ghosts of her, her hair slicked back and her wayfarers on. The ghosts of her, walking real slow, smiling at everyone. Ghosts, that he can see everywhere.

I'm kind of glad she ended up with Bruce. No offence, Don.

So there you have it. Five different events, ten different songs.