What is the thing you think of first when you read the word, Luddite? 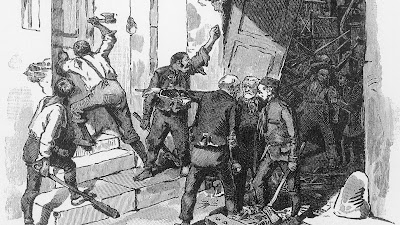 I would place a sum of money (not a large sum, I'm poor) on the fact that you would imagine a group of people scared of machines, scared of progress, scared of the future. Wanting things to be the way they always were before.

Certainly, in this day and age, that is the semantic connotation it holds.

Except, that isn't actually the true definition, which I will provide below.

Labourers whose livelihood revolved around manual work were right to be afraid of the machines that were being made in the early nineteenth century, if only because of the people who could afford the machines.

Automation was marketed to the worker as a way to make their job easier, a way to free up the hours of the day. It was then used by their employer as a way to cut costs, which did lead to reduced prices, but also to significantly increased profits.

Could the workers of the period really trust that their employers, that the class of business owners that they had to work for, would have their best interests in mind? Keep in mind that, at this period of time, less than 5% of the population were even allowed to vote.

So when they saw the way the wind was blowing - when they saw that they, as a group, would start to lose their livelihood to the machines that could to the work of a dozen of them individually, and that the factory owners wouldn't hesitate to replace them - they took their tools to the machines, and beat shit out of them.

Which, when you think about it, is just the next step after a labour strike.

Is it a coincidence that, two hundred years later, our linguistic shift has made this movement - which was brutally suppressed by the government and factory owners alike - sound like weird technophobes? Cavemen scared of thunder?

(It bears mention, as an interesting aside, that Lord Byron was one of the most outspoken critics of the government's treatment of the Luddite movement. In a pleasing turn of events, his daughter became the world's first actual computer programmer - you would know her as Ada Lovelace. If you don't know her? Go fix that.)

So how is that particular situation related to our lives today?

Whenever a new technology comes about - whenever some interesting or inventive thing comes into the public eye - my immediate reaction ("Wow, that's kind of cool") is almost immediately undermined with a moment of critical thought, which is almost always followed by a measure of sadness and cynicism.

If Black Mirror - yes, the Charlie Brooker show - has taught us anything, it is that any new technical advance or life-enhancing gadget can be made menacing or detrimental with little effort.

Imagine how much simpler life could be if you could have, with a relatively painless implant, a universal ID system. Like, you just hold your hand over a thing, and your ID pops up. It can store your bank details, your driver's license, your passport, all those store cards you can't find any more, bus pass, the works. All in this one implant, that you can't lose. It's always on you.

I bet, halfway through that paragraph, you had immediately thought of several ways in which that could be used to undermine your civil liberties - and you can guarantee that is exactly what would happen. That we could be tracked, with relative ease. That companies would want us to BE tracked. That we'd be told that if we haven't done anything wrong we should have nothing to hide. So it goes.

The first person to come up with automated cashiers probably didn't immediately realise that they were paving the way for shops the world over to do away with a proportion of their staff and overwork the remainder - and probably not reduce their prices much.

This is the shit the Luddites took arms against. Literally.

Three facts that are connected:
Got to be honest, I'd start smashing the machines as well.

If you'd care to share my blog with your friends, I'd appreciate that! If you'd like to thank me in a fiscal form for entertaining you a little bit, I do have a Patreon right here, but please - no pressure. Thank you for reading, and check my social media to the right to keep in touch.
Posted by John Aridi at 12:34