Part Of A Montage

I am fairly sure that everyone has seen at least one movie which is set after something really awful happens to the world. 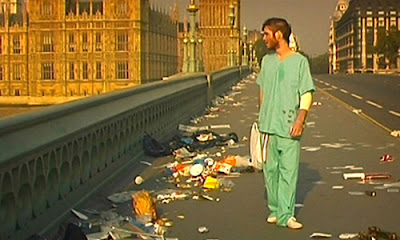 It happens in TV shows, movies, the works; and when it happens, often, we are treated to an explanation as to why. (Sometimes we just aren't, which has a varied level of success in terms of storytelling.) Sometimes, the Why is conveyed with a minimum of exposition, and is shown to you via the storytelling in the world as it stands now, like in (picture above) 28 Days Later. Sometimes, the Why is told to you by LITERAL exposition, such as in Mad Max, when the story of what happened to everything is conveyed to the watcher by a narrator.

A more modern technique, though - something that has come about due to our increasing savvy nature with news media, being able to recognise certain tropes, and having over fifty years experience with watching how events have panned out in the news - is to cram the beginning two minutes (and half the opening credit sequence) with a jumbled montage of news clips detailing precisely how we went from "The World We Live In Right Now" to "The World In The Movie, Which Is Awful".

Here's an example - the opening to the 2004 remake of Dawn Of The Dead.

In the movie, this has to convey a lot of information to us relatively quickly - or at least, it has to give us a sense of what is going on. We have to feel unsafe, we have to understand that social order is breaking down, and we have to have a vague idea as to what has caused this to occur.

It all flashes by, and bam. There we are, watching Max Rockatansky hurtle down the highway at 90, or seeing how someone survived the first ten minutes of a zombie outbreak, or listening to an emergency session of the UN talking about their "only possible solution".

It's a good trick. It puts us into the world, into that mindset of everything going wrong, of the entire construct being turned up on its head - without making us live through it. It gives just a taste of the barren wasteland we are about to march into, before the protagonists show up.

That's why it has to be quick, see - or it gets bleak, and we realise we don't actually want to stick around to see it get worse.

Has anyone else seen the news headlines recently? 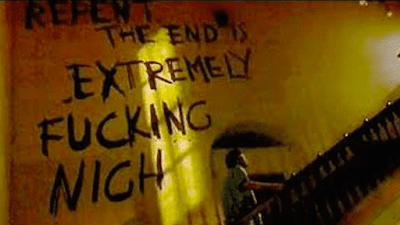 I know, we aren't looking at the world being torn apart by a zombie apocalypse - but we are seeing a lot of shit going wrong, and a lot of stuff creeping towards going more wrong.

Of course, the problem with this is that those news headlines - the ones that are crammed into about a minute's worth of footage to show society spiralling down the toilet before the narrative solution presents itself - is that they are spread out throughout our normal, day-to-day lives, which are tiring and long things, filled with their own concerns.

To take a hop sideways, to the beginning paragraph of The Call Of Cthulhu, 1928:

The most merciful thing in the world, I think, is the inability of the human mind to correlate all its contents. We live on a placid island of ignorance in the midst of black seas of infinity, and it was not meant that we should voyage far. The sciences, each straining in its own direction, have hitherto harmed us little; but some day the piecing together of dissociated knowledge will open up such terrifying vistas of reality, and of our frightful position therein, that we shall either go mad from the revelation or flee from the deadly light into the peace and safety of a new dark age.


It IS hard to draw correlation, to paint an accurate picture of where the world is going, when one is living in it. We don't have information about absolutely everything that would help us make decisions or come to decent conclusions. There is a LOT of misinformation out there, too - some of it deliberate, some of it less malevolent.

Some of us, though, are on the contact edge of the bad shit that is happening.

A bout of collective amnesia descends on all those who help to contribute to xenophobia the moment something awful happens to... well, those that they are xenophobic against. They hope that, because now they are saying the right words about the awful thing that just happened, we won't remember that - actually - they were talking shit about the culture the victims belong to not so long ago.

In the montage of the world ending, we would see a three-second clip of a politician being blatantly Islamophobic like oh I don't know let's say Fraser Anning, an Australian senator who has gone on record as stating that "Islam is on a mission to take over the Western world and implement sharia law".

We would then see the aftermath of the Christchurch shooting, in which fifty innocent Muslims were murdered. The correlation would be absolutely obvious.

This isn't the beginning of a movie.

For some of us, we feel the anxiety that the world is facing collapse soon, maybe imminently.

For some of us, the world came to a literal stop on Friday.

So how do we stop the montage running before more of us pay the price?

I won't end this blog with my usual exit spiel. It seems trite.

Just... please. Do what you can to make things better.
Posted by John Aridi at 14:17