You know how last time I talked about ideas and where they go to die? The reasons why they don't work?

Well, here's something I dwell on semi-regularly.

We've all been there. You get out of work, and you realise you have to get yourself something to eat for that night, and something for the morning before you go out and do it all again, oh and some toilet paper, and maybe a snack, so you trudge your way around your local shopping place.

You avoid the guys somehow drunk already that are trying to buy cigarettes. You grab your dinner, and dinner for tomorrow because you're smart like that. You circumnavigate the older folks who are double-stacked in an aisle because they're talking about something unrelated. There's the bog roll. There's the breakfast. Oh look, those things you like are on sale. Grab them too.

You check your mental shopping list. We got it, we got everything. All that's left to do is go pay.

And now you are presented with your choice.

Out of the eight checkouts, two of them have people sat at them, and one of those has the little thing out to indicate no more customers please - they're half an hour late going home already because nobody's come to relieve them - and then...

...and then you have these guys. 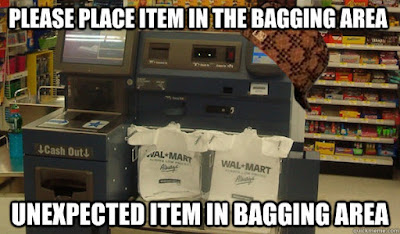 I will say up front that I use these things quite a lot.

One reason is that, when I am done for the day, my social batteries are empty. I kind of want to deal with people as little as possible. This may come across as arrogant or elitist, but it's more just... god, I am a stressy mess when I'm tired and in pain, and I don't know how anyone else deals with me. So it's at least halfway sparing someone else the bullshit of dealing with me.

"But John," I hear you cry, surrounding me in the street and pointing, always pointing. "But John - you're usually so very much on the side of the worker! How can you patronise these soulless bastard-machines!?"

I mean, I'm not gonna deny that they are annoying. Even when properly calibrated they kind of train you to do everything at their own pace and in their own way, otherwise they don't co-operate. Sometimes they don't co-operate because, well, they don't really want to. If they break, there's a good chance that you are waiting for days for repairs.

Unsurprisingly, given that they are generally annoying machines and also appear to be replacing actual workers, there's movements against using them. Campaigns to suggest not using them, ever. Lining up in a queue for as long as it takes - anything, rather than using those new-fangled robot overlords.

So... picture this. You walk into your local big ol' grocery store. Not like a Happy Shopper or a Spar or something - like a BIG place. In the US, think Wal*Fart. In the UK, think Tesco or something. You got it.

And there's... like 25 regular checkouts. 25. But only 12 of them have people at them. And there's about 24 self-service machines. But nobody's using those, because they stand in solidarity with the workers.

Except the number of checkouts - regular and self-service - is predicated on the store's average footfall. Guarantee you there's been analytics done and they have worked out how many or how few they need. They just happen to be low-balling the amount of staff available right now because nobody has any money so people are buying less so nobody has any money et cetera.

So the staff on the checkouts are having a hard time, now. Because everyone wants to use them, and that means people are waiting longer, which puts people in a bad mood, and it's no fun being rammed in the first place. But it's okay, right? It's all in solidarity with them. And it isn't the customer's fault they are being put in this position, it's management. Right? It's corporate.

Yeah, it is corporate. And guess what?

Corporate aren't gonna change their current policy when they've already paid the thousands upon thousands of pounds required to install those machines. 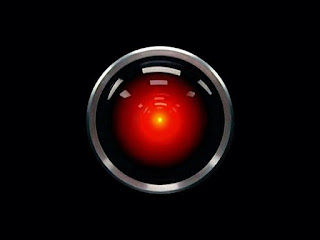 See, the current methodology behind dealing with problems at work is as follows:

1) Make staff bear the brunt of the hardship.
2) Failing that, pass the suffering on to the customers, as long as they still pay.
3) Don't piss off the shareholders.

We all want better rights for workers, because we are workers. We work for a living. We don't want to get treated like dirt just to make sure that the reduced amount of money coming into a business can still maintain management and shareholder income levels.

I'd like to think that direct action like customers not using self-service will work. I don't honestly think it will - not unless it is accompanied by a far more wide-ranging overall campaign.

Unionisation, for one. Get organised. Get legal representation. Get members of the public involved. Spread good information about the facts of the situation. Push for your peers to enter management if at all possible, to try and change the abiding culture. Vote for pro-worker political parties. Organise.

I know it's difficult - I know it takes longer than just using a different lane. I know it isn't as trendy or as funny as talking about how much we all hate self-service machines.

But it IS effective - and if you don't work at one of these stores, then I promise you, you know someone who does.

We're all just rats in a maze down here. Let's see if we can't spread out some of this cheese.

If you'd care to share my blog with your friends, I'd appreciate that! If you'd like to thank me in a fiscal form for entertaining you a little bit, I do have a Patreon right here, but please - no pressure. Thank you for reading, and check my social media to the right to keep in touch.
Posted by John Aridi at 14:13