A couple of days ago, Philip Schofield - UK TV personality, presenter, and generally quite nice man - came out as gay on This Morning.


Long-time readers will already know that I'm in support of people living their lives and am very much against homophobia, so more power to the man.

Not much for me to add to that. What I'd really like to address is how people reacted to this particular bit of news.

There's several brackets of these responses, so I am going to address them in broad groups, without calling out anyone specifically. Understand that - if you take personal offence to me dissecting your response here? I probably still respect you, but you need to think about why your responses are what they are.


I Knew Already, It Was Obvious

You almost certainly didn't unless the man spoke to you or you had any actual direct evidence. What you had was a presumption based on several stereotypical behaviours, stereotypes which are harmful to continue to engage in, simply for fact that telling people that having a certain kind of personality or temperament is indicative of their sexuality is bullshit.

These are things you should do as a matter of course. They don't mean a damn thing in terms of who you are attracted to, sexually, romantically or otherwise. Telling men that they are perceived as homosexual if they're just plain nice is telling.


It Doesn't Make Any Difference To Me, I Don't Care At All

I understand where you are coming from and that probably seems like a sensible attitude to take, it kind of ignores the society that necessitated the very act of "coming out". That is something we should care about - that daily, people need to make the choice whether or not to actually express who they are, or continue to hide it.

There will be those that feel it is "making an undue fuss", because it doesn't directly affect them, and they can't necessarily perceive how it would be important. It is through awareness that we change society. A lot of people change their minds about how they treat minorities when they find out that one of the people they know or respect is a member of that minority.

How many stories have you heard about someone being a massive homophobe until their cousin came out as gay, and then all of a sudden the tables were turned? I hate that it sometimes takes a personal connection to an affected group to change a behaviour, but sometimes that is what it takes. So we should care, when someone decides to open themselves up like that.

This ties in to the next segment.


He's Been Lying To His Wife The Whole Time, That's Not Right, How Can He Be Gay If He Has A Wife And Children

Here's a picture of Phillip Schofield as I first came to know of him as a TV presenter - this would be The Broom Cupboard, from the late 80s. Here he is with one of his co-hosts, Gordon The Gopher. 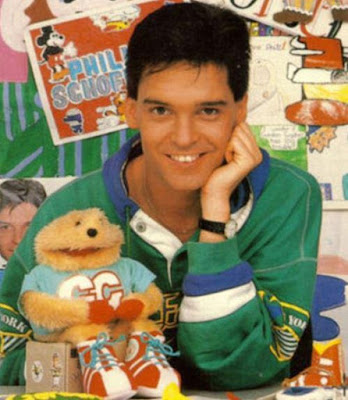 During this time, a law was brought into effect in the UK. It's a rather infamous law. Anyone that knows their stuff will probably guess which law I am talking about. It was called Section 28 for short - Section 28 of the Local Government Act. It specifically forbade the "Promotion Of Homosexuality," and specifically the promotion of "The Acceptability Of Homosexuality As A Pretended Family Relationship".

Read that a couple of times.

So I have actual personal experience of what this law resulted in, because one of my school teachers - an excellent teacher who encouraged me in my work and led to my love of the written word - was sacked because it became public knowledge that they were homosexual.

Not that they were promoting anything, but then, that wasn't the point of the law, really. It wasn't conceived in the notion that you would have individuals handing out pamphlets trying to convince you to become homosexual because it's better. It was because you could spin "not demonising gay people" as "promotion". It was because you could dress "actually it's not weird or wrong or sinful to live like this" as "promotion of acceptability". It didn't criminalise homosexuality - which had been partially decriminalised in 1967 (Schofield was 5 at the time) but wasn't fully decriminalised in the UK until the 2000s - but it criminalised talking about it, becoming effectively a legally binding ancient taboo.

People were literally being sacked for being gay. Newspapers would run front-page splashes on celebrities for daring to not be heterosexual. It isn't a wonder at all why the term "gay" became an insult in schoolyards in the late 80s - because society had decreed it as something wrong and bad and unjust and awful, that you should be ashamed of and never speak about if you were one of those people that dabbled in it.

That's the world that Schofield - and many others like him who have since had to have this conversation - grew up in, worked in, lived in. A world where your entire career vanished if they discovered your sexuality.

And by the way - if you stayed single for long enough in that era, people assumed you were gay anyway. Heteronormative bullshit also includes a byline in being married. Everyone is straight and everyone gets married and has kids. If they don't there's something wrong with them. Then god help them.

When do you think Section 28 - which, by the way, was the brainchild of the Thatcher government seeking re-election, and deliberately pitched to undermine alliances between LGBT support groups and labour unions - was finally actually repealed?

September 2003. The Labour government brought in a bill to repeal it in 2000, but was shut down by Baroness Young in the House of Lords. Yes, a Conservative. Theresa May - yes, THAT Theresa May - said that the repeal being defeated was a "Victory For Common Sense."

When your government is so thoroughly set against you that they will pass laws against you for forty years, you'd probably hide who you are too. The man said he'd spoken to his wife already; that must have probably been a harder conversation to have. It's none of our business how she took it.


I Don't Like Him Any More, I'm Going To Stop Watching This Morning Now

Congratulations, you are part of the problem. Go away. Don't read my blog any more. If you liked him just fine before you knew he was gay and now you don't, that makes you homophobic. Take a good hard look at yourself.

I mean, that would be fair enough.

I get it, straight folks. I know it can be difficult to work out why people react the way they do. That's mostly because until recently the western world was pretty much exclusively set up to cater to you. We have a lot of preconceived notions we have to start chipping away at before we have actual equality. It isn't that people should feel safe coming out - they SHOULD - we should work toward a world were somebody doesn't have to come out at all.

If you'd care to share my blog with your friends, I'd appreciate that! If you'd like to thank me in a fiscal form for entertaining you a little bit, I do have a Patreon right here, but please - no pressure. Thank you for reading, and check my social media to the right to keep in touch.
Posted by John Aridi at 12:03