Lacking any further inspiration I decided to do a casual ask of what people would want me to talk about - not a full blown Reader's Requests, but more of a... Pals Postulate?

I got some good ones.

The first one, though... 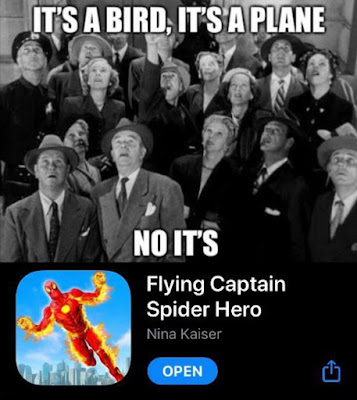 See I could have gone my entire life not knowing this existed. And then it was brought to my attention by the birthday boy - happy birthday Chris by the way - and now I have to acknowledge its existence, and so do you.

Random Acts of Kindness :) - See, this is nice. This is real nice. Random acts of kindness are great. When the current state of the world is so cruel - and I am not looking at anyone in particular, but the government doesn't help (pick one, any one) - the kindness of strangers can be that little thing that makes your day. So a challenge for all my readers: be kind to someone you don't know in the next week. In a small way. Just try it. In whatever way you can, given our current pandemic scenario.

One thing that has made you happy (or smile) today. - This image of my villager in Animal Crossing surrounded by ill-gotten wealth. 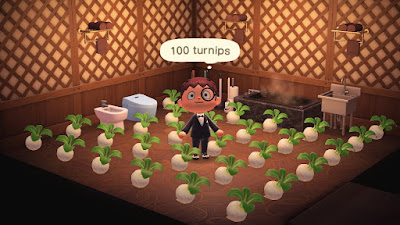 Self isolation self care - Christ, uh. ...I don't know. ...do the things you need to do, don't be too hard on yourself if you don't or can't. Be kind to yourself. That's the important thing. Try and do something each day that you want to. Don't beat on yourself because of the state of the world. It's not your fault, and it is going to affect your mental state. Specifically if you are tired and lacking a creative spark, that's a trauma response. You can't just "oh well bugger it" your way through that. Be kind to yourself.

Favorite piece(s) of escapist fiction. - I find myself going through and reading comics and books that I already know, at times. Like I'll go back and read Lovecraft or Rising Stars or similar. I like watching movies I am familiar with, too, or chortling through old MST3K episodes. Remember that cheesy movie from the 80s/90s that is awful but that you kind of like? Bang THAT on. I like stuff like Empire Records, or Blues Brothers. Something with good music is a must.

Gardening (my potatos just started sprouting!) - I am AWFUL at gardening, which is probably no end of shame to my mother. Physically incapable of engaging in it for more than two minutes at a time, I don't know my Gardenias from my Chrysanthemums, I could probably keep a cactus alive but that's only fifty fifty... but I'm glad you are having success! Especially with potato - one of my favourite things ever.

Concellation, how to get over con cancellation blues - ...see... I have difficulty with this because I find myself having to cancel so much myself. Have done for years. It sucks. I don't really have an answer for it; not a good one, anyway. In the end I had to dial back my expectations of things I could do, health and budget considering. Though the thing that I would probably comfort myself with, over the current crop of con cancels and event cancels and stuff - I could use the money I was spending on that to, when isolation has been over for a week or so, rent a house for a weekend with the people I was gonna see at Con and have a RIOTOUS party. This shit WILL end, and when it does, it's going to be so sweet.

Having more time on ones hands, but suffering even more lethargy while everyone else seems to be learning new skills or doing fabulous buildy things. - Ah, two fallacies to defeat here. One: Not everyone else is doing fabulous amazing things or learning stuff. Sure, some people are, but a lot of people aren't, and - honestly, some people are just like that. They always have something going on. Two: You aren't a worse person because you aren't doing that shit. Everyone is on low ebb and low energy right now. We as a nation - as a SPECIES - are currently undergoing a combination of anxiety and depression brought on by external factors. As someone that suffers from both of those on a daily basis and has done since for over two decades, not being able to learn Italian when you are afraid for the health of those you care about and crushed by the state of the world isn't a crime, it's normal. Focus on what makes you feel better and helps you cope, not what other people are doing.

Glad it's not just me - See above.

Isolation meme's - I haven't really kept on top of these but I will present a couple below that I liked. 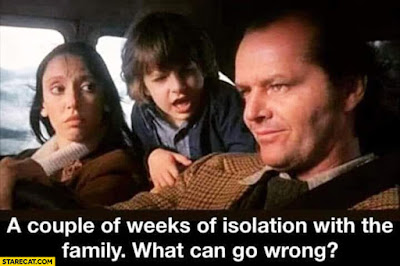 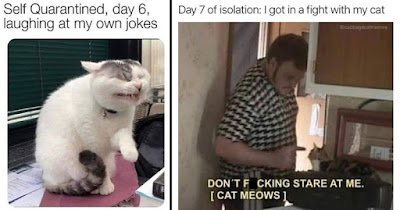 "This Is Us", An Article In The Washington Post - Yeah. Like I read this and just nodded the entire way through. I am very privileged insofar as my mixed race hasn't led to any actual problems in my life, really. But this is just... yeah. Accurate.

Favourite toy lines and when they bringing em back - Gawd. M.A.S.K., Jayce & The Wheeled Warriors, Centurions, Starcom, Transformers - all of those NEED bringing back, aside from Transformers, which only had a lull and never really went away. The current line is frankly amazing compared to G1.

What is it about your 20's that screams, ' itll never happen to me/mine"? - Hate to say it but that isn't a 20s thing, that is a people thing. It's across the entire generational spectrum, even if it is mostly prevalent in your childhood years and bleeds out when you hit your mid-20s (because by then it HAS happened to you or yours). The majority of people fucking about in this current climate of nonsense are certainly old enough to know better. Most of the 20 year olds have been told they are essential and forced to risk their lives with no pay rise or protective equipment. They are keenly aware it may happen to them. They just don't get a choice - it is that or be made homeless and starve.

Isolation.... People who live alone in isolation.... How to cope and not go mental in isolation... - I count myself lucky insofar as I cope with being alone really well - I like my own company. I know other people that aren't so lucky. I don't really know the answer to this, aside from trying to make sure you stay in electronic contact with the people that you can. I know it isn't much, but it's way too easy to slip into not doing that, too, so keep it up. Voice-call people that you know would be okay with talking. Play games with folks. Download Virtual Tabletop, pay cards with folks. That's about all I got... oh, and listen to music literally as much as you can.

Best ways to represent passage of time in movies/series. - Okay, there's a lot of good entries for this one. But for propriety, I am picking Red Dwarf, Season 5, Episode 4...  Quarantine. When Lister is marking up the days on the chart, and turns around, with a fucking great black eye, looking awful. That's all of us right now.

Something light maybe - a list of the cutest baby animals?? The best reasons for day drinking? Ways to show you love someone? Most uplifting music of the last 3 decades? - The cutest baby animal is a Skunk, there is no contest, though raccoons and pigs are close. The best reason for day drinking is the song Never Forget You by the Noisettes. Lots of way to show someone you love them, all sorts of kinds of ways - touches, words, sharing music, gifts, thoughtfulness. All sorts of ways. The most uplifting music of the last 3 decades is a hard one but have some Hozier, because this song is amazing.

And now a personal statement.

My people. We can get through this. I know it sucks, right now. It does. But we can do this, and there might just be a better place waiting for us afterwards.

...also if any of your friends have patreons or kofi accounts or are selling art, take them up on it. We're all hurting right now.

Yes, that was a cheap plug.

If you'd care to share my blog with your friends, I'd appreciate that! If you'd like to thank me in a fiscal form for entertaining you a little bit, I do have a Patreon right here, but please - no pressure. Thank you for reading, and check my social media to the right to keep in touch.
Posted by John Aridi at 13:29