I hate to remind you all - I know we spend a lot of time not thinking about it - but Donald Trump is the president of the United States. 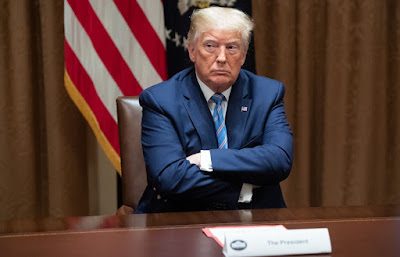 We couldn't believe it when it happened, we are still in a position of disbelief each day, and when it comes down to it, I think we'll write off these past four years as some kind of mass hallucination. Maybe.

I'm not going to dig into his policies. I don't feel the need to. You know where I stand on the topic, as a human being with a degree of empathy.

However - it seems that the populace have become aware of this man's con artistry and general awfulness. He is polling terribly. Almost every poll for the entire US has him behind Joe Biden - who, lets be clear, I am not super stoked about getting the job either, but if we're picking an STI, I'll take the one that itches the least.

I am aware that the popular vote isn't what actually decides the US electoral process, which is its own problem. Which just adds an air of uncertainty to the whole thing, that accompanies another level of uncertainty - mass vote manipulation. A large swathe of US citizens, by various means, having the ability to vote taken away from them. The attempted dissolution of the postal vote / US Postal Service, the mass incarcerations and criminal charges following protests, the closing of polling stations in areas that classically don't vote a certain way.

Can all of that overcome the damage Trump has done to himself?

And if it doesn't - and if he loses - if the electoral colleges do what they didn't do four years ago...

Well, he's implied - indirectly, in a kind of Schrodinger's Idea kind of fashion - that he might not accept the result. For a variety of reasons.

I say Schrodinger's Idea because - well, you've all known someone like this. Someone that will float something that most people around them won't gel with, without seeming to be very invested in the notion. Just a joke, they'll say. Just trolling. Just being funny. Just to see who bites, and who doesn't - to see how much resistance there is. It's a classic abuser technique, as it happens.

This happens a lot in politics. An idea will be "leaked" and the backlash measured. This happens because the idea is potentially socially costly to the people fronting it up, often because the idea will (if executed) be harmful or detrimental to a significant swathe of society as a whole. It's a case of trying to see if they can make it fly, if they can convince the populace of the merits of the notion (real or imaginary) rather than have them focus on the flaws.

Look at Brexit; the idea was floated as a "Just A Thought" concept back in 2013, when David Cameron started making noises about renegotiating our EU membership. He wasn't idly speculating in the pub with his mates, he was seeing what we said and did about it. There wasn't an immediate uproar against it, and the anti-EU sentiment had been stoked gently and quietly for decades, so that's as much license as he and his needed.

So what happens if Donnie goes through with it? What happens if he barricades himself in the Oval Office and plugs his fingers in his ears? 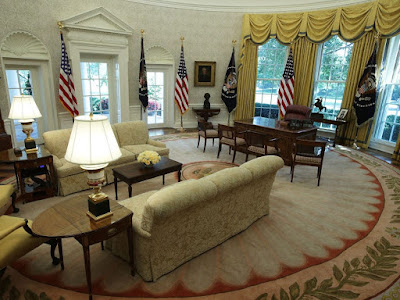 Fact is, we aren't sure.

If the army, or the national guard, or the secret service, or even the FBI or CIA, have protocols for this kind of thing - they haven't been made public. I would like to believe that they DO have a protocol for this kind of thing. As anathemaic as it might seem for the democratically elected head of state to refuse to leave when the state elects someone else, coups are a semi-regular occurrence worldwide, so it can't be that alien a concept. Especially given that the CIA funds so many of them.

What really matters, though, is what the rest of the executive decides to do.

There's a lot of people in the White House that are only there because they're friends with this dude. There's a lot of folks that have benefited hugely from his being in power, because you can get away with absolutely egregious shit when the entire population is standing in slack-jawed horror at the last thing the president himself has done. I daresay that they would support his barricading, and would try and stir up their base to action - which means boogaloos and proud boys all over the place, and probably a bunch of Klan as well.

Everyone else, though? Senate, Congress? It might benefit them to just... pass on executive power to the person that won the election. Like, it doesn't matter that Donnie is in the White House right now, he's not the one in charge. He's not the President any more. He's just a guy in a room, surrounded by useless sycophants.

Technically speaking, the US military wouldn't have to obey his orders any more; and given how he has treated them at various turns, I don't think that there is a significant ground swell of Trumpism amongst the upper echelons of the Pentagon. So I would predict that the army would go along with the status quo, and refuse to assist the former President - though I doubt they would do anything direct to try and remove him. How bad would that look? US army invading their own White House?

If removal happens, I think it would be the secret service that would be the ones to do it. They are beholden to the office, not the man; and all of a sudden there is an intruder in the White House, which is a big deal. He needs to be removed without delay.

And if he does go down this route, and if he does refuse to leave, I guarantee you there will be no dignified end-of-movie resolution to the affair. Just another long, sad, dejected walk out to the car - potentially in cuffs.

...honestly gives me warm fuzzies just thinking about it.

If you'd care to share my blog with your friends, I'd appreciate that! If you'd like to thank me in a fiscal form for entertaining you a little bit, I do have a Patreon right here, but please - no pressure. Thank you for reading, and check my social media to the right to keep in touch.
Posted by John Aridi at 13:04