Fair warning, this one is going to get a little dark as it goes on. It's going to talk about depression and suicide, so consider yourself warned.

Sometimes I get swept up in musical obsessions.

I say sometimes. It happens semi-regularly. Either a song I already knew that has just come back into my life in a big way, like The Pavilion (A Long Way Back) by Coheed & Cambria...

...or something that is totally new to me that just totally sweeps me off my feet, like May I Have This Dance, by Francis & The Lights (this version featuring Chance the Rapper).

Around four weeks ago I did a thingy on the social media wherein I asked for a band name, and I would throw out my favourite song by that band. It was neat, because I liked seeing what everyone else's was - I picked up a couple of bands that I hadn't really thought much about prior to that - and I also gave a serious thought to bands for whom I had only listened to one or two songs.

Well, someone (thanks Gareth) gave me Spanish Love Songs as a band - so I grabbed the only song of theirs that I really knew, which was this one: Losers.

It was two weeks later that I thought, hey - that song I put up. Maybe I should go back and listen to the rest of the album - named Brave Faces Everyone. Why not.

And that's when it happened. 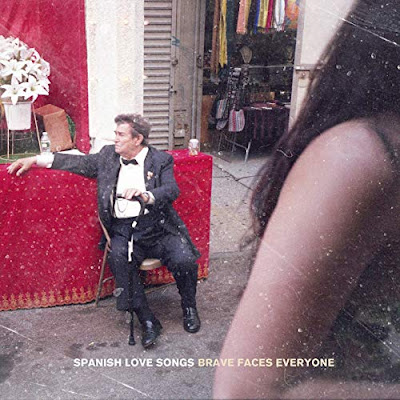 Why would someone who suffers from serious depression - and has done for a long ass time, definitely longer than they have been diagnosed, probably since middle school - want to listen to a lot of songs that are... objectively sad?

The same reason as people ride roller coasters and watch horror movies, of course. Just from a different angle.

When you have this particular mind-chemical malfunction, everything sucks. Like, it absolutely sucks. Sadness is a byproduct, rather than the main effect, but it's an inescapable one at times. You get to feel fucking sad, sometimes without warning, for no apparent reason.

Music can do this, can lead to all different flavours of sadness. Barber's Adagio for Strings, example. Itzhak Perlman's main theme from Schindler's List. This version of Brandi Carlile's Party Of One, which also features Sam Smith. Round Here, by Counting Crows.

Spanish Love Songs bring forth a very specific form of sadness, in me, and that is in no small part due to Dylan Slocum's songwriting finesse and his voice. I know I bang on a lot about singers and their voices, but his voice is perfect.

The very first song on this album - Routine Pain - begins with this:

On any given day, I'm a six of ten

Bed to desk to bar, eyes on the floor

Still apologizing for the way I've been

Each breath more full of shit than the one before

I don't think I can write an entire screed about the instrumentation - it's very good but it isn't anything I can be particularly insightful about. Suffice to say that all of it is a superb accompaniment for the stories that we are being told, and the pleading, entreating, broken voice telling them.

That speaks to me. Right? It being inescapable that the singer feels the song they are singing. That they aren't unaffected, that they can't be, because that song is coming from a part of them. That they are telling you a part of their truth. You are being shown a facet of the person behind the microphone and the lyric sheet.

This, from Beachfront Property:

Said: "it's the end of days

And you're still pissing in the wind"

But figured he'd be a better planner than this

The entire album is filled with gems like this, little moments of song that jump out and grab you. That sink in and make you think.

One song in particular, though, really got its hooks in me.

It's called Optimism (As A Radical Life Choice), and the first time I heard it, I literally had to put down the mini I was painting and stare at my speaker until the song was finished.

Can't even have my coffee without exploiting someone

Or making another millionaire, or billionaire

What would it take to be happy?

I'll probably start with the money

It was as I listened that I realised another point of sad music, and why it is important.

Armageddon on my mind

I'll try to smile all the time

To make amends or keep myself clean

And yes, I'm aware it's fleeting

See, a big part of depression - a big aspect of how it can fuck you up so badly - is because it isolates you. It cuts you off from all the good feeling in the world. It separates you mentally and emotionally from everyone that isn't going through this, convinces you that this is all on you.

It tells you that you are alone.

One thing that music does - even music about being isolated, even music about being alone - is tell you that, at least one other person has felt this, and is feeling it. At least one other human being has stood on the same spot that you currently occupy. A person has been where you are, and has felt what you felt; and as the truth of the words sink in, the numbness cracks.

But I'm done dying on the inside

Now that everything is dying outside

The sky is letting go

Sure, often, it cracks into tears; it fades away to reveal a surface raw and aching and tired, but you are feeling it, you are feeling something, and it's okay to do so. Before the sociological conditioning that we've been at the mercy of our entire lives kicks in and shames us into feeling guilty for daring to have an emotion we can't adequately conceal.

But for those few moments, you actually want to live; and that's when the chorus speaks for you.

Don't take me out back and shoot me

I know my circuits are faulty

Now I've only ever been a kid

Pointing out dead dogs on the road

Take me down in the landslide

Can we weather this high tide?

I'll wear you out waiting for me to implode

Don't take me out back and shoot me

How eloquently a song can advocate for a person's mindstate. How devastatingly it can take that simplest, most basic plea that - when it gets really bad - we aren't even capable of voicing aloud, when every ounce of brain chemistry is yanking the wheel toward the oncoming lane.

We're trying. Please, don't give up on us.

Don't take me out back and shoot me.

It's been a tough few months. It's been a tough half-a-year. We're all suffering. I daresay almost all of us have lost people in one way or another. Times like these lead to thoughts like these, and anything we can do to navigate our way out of the shadows and want to be saved is a bonus.

Look after yourselves and each other.

No pushing my Patreon this week. Instead, consider donating to Papyrus UK. They work in suicide prevention. Thank you. Sorry this was a rough ride, but - sometimes it has to be.