So rather than focus on the fact that the UK government is basically watching the Covid figures surge and doing very little about it, I decided to bring you the rationale for a theory of mine involving Blade Runner and Alien.

Some of you know where this is going. Some of you already believe this theory.

Using evidence from only the cinematic releases of the Alien, Predator and Blade Runner franchises I can prove that they happen within the same universe.

...with only one slight paradoxical problem, which I will address at the end of our feature presentation.

Warning. Everything below this point is a spoiler for the movies involved. I know you have either all seen them already or just don't care, but it's only polite.

Now, you may be saying... John. Come on now. Of course. Of course Alien and Predator happen in the same universe, there's the Alien v Predator movies. Even if they are awful, they still exist, and thus as part of your conditional statement, they count, right? And even if they didn't, here is a whole-ass xenomorph skull, proudly displayed in Predator 2. 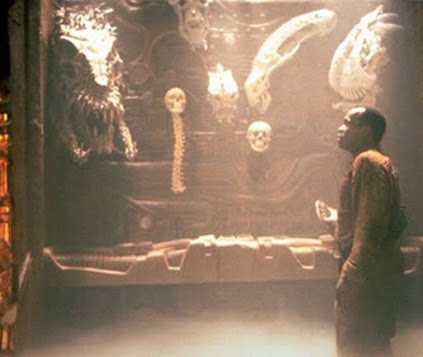 ...well why don't y'all strap in and I'll give you a little razzle dazzle.

This is the personnel file for Captain Dallas, as included on the blu ray release of the Alien Quadrilogy, I believe. Note the corporation in his employment history. 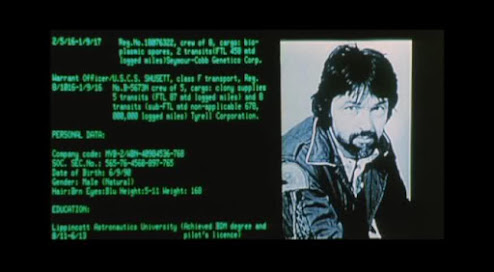 Tyrell, huh? Where have we heard that before?

Now that might not be enough, obviously. "They just threw that together as an easter egg," you might say. "It doesn't count."

Okay well what about using the same software for both the launch system for the Narcissus shuttle and the flight system of the Spinner aerial cars? Alien above, Blade Runner below. 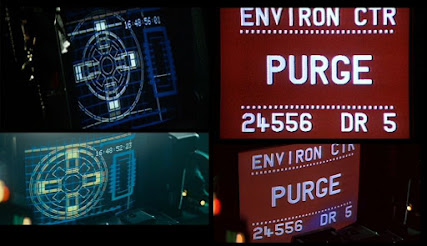 "But John," you wail, up to your neck in mince pies already despite it only being the second week of October. "But John. They just cheekily re-used some footage that they had laying around. That was evidence of Blade Runner's tight budget and production scale, not a nod to a connection to another separate and discrete science fiction movie by the same director."

And I... am willing to probably accept that, honestly. It is perfectly reasonable. It's two small pieces of evidence against a... total... lack of any evidence to the contrary.

Aside from one, which I will get to later.

So how about some... supporting evidence?

Let's talk about the timeline of all movies explicitly written and conceived as part of these individual franchises.

There's a couple of notable absences from this list - the 2010 movie Predators (the date of which is up for debate as it is never strictly given but is presumably set after the Cold War due to one of the individuals present being part of the Russian Army, not the Soviet Army) and the 2018 movie, The Predator... which I will get to later.

So. It starts off simple enough, right?

All the contact that happens before AvP is pretty neatly contained. The Predators (Yautja, as we learn they are called in the books and comics) have clearly had contact with the Xenomorph (or at least the strain we meet in Alien/s) a long time before this - a skull on the wall of their ship in 1997 kept as a trophy.

Humanity's contact with the Predators and the Xenomorphs could prove problematic if it became public knowledge - which it never does, of course, for various reasons. The species classically leave very few survivors, and those survivors are often not exactly the mouthy types - and the events of AvP: Requiem include using an actual tactical nuclear weapon to vaporise a town, the only survivors of the event being taken into custody by the military.

Easy enough. As mentioned - AvP Requiem is ended with a nuclear strike on American soil in Colorado. 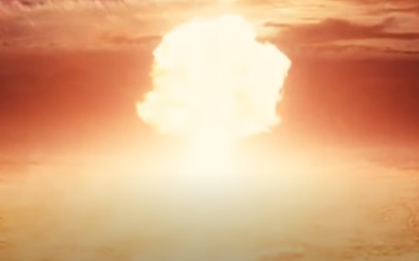 It isn't a huge leap to imagine that such an event would accelerate the climate problems already being faced by North America - and that's just if nothing else happened as a result. The world political situation being as it is, there's no guarantee that the US wouldn't false-flag the nuke as coming from someone else, and use that as justification for further serious military action, possibly involving other nuclear actions, which just snowballs...

...and might, for example, provoke a dirty bomb attack in Las Vegas sometime in the future, for that added Blade Runner 2049 tie-in... 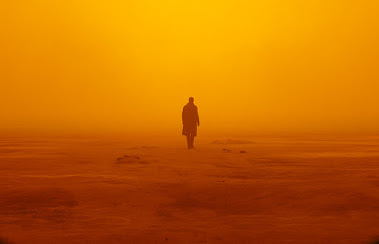 Right. So. Climate crisis. Everything is bad and awful, but don't worry - several massive corporations have the answer. Corporations that have tech far in advance to what we have in this, current, real 2020 - tech sufficient to bring us vat-grown replicants, cybernetics, off-world colonies, faster than light space travel, so on. Now where oh where might they have gotten that tech from?

Perhaps the Predator encountered in 1987? Perhaps further contact with these creatures, as hinted at in Predator 2? Perhaps the fact that both Weyland Corporation and Yutani Corporation both have/had access to and knowledge of this tech? I mean Ms. Yutani was literally given this choice piece of plasma weaponry at the end of AvP Requiem, and stated plainly: "This world isn't ready for this technology." 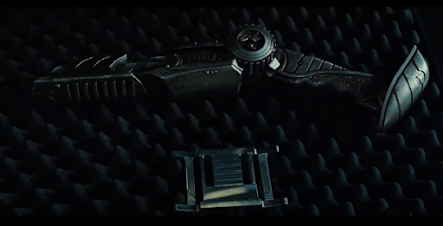 The reply was: "But this isn't for this world, is it?"

We've seen the kind of technological acceleration that comes from even minor-seeming feats. From biplanes in 1910s, to jet planes in 1940s, to space in 1960s. It isn't inconceivable that the technology to achieve everything in Blade Runner didn't originate from a harvest of alien goodies from the 80s, or maybe even before.

So how do we get from the world being so fucked that, in 2049, a girl in Los Angeles has never seen a tree and the biggest corporation going exists and makes its money by copywriting protein grubs... to a rather beautiful vista of an unravaged Scottish mountain in 2089?

Easy. Because what is happening to America isn't happening everywhere. In fact every shot we get of Earth after Blade Runner 2049 is of some cold, bleak, mountainous region; the kind of places that didn't get nuked and have a human population of basically zero. That's the only view we get of Earth after that moment, aside from a brief glimpse of it at the end of Alien Resurrection - and even then, in the cinematic cut, we only get a look at the sky.

In the extended cut of Resurrection, the ending shot before the credits roll is this vista of Paris, with notRipley and Call looking out over it.

Nice shade of orange, where've we seen that before. Arguably this devastation might have been caused by the crash of the USM Auriga into Earth; but it is strongly implied before this happens that the idea of anyone going to earth is highly unpleasant. "What a shithole," Jonner comments.

So... I mean... it COULD happen. Peter Weyland's drive to meet humanity's creators led to the Weyland company - presumably the same company employing Charles Bishop Weyland of AvP - being turned into a full-blown space-travel-and-colonisation effort just on the back of the technologies developed to 1) find the Engineers, 2) keep him alive long enough to meet them and 3) get him to them. 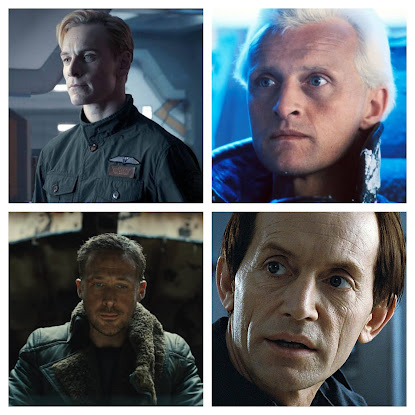 Alien and Blade Runner both deal with these people. The creation of a labour force, and the complexities and problems that comes with that labour force. How people interact with them, what people think of them.

They were made to do the heavy lifting. The arduous work of new lives in space. To help build better worlds. To fight our wars - or specifically the wars between corporations and other corporations (or sometimes other people).

(As a fun aside, the Kurt Russel movie Soldier from 1998 is probably a Blade Runner movie, due to its thematic of "making better soldiers", planetary colonisation, the fact that a Spinner from Blade Runner is actually in the movie, and the fact that Russel's character Todd has the Tannhauser Gate and Shoulder of Orion on his military record - both battles that Roy Batty was present in. He is also listed as having training in the M41a Pulse Rifle.)

Of course, by the time Alien happens, the events of Blade Runner are long past; and Alien itself is set a full hundred years after the events of the short Blade Runner film, "Blackout 2022," which details how the detonation of an EMP in low orbit wiped all electronic records from the earth's computer systems - including the registry of all Replicants that had been made before that point.

People don't trust Replicants that are indistinguishable from humans; they inherently distrust that which is different from them, especially if it can look like them, and especially if it resents being forced into a life of servitude. Niander Wallace produces his new generation of Replicants that are a lot more... how can we put it... easy to control, but he can't make them fast enough to keep up with demand.

At around about the same time, however, Peter Weyland has produced the blueprint of a new way of doing things - David, a synthetic, the first of the new breed. Easy to identify as not being human, especially inside. Very, very easy to treat like a non-human, despite being made to look like us - and after David, not very prone to flaws.

The same cycle repeats, though. By the time Alien Resurrection rolls around, another group of synthetics (or artificial people, as Bishop prefers) - the last and most advanced line, named Autons - goes rogue, after burning their modems and trashing the company that made them. Sound familiar? They just want to live, after all. 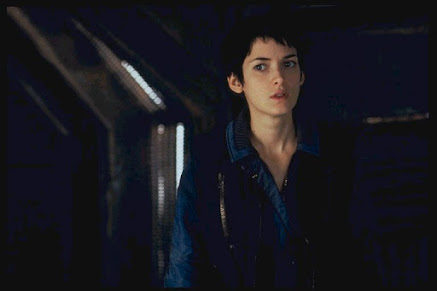 Blade Runner and Alien, at their heart, are stories about the consequences of corporate power. Yes, one of them uses the uprising of a forcibly indentured and fabricated underclass; the other uses an alien entity that the powers that be were probably already aware of, and were happy to sacrifice their employees to gain control over. At the end of the day, though, it's all about controlling individuals, treating them like objects, for purpose of power and profit.

And I always say, that's the future that is the most likely scifi future; a destroyed environment, corporatocracy, humanity living at the whims of shareholders and executives. It's about the dirt under people's nails, and the men in golden towers.

Until we get to The Predator, made in 2018, direct by (and written in part by) Shane Black - who appeared in the original Predator, as Rick Hawkins, the guy that tells the Why Did You Say That Twice joke.

I think it is meant to be contemporary to its release date, which is 2018 (even if nothing in the movie actually says so). One year before Blade Runner; and it's set in America, an America that doesn't appear to be a ruined hellscape hemorrhaging its citizenry into the colonies. I mean Maryland looks positively lovely, nice Autumn day...

I mean - yes, okay, so it backs up a certain angle, there being agencies either corporate or governmental that want the Predator tech and are fully aware that they exist. The tech angle. That works. But... the timeline of extinction - the colonisation - it just.... fucks up the entire thing.

This one movie destroys my entire theory.

I mean, that is, I was presuming it's set in 2018...it could just as easily be set not long after AvP/R. There's a message in the movie that the Yautja are coming back more frequently because the climate of Earth is falling apart so quickly, which it certainly is by the time of Blade Runner, so, perhaps... 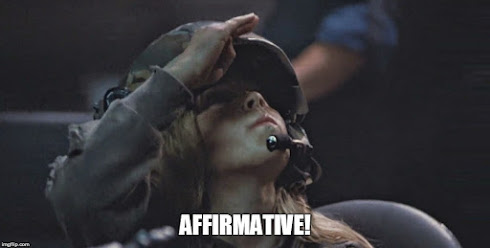 Tune in next time for more nonsense, probably.