A Debt To The Truth

Fair warning. Some of this blog is going to be pretty upsetting. It's about an awful thing that happened, and about a media representation of that awful thing. Continue with a strong constitution.

My mother told me a story recently, about something that happened in April, 1986. I was three, nearly four.

I don't remember where we were living at the time - either Monkton Street or Milligan Road, in Ryde. One morning - one very specific morning - my father went out into the garden, went down to the aviary where he kept all sorts of canaries and budgerigars and such. Dad loved keeping birds - small ones. Nothing like a parrot or a chicken. He had a few finches, too, as I as told.

He got to the aviary and found every single last one of them dead.

They hadn't been killed by another animal - once, a fox or a cat got into the aviary, and I saw the results of that myself. It is obvious when it happens. No, it was as if they had all literally fallen off their perches at the same time. Just literally dropped dead.

Dad was upset, and thoroughly confused. He found out later that day that other people on the same street who kept birds had found the same thing. Every last one of them that was smaller than a chicken. All on the same day.

Nobody really put two and two together until months later - that events from half a world away, nearly 1,400 miles as the crow flies, had reached out and touched us with an invisible hand.

I've always been interested in what happened at Chernobyl. 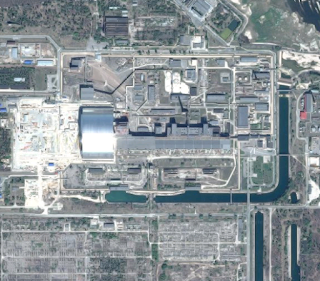 I mean, when I was real young, the Cold War still existed. I was raised in circumstances that tried to prepare me for a potential nuclear strike from the Soviets. I was told what the evacuation plans were, why the Isle of Wight would be affected by a nuclear exchange, what the sirens meant, what our chances were.

For reference, here is what happens when a standard Soviet warhead of the era hits the busy naval base of Portsmouth. I simulated this with the Nukemap, which is a fascinating, awful place to learn about the worst thing that could happen. 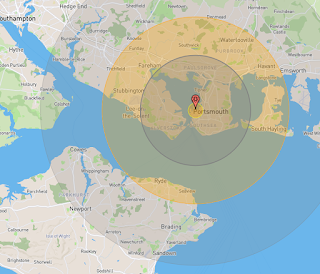 So that is a thing I distinctly remember. I also remember being horribly fascinated with everything relating to nuclear war, radiation, the works. In school we read books like Children Of The Dust by Louise Lawrence, and Z For Zachariah by Robert C. O'Brien, both of which deal with the aftermath of an atomic exchange.

I can't tell you how many hours I have devoted to watching documentaries and media on the topic - Threads, The Day After, When The Wind Blows, all of these got a viewing. That last one, based on the Raymond Briggs comic criticising the lack of nuclear preparedness in the UK, actually came out in the same year as the Chernobyl explosion.

So when I heard that HBO were producing a television show about Chernobyl, initially, my lip curled.

A dramatisation? Seems a bit tacky, given the magnitude of what happened. I mean of course that never stops anyone making a movie about a tragedy, but still. I would have much preferred another documentary, something that drilled down into the topic.

So I slept on it, until it came to light that it had become the highest rated TV show ever on IMDB. Which piqued my interest. I mean, I am bad at TV. This is more a me-problem than a media issue, but a problem it remains. So I clambered out of my own ass to watch it. After all, it's only five episodes, right? Five hours, give or take. I can always duck out of it proves to be unbearable.

It almost did prove to be unbearable, but not in the same way. 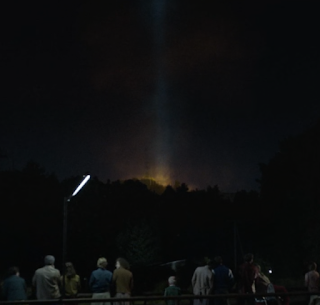 Most people know what happened, though most people don't strictly know why, or the costs and repercussions. This changes that. At least, it should - and because of that, it is at times hard to watch.

It will leave you feeling like you understand why, which is key. And there's the thing. The reasons why could easily be placed upon the head of one man - 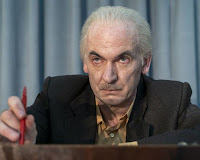 YEAH YOU, YOU RAT-FACED FUCKING DICKHEAD

- but the entire point is that it isn't strictly fault. The responsibility is widespread. No one single action caused the situation. Multiple unrelated events and decisions, that all stacked together to create something truly awful.

I don't think there is a single bad performance in this show - although I feel weird calling it a show, like I am disrespecting it, like putting it in the same category as Friends or something. Not a single bad performance. Stellan Skarsgård is brilliant as always. Emily Watson. Jared Harris. Paul Ritter - PAUL RITTER, you get a special shout out, because by god I love it when you can make me hate someone but still make me want to see them on screen. Everyone in front of and behind every camera.

The accuracy. Multiple different sources who are actually from the region around the time that this happened have stated that they are surprised by how accurate it is, down to the license plates on the vehicles. I think the biggest niggle someone could put their finger on in one place was that the glasses that Ulana and Valery are drinking out of in one shot are actually modern Ikea glasses. This video that my friend Nick is pretty fascinating on that topic, and for sake of transparency, also covers things that the show missed.

The sound engineering. The soundtrack is available on Spotify and numerous other places, and it is haunting. It is perfectly designed to prey on the mind, to remind one of invisible danger. This constant anxiety-inducing reminder that this thing kills, this thing kills in minutes, and this thing continues to be lethal and inimical to human life even today in its new sarcophagus. 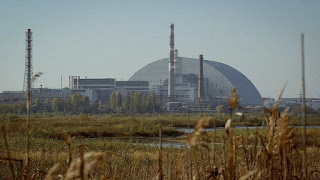 Just as tragic, just as awful, is how the disaster is treated. How it is solved. How the problem is dealt with. That is the outcome, that is the cost. That is the bill that needs paying. The work done in the months following the accident, is a harrowing and brutal study in and of itself.

There is a memorial near Chernobyl fire station, called the Monument to the Chernobyl Liquidators. 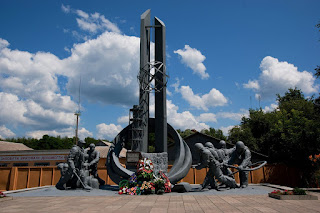 We are still dealing with the consequences today. The location is still lethal. Those working on the containment facility - pictured above, and visible in the very first picture in this blog from above - can only work on the roof of that structure for twelve minutes, before they tick over a year's worth of radiation exposure, and are banned from returning to the site.

This is what is in the guts of the facility. 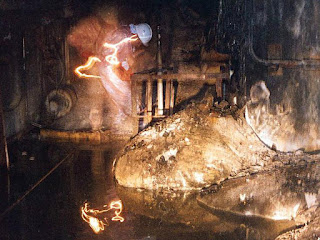 It's called the Elephant's Foot. It is a material known as corium, and it's essentially the melt bit of the word nuclear meltdown. It's lava made of the fuel containment materials.

The man who took the picture is Artur Korneyev, and he is also the man in the picture. The distortion you can see is the radioactivity of the foot itself warping the film and the operation of the camera. The picture was taken in 1996, ten years after disaster.

So for a television show to actually convey to you the scale of this - the absolute jaw-dropping gut-churning awfulness of what happened at 01:23:45 on the 26th of April 1986 (yes, that is the actual time it happened) - is an achievement in and of itself.

It is hard to watch. It is a physical difficulty, to see the harm done to people. To see just what radiation sickness does to a body, at every stage - from initial burns to cellular degradation sufficient to end life. Valery Legasov - chief of the Chernobyl commission - describes how that works to Boris Shcherbina, vice chairman of the Council of Ministers. Watching the soldiers, the work force of 600,000 people drawn in to help combat the spread of radioactive materials, do their work - this, too, is horrific. Episode 4 is not a thing to be approached lightly. A work of devastating horror that sadly proved to be both effective and necessary.

You are left cold, by the end of it. You are left hollow. Desolate. You are left feeling much like that swathe of the Ukraine still probably feels like today. You are left glad that such a thing hasn't happened to you, that you have never had to live through it - that you have never been that close to an apocalyptic event. You feel your guts turn to ice when you think about the people that had to deal with it, how it must have felt to go into that situation without any information. To see a lump of rock on the ground that you don't recognise, to pick it up, and in that instant to have written your own death warrant.

And then, you are left angry. Because you realise how totally preventable it could have all been. It would take precious few changes. The actual mechanical final cause of the explosion - adequately explained in the show but more accurately described in this video by John Green and this video by Scott Manley - was in and of itself a case of budgetary restriction, working on an assumption that the consequences that would make it deadly wouldn't happen. The decisions that led to the test happening the way it did, when it did, was a combination of ambition, stubbornness, ignorance and pride. The mishandling of the disaster in the initial aftermath can further be laid at the feet of the same four sins.

The official casualty count was initially listed as two, by the Soviet Union; this was later updated to 31, and many nations still hold this figure as being the actual figure. The World Health Organisation contends that the figure is closer to 4,000 - though it is claimed that at least 6,000 Liquidators died as a direct result of their work in and around Chernobyl.

NTV - a Russian media network - is reportedly working on its own version of the show, apparently dissatisfied with the blame being placed at the feet of common human failings. Instead, it will be dealing with the conspiracy theory that the power plant was sabotaged by CIA agents, and the heroic KGB's attempts to stop them. NTV is part of Gazprom Media, which is part of Public Joint Stock Company Gazprom - formerly the Soviet Ministry of Gas Industry - which is majority owned by the Russian government.

I don't think we'll ever learn.

If you'd care to share my blog with your friends, I'd appreciate that! If you'd like to thank me in a fiscal form for entertaining you a little bit, I do have a Patreon right here, but please - no pressure. Thank you for reading, and check my social media to the right to keep in touch.
Posted by John Aridi at 14:00