The Best Of The SNES (Mana From Heaven)

So when I was still in school life was pretty simple. It didn't look that way but hey, I know better now. All the stuff I thought was important - well, it was important to me at the time, but in the grand scheme of things, wouldn't add up to much.

I have a lot of fond memories. Very few of them are school related. Perhaps fully half of them involve video games. I was that kind of kid. I personally had a Sega Megadrive, for a time; but as much as I may have defended it, the games that I really enjoyed were on the Super Nintendo.

Like, don't get me wrong. I got untold hours of fun out of the various Sonic games (hey, remember when the WORST one was the FIRST one?), the two Shining Force tactical RPGs, Gunstar Heroes, Rocket Knight and its sequel Sparkster, Soliel, Landstalker - it had a solid roster of titles to keep me busy.

The thing is, there were a specific set of games it didn't have; some of the best games ever made.

Like yeah, Mario Kart was groundbreaking. Super Mario World was exceptional. Super Metroid was one of the coolest games I ever played.

Really, though - mean the RPGs.

On one system, at around about the same time, you had Final Fantasy 6 (or 3), potentially one of the best Final Fantasy games ever made. Chrono Trigger, a triumph for game and narrative design and writing. Legend Of Zelda: A Link To The Past, one of my favourite Zelda games, and maybe still my favourite - I haven't played Breath Of The Wild yet. (I know, bad show, John.) As well as these three titans, you had the third of Square's trio of classic RPGs, and one of the most fondly remembered games of the era: 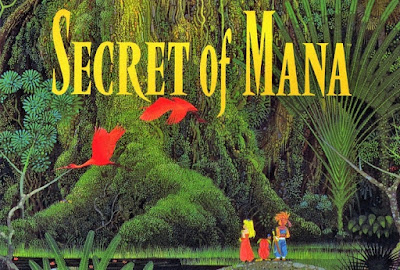 Where my people at.

The game itself is a masterclass. It looks amazing - it pops off the screen, the colour choice and pixel art so very well done, and the addition of the Mode 7 rotating semi-3D map just made it feel like it was above and beyond. The combat was tactical but fast-moving, and rewarded good reflexes as much as forethought and planning.

It was more accessible than Final Fantasy, for a beginner. The ability to get the hell out of the way when the enemy swings for you is a godsend. The plot, likewise, is less twisty. That's a good way to put it, I think. Twisty. Only having three characters to worry about made it seem simpler, too, even if managing all three of them at once was probably harder than - say - Chrono Trigger's system.

I've played it... who knows how many times. Always on a borrowed Super Nintendo, until I discovered what ROMs were... and then, years after it came out, I made a rather startling discovery.

It turned out that Secret of Mana wasn't an original - or at least, not an individual outside of an existing franchise. No, it was part of an ongoing series of games, the first of which had come out two years previously. It was the Seiken Densetsu series, but the first one had been called - get this - Final Fantasy Adventure. It was officially a spin-off of Final Fantasy, coming out the same year as Final Fantasy 4 (aka Final Fantasy 2 in the US, yep, this gets confusing). Seiken Densetsu 1 even includes various staples of the Final Fantasy series, using sprites taken directly from the original Final Fantasy game (Mystic Quest Legend here), and featuring a chocobo that one has to ride at various points.

Here's the thing. Not only was I shocked to discover the existence of a prequel for the game I adored...

I found out it had a sequel.

This sequel was called Seiken Densetsu 3, and I coveted it so desperately that I - at one point - endeavoured to learn Japanese and travel to Japan to buy a copy. Because it didn't exist outside of Japan. This was at the point wherein local copies of Chrono Trigger and Final Fantasy 6 had just absolutely spiked in price because of lack of accessibility, let alone this game, a game that had never left Japanese shores.

One day I discovered it had been codified as a game ROM. So, lacking any other way of playing this game that I desired so badly, I downloaded it on my buddy Matt's computer - and had to use a piece of software to split the ROM across three floppy discs, because this was before the days of affordable CD-writers or portable hard drives. Our entire lives were contained in 1.44 megabyte sized chunks.

I couldn't understand a damn thing because it was literally totally untranslated.

I played it anyway, and I loved it. 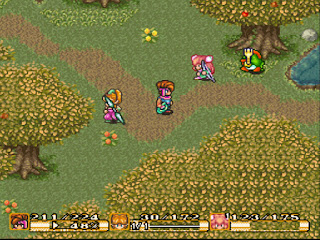 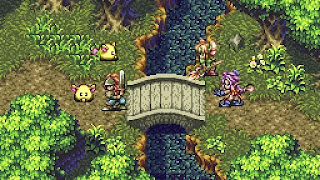 Look at the difference. It's astounding.

With six characters, each selectable as a main character and backup characters, and such an immense graphical overhaul, it was a huge improvement. The sound, too, was tweaked. The combat system was already pretty fantastic so that needed precious little adjustment, but the game included an actual day-night cycle, wherein enemies and NPCs would act differently depending on what time of day it was. There was even a day system, each day corresponding to a type of magic or element, strengthening that element on that day.

Hell, one of your main characters was a werewolf who was deadly at night.

Halfway through the nineties, here was this game, this pinnacle of the art of 2D pixel RPGs. Final Fantasy 7 was out two years later, as the Final Fantasy series took its step into 3D; Ocarina Of Time took the Zelda series the same way a year after that. It isn't a very controversial statement to imply that there wasn't a better 2D RPG released - not perhaps until the comeback of the genre currently occurring.

Access, though; access was the problem. As Super Nintendos got rarer, the games themselves became harder to find. As mentioned the prices had already spiked. I remember hearing at one point that a copy of Final Fantasy 6 was in CB Games on Union Street (callback) for about £80 - and that was in the nineties, given inflation that's almost £150 now.

That was for games that came out over here. Seiken Densetsu 3 was one of the ones that didn't. It became a unicorn - I could pine for Chrono Trigger, could dream of the day when I could by a cartridge and an old SNES to play Mario Kart again, but the Mana sequel was gone.

Throughout the years, though - the old games started coming back. Before people started shutting down the ROM sharing sites that were prolific among folks my age that grew up with 16 bit consoles, Final Fantasy 6 was released on the Playstation in 1999. A Link To The Past came to the Nintendo virtual console in the Wii era. A hard-to-get version of Chrono Trigger came out for the Playstation in 1999, but was circulated more widely for the DS in 2009, and was ported over to many mobile devices and PCs later. A mobile port of Secret Of Mana itself came out in 2009.

Seiken Densetsu 3 remained a unicorn, but spoiled with legal access to all the old RPGs that we had loved so much - and the release of the Mini Super Nintendo containing most of them - eased the swallowing of that bitter pill.

Until earlier this year I heard a rumour that someone had copyrighted the term Collection Of Mana.

Trying not to brick myself in sheer excitement, I casually ignored most of E3 2019 - I kind of hate it as a convention - but kept my ear to the ground for even a whisper of news about the unicorn maybe finally reaching our shores.

It was a week later that I got the news. 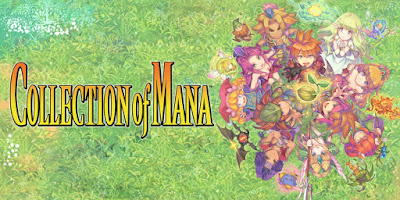 The collection of characters to the right is your three from Secret Of Mana - Randi, Primm and Popoi - and above the seed is Sumo and Fuji from Final Fantasy Adventure...and to the left, the six main characters from Seiken Densetsu 3. Angela the princess, Duran the swordsman, Hawkeye the thief, Riesz the amazon, Kevin the werewolf and Charlotte the priestess.

It happened. The unicorn arrived.

And that's the sad story about why a grown man saw an advert for a Switch game and had to stop himself from crying.

But I mean, if this crystalline moment of childhood happiness was condensed into a software form, and for over 24 years you couldn't have it because of ephermeral reasons - and then all of a sudden, it gets gently placed within your grasp... maybe you'd shed a tear, too.

I mean, it just goes to show, too - you give people access to a thing at a reasonable price, and even if they'd pirated or copied it previously, they will buy it.

After all, Game of Thrones still made money, right?

If you'd care to share my blog with your friends, I'd appreciate that! If you'd like to thank me in a fiscal form for entertaining you a little bit, I do have a Patreon right here, but please - no pressure. Thank you for reading, and check my social media to the right to keep in touch.
Posted by John Aridi at 16:14