So I really enjoyed The Mandalorian, but it isn't my favourite scifi TV series of the past few years.

I mean in terms of actual sheer quality, the best TV show I can remember is actually Chernobyl. It was mindblowing. I will also never let go of the candles I hold for Firefly and MST3K.

The best series I watched this year, though?

Well, that would be The Expanse. 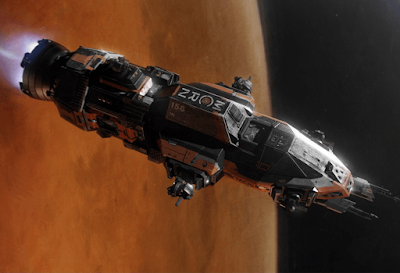 Based on a series of books by James S. A. Corey - 8 books out so far with various supplemental novellas and shorts, the 9th and final book coming out TBA 2020 - the TV series was always going to have a hard time actually capturing the characters that the books so masterfully brought into existence.

It isn't just the characters, of course. The actual scifi elements of it - the ship design, the way the physics works, the way society and politics have arranged themselves in this future that Corey has imagined - masterful. Everything from the cultural boundaries between the Earth folks, the Martians and the Belters, even down to their language and accents and their attitude to life in general. How conflict in space is handled, in the most reasonable and common-sense way I can imagine - almost always conducted at long range with torpedoes and point-defence countermeasures, with occasional need for railguns.

It's the characters I come back for, though. 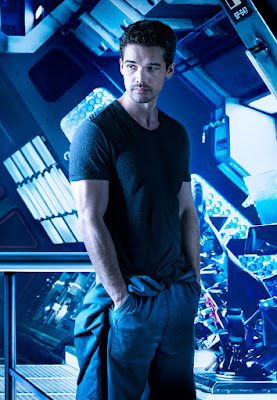 Yes, I know he looks a bit like Jon Snow, and yes, I know a random white guy with facial hair is a boring main character, but hear me out:

In a show about all of the choices having potential costs and consequences and the politics of situations making no-win scenarios increasingly likely, the best arc you can see is a man who is determined to do the right thing, or the best thing, or - hopefully - both.

In a world full of grit and shades-of-grey and meaningful sideways looks, to have a protagonist that you can trust to just do the right thing and tilt at the windmills that need tilting at, even if he thinks he will lose... that's valuable.

(That's why the ship is named the Rocinante, by the way. Well, that and because Amos liked it because he knew someone called that once. It means workhorse.)

But of course a man needs a crew, and that crew needs a technician, and thus you have Naomi Nagata. 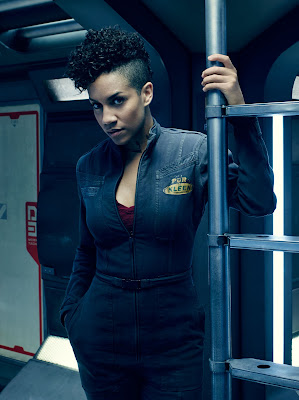 Now Jim is from Earth, the son of a collective family of seven parents; Naomi is from the Belt. She spent her entire life in the void, and doesn't trust planets. "Nothing to hold the sky in, it's weird," she says at least once.

Naomi is brilliant. Literally a genius. Fearless, too, but rarely will she conflate that lack of fear with foolishness. She is Jim's externalised common sense. She knows the systems of the Roci like she knows the back of her hand, better probably, and she's never afraid to put her foot down if necessary.

And boy does she love Jim. And he loves her. And when you watch the series, it will make sense as to why. Suffice to say there's some actual development rather than "because the scriptwriters said so".

Every good crew needs a pilot. You could do a lot worse than Alex Kamal. 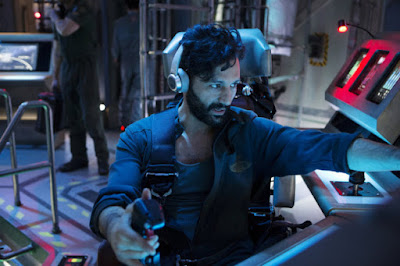 Martian by birth, Alex speaks with an affected Texan drawl, because everyone from that bit of Mars tends to. Yes, it's odd, but it's also now an indelible part of their culture - as is the pride of adapting and overcoming a hostile environment. He's ex-military (so is Jim), and that shows, at times.

He's a lovable guy. Like, you can't help but like Alex. He's a great dude. He's made his mistakes, of course, and he'll be the first to admit it - part of his draw. He's under precious little illusions as to how life works and his place in it. When it comes down to it, though, he's reliable and trustworthy, and the Rocinante couldn't ask for a better pilot.

And then there's this guy. 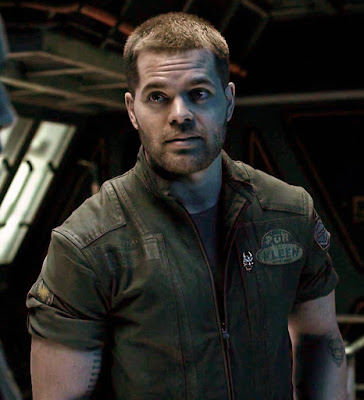 Amos Burton, who puts bits of the ship back together that break, and breaks people that need breaking.

He's a lot of people's favourite. He's from a difficult and somewhat shrouded past, which has left him with an abiding need to protect and look after kids, an amiable smile that sits on his face almost all the time, and a hair-trigger willingness to kill you with his bare hands if you need killed.

His favourite technique appears to be to snap you in half backwards over a table.

Seriously though - Amos is immune to bullshit, incapable of lying, and as long as you're doing the right or the smart thing, you want this man at your back. He's the most dependable man in the galaxy.

He'd so easily be my favourite, were it not for the existence of... 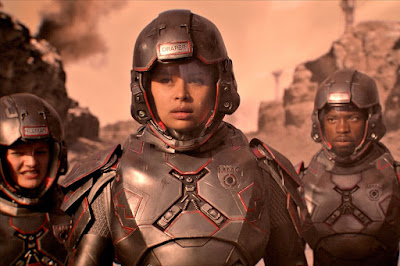 Power armoured Martian marine badass. There is nothing not to love. Her approach to problems is direct but she is far from stupid. She takes pride in who she is and what she does, and she does it better than anyone else. I love Bobbie.

Like yeah, the show has a lot of asses that need kicked, and Bobbie is capable of doling out most of those. Her and Amos together are a fearsome combination.

And that's just... like, five of the characters. Perhaps the main five.

I haven't even talked about Miller, the detective who looks how I feel, who wears a hat in an orbital habitat to "keep the rain off". Chrisjen Avasarala, the politician, who is definitely not a protagonist but you definitely kind of want her to win anyway. Camina Drummer and Klaes Ashford. Shed. Murtry. Praxideke Meng. The Mao family. Elvi Okoye. There's just so much good character here that you love seeing them being on the screen, let alone reading them on the page.

I am evangelical about this show. Perhaps that is why I like it more. Like, The Mandalorian is good, but it doesn't need me to talk about it. It doesn't have hidden depths, it is what you think it is. The Expanse has so much more to it than any trailer can prepare you for.

Make it your 2020 New Year Resolution.

Watch it, read it, catch the last book.

You will thank me later.

If you'd care to share my blog with your friends, I'd appreciate that! If you'd like to thank me in a fiscal form for entertaining you a little bit, I do have a Patreon right here, but please - no pressure. Thank you for reading, and check my social media to the right to keep in touch.
Posted by John Aridi at 15:31