And The Ninja Is A Theoretical Physicist

I can't remember how long ago it was that someone introduced me to Ninja Sex Party, but it was a fairly long time ago. I had just started playing my favourite Pathfinder character ever so I think, about, nine years ago.

There's this band called Ninja Sex Party, right. And there's two people in the band - and one of them is called Ninja Brian, and he's a theoretical physicist, and the other guy is called Danny Sexbang, and this is one of their songs, it's called Dinosaur Laser Fight.

Okay, I say, and watch and listen.

I must learn more.

I do learn more. 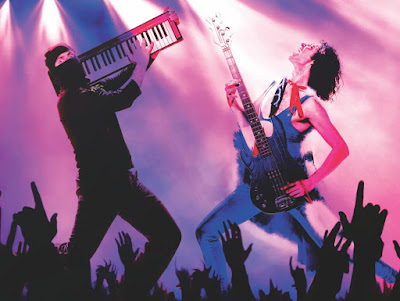 Okay so their style is kind of poppy sexy funny haha whatever - but as I mentioned before. There's some genuine talent in here. Like Danny Sexbang (right, obviously) isn't just some guy laughing at his inability to last more than 180 seconds in sexual intimacy. He's an accomplished vocalist. He has a great voice, you KNOW I like great voices.

I only find out later that he's Daniel Avidan, of Game Grumps. But that's another story.

More and more, as their career as musicians progress, the music side of things comes to the fore. They fall in with a band named Tupperware Remix Party, who are futuristic superheroes from the planet funk (obviously). TWRP became NSP's backing band in 2015. They release cover albums - three of them so far - and those cover albums contain a wide selection of genuinely good stuff. Like, here's the NSP cover of Photograph by Def Leppard.

They don't work in isolation, either - Danny does vocal spots in a bunch of other songs. Ninja Sex Party plus Arin Hanson (internet shouter and animator) form a band called Starbomb that do a lot of video game parody stuff; Arin appeared as a vocalist on a TWRP track which also featured The Protomen (ALSO awesome), called Phantom Racer.


Danny gave vocals to this song by a band called Night Runner, called Magnum Bullets, which I have listened to once a day since this video came out.


Which...well where is this all leading me?

To my favourite Ninja Sex Party song, which is called, First Date.


Just the sheer improvement between the two - the sheer development and evolution of the sound - you can't ignore it. Dinosaur Laser Fight is a fun bouncy rock-pop song about dinosaurs. First Date sounds like it could actually be a full-blown 80s style single release.

So the content of the song is still fun and jokey but it's less about penis jokes and the strange creature that stalks the band and tries to kill them. It's not the lyrics that matter so much. It's the melody, it's the instrumentation. It soars. It uplifts. It feels like driving with the top down. It feels like being Young And Alive, just like the song says.

It's great. It's feel-good. Danny gets to stretch his legs, vocally...

...and there is one part that I absolutely adore, that is probably not worth getting as worked up over as I do. But you all know I love a key change right?

...key changes UP to the natural escalation of...


"Let's kill five guys tonight! I'll take you back to your place and we'll craft a perfect alibi!"

And you don't get just how happy that makes me, how much that made me laugh the first time I heard it.

I have an entire playlist of songs on Spotify that makes me smile like an idiot, here it is.

This is one of them.

Just an excuse for me to prattle about some music I like, because, why not?

I know that right now everyone is getting hit pretty hard by the lockdown, and the pandemic causing it. We're all hurting. Look after each other.

If you'd care to share my blog with your friends, I'd appreciate that! If you'd like to thank me in a fiscal form for entertaining you a little bit, I do have a Patreon right here, but please - no pressure. Thank you for reading, and check my social media to the right to keep in touch.
Posted by John Aridi at 15:42