The Ones That Make It

A lot of you may be familiar with this particular graphic, but if you aren't, let me walk you through it. 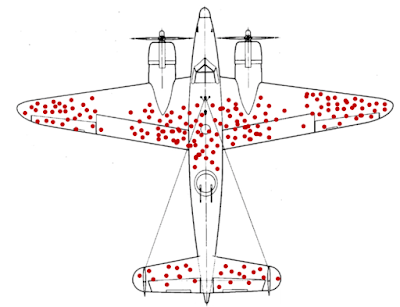 World War II was - as with many other wars - fought by numbers. Statistical analysis was very important in the planning phases of most operations over a specific scale, and in the provision of weaponry and equipment. It was a war won as much by the production line and the numbers game there, as it was the actual combat.

As strategic bombing became more and more important, and the wave method of bombing in particular, many studies were done into this particularly high-attrition method of conducting warfare.

The graphic above is based on hypothetical data, and is the bullet spread observed on returning bombers.

It was theorised by those who made the decisions that - if that is where the bullets are hitting the plane, then we up-armour those bits of the plane, yes? I mean that's a good conclusion, given the data available. 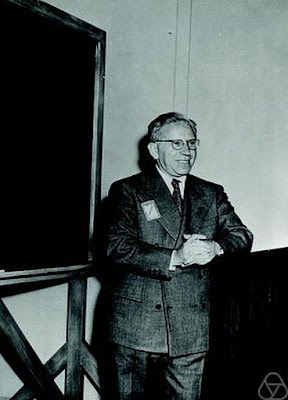 Wald was from Cluj in Transylvania - that's Austria-Hungary, now Romania to you. He was a mathematical genius who was prevented from gaining any position in a university due to Austria's institutional antisemitism - and when Hitler's Germany came calling in 1938 he and his family fled to America.

Wald took a look at the data and stated that the proposed action was bullshit, and when asked why, he pointed out the data that had been acquired.

Where were the hits to the cockpit? The engines? The leading edges of the wings? How is it possible that the (at the time) highly trained and competent Luftwaffe pilots weren't hitting those? The answer is simple, and if you haven't got it by this point, you'll want to kick yourself:

The data was taken only from the planes that made it back.

In an alternate timeline, Wald never made it out of Austria - either he didn't make it out before the Nazis showed up or he was refused entry into the US for whatever stupid reason. So nobody noticed this particular point, planes were built differently, they got shot down more, and the war slowly, steadily shifted toward a potentially different result.

That is an example of what we call Survivorship Bias.

If ten people go into a situation, they all try the same method to get out, and only one of them makes it - to that person, this method worked. Because this is the person that came back to tell the story of how their method did the job and saved their life in the situation in question.

When people talk about how something was tough, but they made it through okay - well, great, but how many people made it with them? When someone brings up the Blitz Spirit, and carrying on with a stiff upper lip - well the Blitz Spirit didn't work out for the 40,000 people that died and the hundreds of thousands that lost their homes and livelihoods in London alone. Just shutting up and putting up gets people killed, in a lot of situations. Just those that aren't affected tend to shrug their shoulders and say: well, not ME.

If you take a thousand people, at birth; and you provide one of those thousand people with the privileges and good fortunes of a stable part of a country, supportive parents with a significant income that will let them take risks and push them into better academic and professional circles; then they will almost certainly, at some point, talk at length about how they started with nothing and how with some hard work and some graft, ANYONE could do it.

There's a statistic that claims that as you age, you become more conservative. There's another statistic that claims that people who own horses live longer than people who don't. Both of these are probably true, but miss out on two key points: that the greater your income or wealth, the more conservative you lean - and the greater your income, the better healthcare you can afford, leading directly to an extended lifespan.

Whenever presented with statistics, always query where they are from, how they were gathered, what might have been missed. Query what they are being used to prove and how that proof could be reinforced by - for example - asking a smaller sample size, or asking customers of a specific site or store. You might not want to believe a publication if they claim that 80% of people on earth believe the Earth is flat, if the magazine is Flat Earth Monthly, and they asked 200 of their own readers.

Oh yeah, and - if the xenophobes and the antisemites had their way - there'd have been a lot more downed bombers.

If you'd care to share my blog with your friends, I'd appreciate that! If you'd like to thank me in a fiscal form for entertaining you a little bit, I do have a Patreon right here, but please - no pressure. Thank you for reading, and check my social media to the right to keep in touch.
Posted by John Aridi at 14:07