Do you watch movies or films?

This might seem like a semantic question. It sort of is, but not quite in the way it looks.

So you know when you watch something and it is pure popcorn but you love it anyway? Like, so much of it is cheese and fun and action scenes for no reason other than action? Ridiculous martial arts films, stuff like Top Gun or Rocky (specifically one of the sequels, the first one is brilliance). We know that logically there's no greater point to this, nothing done to push the capabilities of cinematic excellence, but - I mean, who doesn't like watching giant robots beating up giant monsters? Pacific Rim isn't an Oscar candidate and it's not going to win writing awards but it isn't FOR that - it's for showing you something that you just enjoy watching.

Then there's the stuff we watch that does have far more depth and greatness to it. Classics. Films with intelligence, superior writing and cinematography, that challenge us with their themes and their messages. Blade Runner, Citizen Kane, that infinitely cool short you saw on Channel 4 the other night - they're stuff that you watch when you want to engage yourself.

And there you have it, right? Blade Runner is a film - Pacific Rim is a movie.

The line does break down in the middle obviously. There's some big dumb martial arts movies that are actually heavily artistic, showing technical and thematic excellence at every turn. There's some films that aim for brilliance and fall very short, on both sides of the equation - but it's far easier to make a shoddy horror movie that is entertaining to watch than it is to make a shoddy examination of the nature of time and self in the way that Donnie Darko does.

I do not often want to watch something that is twee or cute or whatever. That's rarely a thing I am into. That doesn't make the film bad, and I have to admit that. There's a difference between "I dislike this" and "This is terrible". I like some objectively terrible films. Plan Nine From Outer Space, anyone?

Where am I going with this? Not sure, really. Only in the general direction of loving both ends of the scale, from glossy sci-fi shooter, to fifteen-minute duologue about working class people in the eighties. It just depends what mood I am in.

I'm just...never in the mood for Bayformers.
Posted by John Aridi at 21:27 No comments:

This time last year, I wouldn't have believed anyone if they had explained in reasonable terms what the social and political landscape of now would look like.

Our government on the run, radio silence as they continue to push through harmful legislation, picking apart the NHS before something happens to end their mandate - a rebellion, another election, a referendum on leaving the EU.

The calls for a second referendum are loud, too. I agree with them. There's a lot of facts in the open, now. A lot of the lies have been kicked into the long grass where they belong, leaving only the economic certainties that are already coming true.

You know what I wouldn't have predicted happening?

The Nazi march in Charlottesville.

I'm not so naive as to assume there aren't neonazis in the United States, or here, or in most countries. There's a lot of racism drifting about, often kicked up as a way to consolidate or fabricate political support. As a general populace becomes less bigoted and less prone to hatred, there will always be the echelons of that society that kick back and hate more.

Back in August 2016 though - I didn't think the orange wonder would win the presidentail election, and usher in his little cadre of white supremacists and general scumbags. Nor did I think that he'd appeal in such a base way to violence against those who oppose him, or this whole Alt Right thing, which as best I can tell is the "moderate Right" telling the world: yeah, we may be ultracapitalists who hate women having rights, but at least we're not antisemites and racists.

And I didn't think I would see a bunch of people claiming against all evidence that they are the superior gene pool, marching through a town, holding tiki torches and loudly proclaiming that Jews wouldn't replace them.

Even just...paying attention to the whole thing...watching how people treat each other, and how those who stand up against the Nazis get painted with a very ugly brush...

It's enough to exhaust you.

I know that is a big reason why some people just avoid politics and social issues altogether. I also know that's a privilege. I can't pretend that the current economic or political situation won't affect my life, and almost always in negative ways. I don't earn enough money to just wave off news that workers rights are being tested or that the economy is slowing down at record rates. Likewise my friends and loved ones who are any kind of minority - how can any of my people of colour ignore the fact that Herr Drumpf only gave vague lip service to opposing these Nazi assholes? Or ignore that our own government is still okay with this Nazi sympathiser coming to visit sometime in the near future?

Nonetheless. Paying attention, seeing the ugliness that human beings are capable of enacting on each other - it is draining, and I won't deny it.

On Friday I felt a deep and keen sympathy with this tear-jerking scene from The Green Mile.

Because it would be so easy...so easy for these things to not happen. Surely, it takes more effort to be an evil fuck than it does to just not. When you get home from work at the end of the day, from giving up your daylight hours to have enough paper just to make it to tomorrow with shelter and food - do you have the time or the energy to actively try and make the lives of innocent people worse?

Maybe it's just the chronic health conditions I carry around with me that makes me feel that fatigue. Maybe most people get home at the end of the day and they DO have that energy. Maybe it's just the mindset I lack - I don't feel terribly accomplished or refreshed when I get myself furious at poor people or sick people or old people or disabled people or people of colour or LGBTQA folx.

Because here's the thing: you can choose to not be a Nazi. You might have a deep and abiding resentment inside of you, but you're the one that chooses to walk out to a march, to buy a tiki torch and a red MAGA baseball cap and stupid cream chino pants, to chant the same things as the other Nazi scumbags. The people you loudly and angrily hate can't stop being what they are. YOU can. You're the one putting in the effort.

And then being really surprised when you get fired, or lose social privileges, which is weird. I mean, you'd expect some flashback from being a Nazi, right? Even peaceful unarmed protesters get the shit beat out of them by riot cops, and all you got was escorted around by the boys in blue. Surely your workplace suddenly remembering that they shouldn't employ members of hate groups is a thing you expected?

After all, you took the effort to not go to your little private social event. You took the effort to stand around a statue, wearing clothes imported from other countries, holding a torch made popular by an entirely different culture, and loudly brag about your supremacy, with the symbols of more than one failed government.

When I take the time to call out bullshit, I expect people to remember that and treat me as such.

Even if it would be easier if I didn't.

So yes, I am tired. I am tired of these twerps thinking it's unfair that they suffer repercussions for being racist shitlords. I am tired of people who act against these scumbags being called out and torn down because activism makes people uncomfortable.

But they aren't going to stop.

So we can't either. 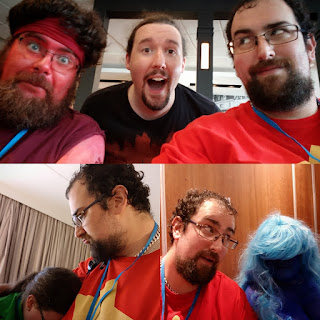 Today has been agonising. Lots of joint pain and breathing difficulties. It's been hot, sticky, and rainy. Nothing is great, and my body is reminding me of that.

You know what? Usually I would stop, take pause, take a few days to myself.

And if I need to arrive like a Zapain zombie, I will.

Because Nine Worlds is home.

Expect a far bigger blog on my return. LOVE YOU
Posted by John Aridi at 22:53 No comments: