Take a look at this painting. 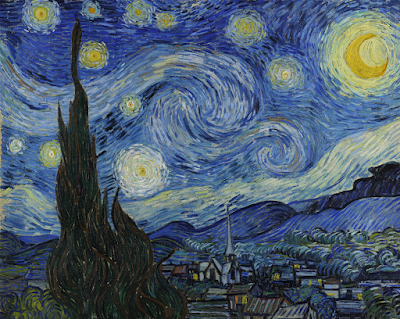 Vincent Van Gogh painted it in 1889. It's a view from out of his window at the asylum in Saint-Rémy-de-Provence in the south of France - somewhere between Montpelier and Marseilles.

The thing is - it's also kind of not the same view. The church is different, for one thing; in fact the entire town is plucked from the void. It does also bear mention that - at risk of sounding obvious - the night sky just doesn't tend to look like that.

What Vincent was painting, therefore, wasn't just what he was seeing. It was what he was thinking.

We are all familiar with Van Gogh's ear, obviously. The exact circumstances that led to him severing it - either in part or as a whole isn't known - are less well known. It seems to have been the end result of his artistic relationship with Paul Gauguin, leading to an acute mental breakdown. It may sound extreme but - to finally be painting with one of your most respected peers, who ends up treating you like some kind of insolent child... we have all heard the advice of never meeting your heroes.

What followed was months of treatment, and to-and-fro between the yellow house he had shared with Gauguin and the hospital. Vincent suffered from hallucinations, and was known locally as "the red-headed madman" - the citizens of the town had the house shut, and he was forced to stay in hospital.

It was by his own admission that he entered the Saint Paul asylum in May 1889.

Imagine how it must feel to look at the world through eyes coloured by those experiences. To not only be unable to trust one's own mind and senses, but to be ostracised for it. Perhaps, if there had been sufficient support and treatment, his relationship with Gauguin wouldn't have deteriorated to the point of self-mutilation. The understanding of the working of the human mind is incomplete today, let alone 130 years ago; and our treatment of the mentally ill today hasn't necessarily improved very much, even if the science has.

So when we talk about what Vincent was thinking rather than what he was seeing, this is what we mean. All his paintings from this period of his life are distinct - put them together with his other works and even the absolutely uninitiated (like me) could pick them out as being different. The world through the eyes of a man at war with his own mind. Which makes the precision of the turbulence in the air all the more impressive and striking - the painting can be used as a model for fluid dynamics, and nobody is quite sure how.

The eye is drawn all around the piece, too. It never settles. You can stare at a specific detail, but always you are drawn on - across the town, up the cypress, up into the night sky, to the moon,, down to the brightness of Venus (which was actually in the sky at the time), across the sweep of wind and light, and back down to the town.

It doesn't show us what it feels like to be in that state of mind - how frightening, how awful it must be - but something about it echoes that deepest recess inside of us, that shadow within our skull that threatens to obliterate reason and agency. Something about the sweep of the strokes in the sky, the town nestled beneath the light of the moon, the looming cypress, the luminescence of the stars that seems to bleed liquid-like into the porous sky around them.

It's like what is there, but shifted slightly off-kilter.

I don't know if there is any comfort to be drawn from it - that doesn't seem to be what the painting is for - but I, at least, value the piece as a means of stepping outside one's own worldview. A way to see the sky at night as a totally different thing to that which your eyes show you. To demonstrate that not everything runs parallel to your worldview.

I'll see this painting in the canvas, one day. I'll stand in front of it, and I'll see how it looks from that different angle.