We Give And We Give

The other day a very close friend of mine in America asked me what the Pearly Kings and Queens were.

Now, anyone not from the UK - or maybe even from London - would be forgiven for not knowing, and then forgiven for further confusion when you google it and find pictures like this: 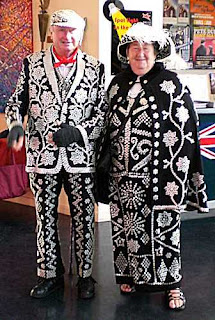 I'll spare you the significant gritty detail - tl;dr, back in the late 1800s, a working-class street sweeper named Henry Croft started to cover his suit with mother-of-pearl buttons, in order to earn money for charity. He raised a significant amount, and the eye-catching idea started to spread. Before the outbreak of the first world war, literally every borough of London had their own Pearly King and Queen.

They were all joined by two common threads: they were almost universally working class, and they all raised money for local charities.

According to the Charities Aid Foundation, citizens in the UK gave a total of almost £9.7 billion to charities in 2016, and 41% of the citizens of the UK gave.

That's quite a number. Even if you divided that amount amongst everyone in the UK, every single one of our 45 million or so adults, that's about £216 each over the course of a year - £18 a month or thereabouts.

I know there are other ways to help charity. Very aware of the fact. Volunteering for example - 17% of the UK volunteers their time in some way.

What I am thinking, though - is just how many charities there actually are, and just how much regulation of them exists. And each one of these charities has to organise, has to go fundraising, has to spend time and resources (including donated money, let's be adults about this) making sure they can remain in operation. That is before they even get the funds and help to the places they are raising the funds for. Never, ever underestimate the complexity and cost of logistics.

...what if, if we had a government that we could actually trust not to ruin it... (yes, I know that makes it actually a nonissue)

...all charity giving and distribution was handled centrally - and a portion of it was raised by taxes?

I know I know I said the T word and everyone hates the T word, but hear me out, here.

A tax of say £20 a month sounds like a lot to a lot of the people reading this. Sounds like an amount to me, too. But then, that's because most of my friends are below the average earnings line. Back in 2015 that average was about £27,500, and spoilers - despite corporate and high-end income still climbing, it hasn't actually gone up very much.

So if we were to add an element of income-based taxation, rather than a flat figure, it would be a lot more progressive. Obviously. I mean if someone is paying at the 40% tax band then £20 is literally a drop in the ocean each month. Without getting into how I feel about upper-end taxation (and that would be a very long discussion, I promise) it would be relatively easy and also not terribly harmful to raise more than the current amount given to charity by taxation that would, in a year, be effectively unnoticed.

Then you realise that you aren't having to pay for the organisation of however many thousands of different charitable organisations there are. Each one doesn't have to spend anything on advertising or people on the street asking for handouts or anything of the like. I mean sure, for big causes you could still run the entertainment specials and such. You just don't need to shell out anywhere near as much on the logistics of the operation.

And seeing as we would have funded a significant number of charities, then people's lives would be made better, and more accessibility needs would have been met. More people would be capable of living better lives, which should be a reward in and of itself, but seeing as that is often not sufficient - guess what, they are now spending money and paying taxes too.

That is assuming we can'd find the money to fund those charities by making certain spending decisions with our current budget. I hesitate to bring up that other big T word, but... we're spending an awful lot of money on Trident for no apparent reason.

I know it isn't an ideal solution. It would require us to be able to trust those making those decisions, and be able to hold them accountable if they mess it up or act in their own self-interest. Two things which are, sadly, fairly unlikely.