Greetings folks, and welcome to the last blog of the year - a Reader's Request, no less! So without delay, I will dive into the prompts given me by social media, and see what we find!

Hardest scene you've ever written and why - This one prompted a "THIS!" from the peanut gallery, so a popular choice, apparently. This is... hard to answer, but, I think it is a scene from a NaNo entry called Individuation. Something I'd like to revisit one day. Anyway. The main character ends up in hospital over something self-inflicted, and I wrote that whole bit from experience. That was difficult to put down on the page.

Most useless piece of tat you have ever seen marketed? (politicians don't count) - The company Supreme makes a lot of ridiculous overpriced bollocks, I don't know what they do aside from that, but here's a fucking BRICK with their logo on it. 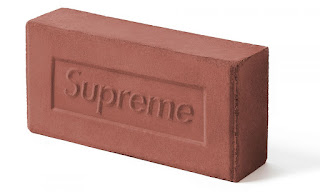 Favourite MST3K episode and robot - In the not too distant future! My favourite episode is Manos: The Hands Of Fate, season 4, episode 24. It's just... such a bad film. So very, very bad. And my favourite robot is Crow T Robot, if only because his brand of sarcasm is very much my kind of brand.

Favourite and least favourite mash up of an item. - This came with a prompt... 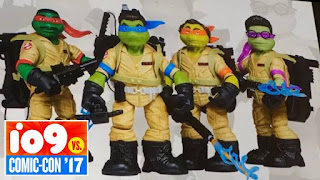 So there are so many mediocre mashups - like, websites full of shirts that (in various levels of wittiness). I think the best mashup I've seen - like, a literal melding of two separate individual properties - is the combination of Batman and Wolverine in the short-lived Marvel-DC mash-up. Darkclaw - the ULTIMATE edgelord. My least favourite mashup is the New Testament.

Favourite adversary you've used in writing or gaming - That's a hard, hard choice. Very hard. Though I think that... if I had to pick one, it would be Emir. The covert-terror AI that got loose in Eclipse Phase, and caused a civil war to break out amongst other things. Oh, and he killed millions by severing the space elevator anchored to Mons Olympus.

Favourite and/or most interesting Tradition - One of my own favourite traditions of a thing that only I do is to always watch The Crow on Devil's Night (day before Halloween for the uninitiated). In terms of other people's traditions? I like this motherfucker. This is Mari Lwyd, it's a bone horse that gets carted through various different towns and villages in Wales. 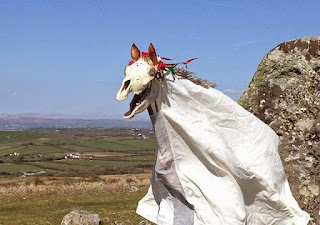 Why dune is the only film you ever need to see (David lynch version) - This is a falsehood. It is, however, a film you NEED to see if you have not. Because it is ABSOLUTELY BONKERS.

Most memorable arcade machine - This one got a "THAT!" from the peanut gallery so we're gonna go with it. There's two memorable ones. One because I absolutely LOVED it, and one because it is absolutely infamous. The one I loved was the Aliens arcade game. If only because I was obsessed with Aliens when I first discovered it. The memorable one? There's a very, very prevalent glitched Streetfighter 2 board wherein the characters have mixed-up specials and Chun Li does fireballs when you do her kicks. It's absolutely mad. And I've found three of the same machines in three different arcades!

Batshit craziest folk story you ever heard? - The first world, in Aztec lore, displeased Tezpatlipoca the Smoking Mirror - god of ancestral memory, time, and change through conflict. So he had everyone on earth be eaten by jaguars. No flood, no fire, no cascade of angels. No. EVERYONE gets eaten by a jaguar. Fuck you people.

Difference between our generation and our parents and why it leads to so much angst and strife? - Economics and war. The march of capital upwards and upwards, away from us. My mother remembers rationing when she was a child - back when we as a country had built a million council houses to house poor people after massive swathes of the country had been bombed flat. Now our money is worth less and employers are less willing to hire us. And nobody wants to admit that they've been given a better ride than anyone else. Not that they chose to.

Favorite character you've ever written. - Difficult choice. But I think, maybe... Captain Forenza Drake from Bridge. I like her a lot. Big and bolshy and grinning like a cocky dickhead the entire time. She's brilliant.

Follow up, your favorite character in popular media. - You need me to pick one? Gawd. That's hard. My favourite characters read like the lineup from a Smash game (except not all owned by the same franchise). But like. I mean. Let's just go with Lt. Ellen Ripley and be done with it.

Comments and thoughts on the resurgence of Nationalism, and how we can (as a world) move past it. - Nationalism is being tapped again, as it always gets tapped, to fend off changes that the people want and demand. The people that want things to be the way they were can go to Nationalism for that, and they will. We as a world have to move past it by rejecting it at every single turn, by not giving it the space to grow, and by being active in their community and their politics. We need to learn, we need to study, we need to believe we can be better, and then we need to be better.

There's a lot of parallels between our current world and various dystopia such as Altered Carbon, Shadowrun etc. Do you think we're doomed to a dystopian future, or do you hold out hope that we can possibly reach something more utopian like Earth in Star Trek: TNG? - I think that in order to reach a future that isn't Blade Runner, we're going to have to rip down the entire edifice and start again from scratch. And that simply isn't likely.

When (if at all) do you think the current Age of Superhero media will go the way of the Westerns? - If you mean, when it will go fallow, and then return in a more gritty shape? I'm not honestly sure. I mean Marvel are still making stuff like Paint Your Wagon, whereas DC have blown out of any semblance of it and skipped ahead to 3:10 To Yuma. So I am honestly not sure. It's a hard market to pattern.

Favourite after credit scene. - The bloopers from Rumble In The Bronx.

Current favorite meme. - While I like Bongocat a lot, my current favourite is Surprised Pikachu. 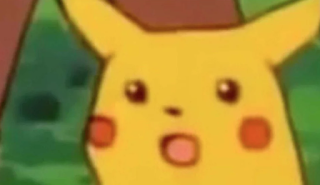 Your view on the current state of video games - Kind of all over the place. I don't know enough about the innards of the industry to comment properly but... there's been some great stuff released recently, and some of it has even been triple-A. But the same shit is being trotted out, as usual. Not a lot of forward movement.

Honorary mention goes to Tim Curry for the Lord of Darkness in Legend. He's not the Devil but he's awesome.

Anti-vaxxers, flat-earthers , conspiracy theorists .. discuss ?? - Oh god. There's a lot to unpack there. A loooot to discuss. I think we'd be a lot happier if, instead, we vaccinated our kids, accepted the earth is round, and started learning about how things actually are rather than chasing ghosts. Every conspiracy theory has a reality to it that is 1) obvious if you look 2) out in the open and 3) much more mundane and terrible than the theory itself. Bush Did 9/11? It's probably scarier to imagine that it was achieved by a bunch of determined people under the not-so-watchful eye of local security services.

What animal breeding style would you like to see swapped with another? E.G. female seals laying hundreds of eggs, queen alien style. - I'd like to see sea turtles use the breeding style of sharks. So they don't have to make their babies run down the beach. Instead they get to fight each other before birth. But they don't die cos they aren't sharks.

If you could update the human body with a new patch, but only concerned with one system, like digestion or whatever - The BRAIN. The brain. By god. The brain. Just be better, dammit, BE BETTER.

Who would you like to put on a new £4.50 coin? - Clement Attlee. He preceded Churchill (whose genocidal mug is on the £5).

What do you do if your friends don't dance? - Their opinion doesn't matter, I can dance if I want to.

What if God was a duck this whole time? - It would explain an awful lot.

Which ninja turtle would make the best emperor of Edo Japan. Then which Power Ranger. Then which of them would win in a duel. - Leonardo would make the best emperor because he is literally the leader. And he's good at it. At least, most of the time. I don't know if ANY Power Rangers would make a good emperor? But let's go with Billy Cranston, because he's smart as fuck, and not just mechanically speaking. Which means that I think Leonardo wins the duel. Cos he's a fucking ninja.

Meghan Markle! - I love her. She's great! It's unfortunate that this country has so many assholes in it, and that she becomes a target for them. It's an embarrassment for this nation.

If 500 years ago, Britain was a Matriachy, would things be the same? - I am not entirely sure, however - the monarch 500 years ago was Henry VIII. So like if he wasn't around, and there was a queen instead, then we wouldn't have had the whole reformation thing... god, that would have changed things a bit.

(Chris asked me who my favourite US president is but he didn't post a question for me to copy, boo) - I dunno but I like Lyndon B Johnson a lot. If we're talking about ACTUAL US Presidents. My favourite fictional US president is Morgan Freeman from Deep Impact.