It can be pretty hard to ascertain what is actually happening in the world on any given day. There's a reason why the news and social media alike both seem to be very overwhelming - frankly, they are designed that way. Got to keep the visibility up, or people will forget about you, right?

So it can all feel a little like this: 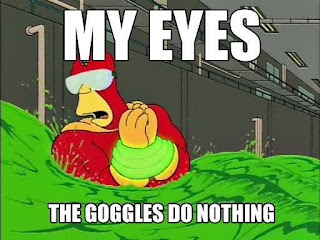 A certain amount of savvy is required to navigate the thousand howling voices all crying for your attention. Today I endeavour to pass onto you some of my advice, in regard to doing just that.

Things to look out for:

The headline is not the whole story.

Headlines are basically like WatchMojo videos - clickbait. They can be deliberately misleading, and will often present part of the story without context if it would prove to be more provocative or interesting. That is their entire point. So make sure that, when you see the headline, you don't immediately take that to be what is actually happening.

Have a little dig into it. Click through and read the article, if the news source is one of those that you don't object to giving clicks to - see The Daily Mail for an example of a news source that doesn't deserve your clicks. Maybe search the event in question in your search engine of choice, check out some alternative views. Which takes me neatly to my second point.

Every outlet has an angle - find multiple sources.

If you can - always, always confirm a story. Especially if it is just breaking. The need for news media to get on something the moment it starts to happen sometimes (often) overwrites the implied necessity to report accurately. Also, there are certain news organisations that have a specific agenda to push; for some of them, it will be obvious. For others, less so.

Even if a news organisation has a leaning which agrees with yours, do make sure to see how the other side are reporting. Even if half the world will know that an event has occurred, the majority will have heard about it from a different source, will have seen it from a different angle. Certain facts may only get presented by people who will benefit from them being known.

These two get bundled together because a lot of news stories seem to be a simple unquestioned repetition of a statement made by someone. That is effectively the same as allowing that individual to write an opinion piece and publishing it as if it is accurate reporting - unless somewhere in the article there is some degree of accuracy-checking or fact-finding.

This can often be a subtle way in which a news outlet can convey the agenda they wish to without seeming to be biased. The less obvious it is that the article is just regurgitating the opinions of the subject, the more likely it is that the subjects views align with the outlet. And of course, every news outlet also tends to have opinion pieces - it is considered good journalism to make it very obvious from the reading that it is such a thing.

News outlets and regular people alike alter the scale of a story.

The next time you see a news story stating "people are outraged", realise that they could be talking about half of the world's population, or they could be talking about six people on Twitter who have more than eighty followers each. Be wary of eyerolling at this new trend which has apparently taken over the entire world, when in actuality there's only about twenty people posting the same youtube video.

At the same time, downplaying something is a common trick - one that doesn't usually survive cross-referencing with other sources. The scale of that oil slick will probably be made obvious in one way or another, and if you take each source on balance, you will probably find your way to at least a close approximation.

We are more willing to believe news that aligns with our own personal bias.

It is a difficult thing to accept that a company that makes something you like, or a piece of media you enjoy, has done something wrong. It is also a difficult thing to accept that an individual or organisation that you dislike has done something right. That is on us. When we do our due diligence on the topic, we kind of have to put our hands up. Otherwise, we will spend our lives not caring much about facts and what actually happens, and instead just parrot opinions at each other like we are extras in Brave New World.

Examining our own built-in biases, asking why we have them - that is important to us as people. Not just in terms of understanding the news - in terms of our personal development. I'm sure most of us were unbearable dickheads at some point in our lives - imagine if we just stayed that person. Wouldn't it suck? So, don't let that happen. If your immediate response to an article is vehement repudiation because it features a movie you like or a politician you hate, take a breath, pull up a different source, and take a minute.

Don't be afraid to take a break.

Keeping up with the real-time collapse of our current society, or whatever is happening to it right now, is difficult. It's hard-wearing and anxiety-inducing. Don't do it all the time. Take time to unplug. Go do something else. Play a video game for a few hours. Watch movies. Spread your wings.

Don't be afraid to ask people you know.

Do you know people who seem to be on the pulse of things? Who seem to have a handle on what is going on? Talk to them about it. Find out their viewpoint. Hopefully you know a few people that fit in this bracket. If they are cool people, then they would rather you ask than pretend you know, and we should have gotten over our shame of not knowing a thing back in high school.

Of course, people you know and trust will have their own biases - but if they have done their due diligence, they will tell you about it. If they haven't, then their bias may well become obvious as you get to know their views on a particular topic.

I hope that this blog entry has been useful. It certainly helped me, to remind myself of my own rules and guidelines: check your sources, take a breath before you read on something you think will make you angry, and don't rely on a headline to tell you what the news is.

Of course, that doesn't mean that the world isn't actually coming to an end - but at least you will be better informed about it.

If you'd care to share my blog with your friends, I'd appreciate that! If you'd like to thank me in a fiscal form for entertaining you a little bit, I do have a Patreon right here, but please - no pressure. Thank you for reading, and check my social media to the right to keep in touch.
Posted by John Aridi at 16:17