Anyone ever seen a dog, when it is told it can't do or have something? 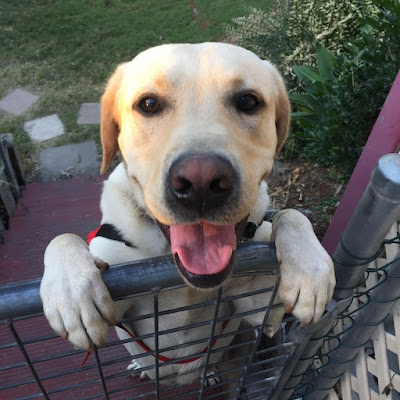 You ever seen them do the thing where they look a bit guilty... but don't back off, don't go off to do something else, they just kind of... linger? Just wait about?

If they're told to not eat something, have you ever seen them just... sniff at it? Just look at it? Oh, not EATING it, oh no no no! Good dog, told NOT to eat. Not eating. No. But... looking is fine, right? Sniffing fine, right? Yes, that's just fine.

Have you ever watched as they try and do the thing that they were about to do? Just... maybe a bit sideways, maybe slowly, as if hoping that you won't notice, if you do it slowly enough?

Perhaps you have seen one of the braver canines pause when told no, take a moment, and then just do the thing anyway, because the five-second time period in which you meant the thing that you said has passed now?

You ever noticed how kids do the same thing? 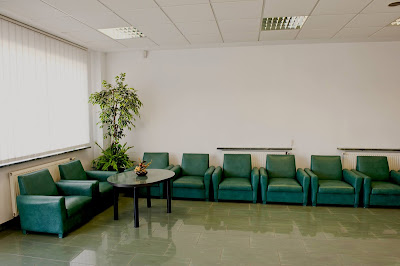 In a boring place like a waiting room or something, where they have to spend periods of time just being still and relatively quiet, and being considerate of other people, and in an environment that is so not-kid-friendly it hurts?

(Most kids anyway. When I was a kid I loved to just sit quietly, especially if I had a book. That explains a lot.)

So a child, who is understandably bored and antsy and not looking forward to having to see a doctor, is asked to stay still. Now they don't know how long this is for - waiting times in a doctors office are a mystery anyway, and a lot of children have the same timekeeping capacity as dogs. There are three times: The Past, The Next Five Seconds, and An Infinite Period Of Time Impossible To Imagine.

So the child becomes still. ...for a while.

But chastised all the same, the child becomes still, if sulky.

Until the cycle begins again.

Now - and I apologise for this - picture our government. 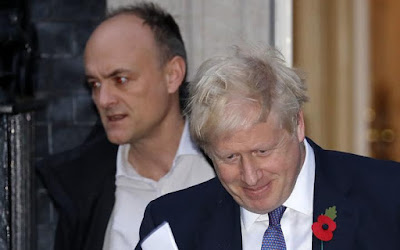 Yep, that's them, right there. They look like the equivalent of Bulk & Skull from a UK variant of Power Rangers.

Now imagine that a massive pandemic starts spreading across the world, that you had months of warning about, and that your plan to deal with involves not helping anyone, not following the proposed pandemic measures from an exercise conducted in 2016, and instead just letting people die because it's more economical. 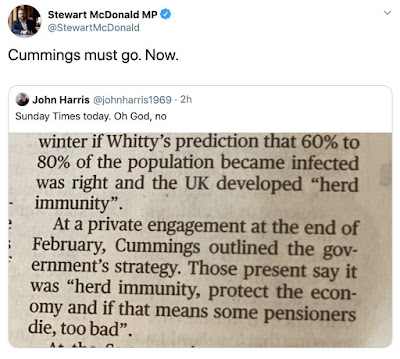 Now obviously the general public heard about this and were outraged, so the government backpedalled on it immediately - and even claimed later that there was no herd immunity plan at all, despite there being clear evidence that there was, as reported here.

So measures are put in place - begrudgingly, and slowly, leading to a significant quantity of preventable infections and deaths. Doing what a lot of other countries did, sort of. The messaging coming out of the government was fairly limp, but what do you expect, they aren't very capable.

Some other countries enjoy success. Notably, countries that went in hard and fast on the lockdowns, and didn't faff around for ages saying "well maybe stay at home if you want but everything is fine".

...then what if we open just a little bit?

What if some of our advisers and MPs just... go and... you know? Go off and do things? Not EVERYONE obviously just some people?

What if we open just a little bit more, and change all of our signage from "red iconography stay home stay home STAY HOME" to "green iconography wishy washy be alert maybe"?

What if we open yet more, before we've even tabulated the figures from what happened the last time we relaxed lockdown?

What if we shift the onus of responsibility from the government onto the British public, so that it is the people's fault if anything goes wrong?

What if, after all of this, and after all of the half-assed messaging about staying home and wearing masks and social distancing, we then open pubs at 6am on 4th July - but INSIST that everyone will socially distance and wear masks and be safe and definitely do all the stuff they were told to because drunk people are famously good at following instructions? Just like reopening schools, filled with schoolkids who - also - are famously good at following instructions?

Just hoping that you wouldn't notice? 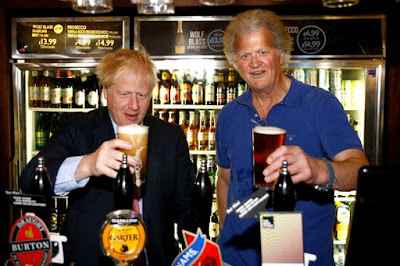 Yeah, that's where we're at.

Setting a stopwatch for two weeks again. And if you've been to the pub, please don't take it personal if I don't want to hang out.

If you'd care to share my blog with your friends, I'd appreciate that! If you'd like to thank me in a fiscal form for entertaining you a little bit, I do have a Patreon right here, but please - no pressure. Thank you for reading, and check my social media to the right to keep in touch.
Posted by John Aridi at 12:22