This is Ouroboros, the serpent that eats its own tail. 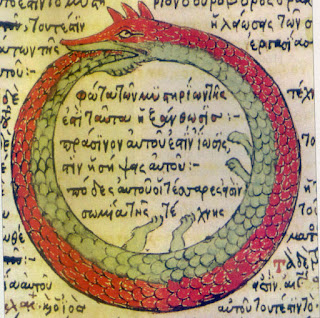 It's quite an old idea - the earliest interpretation is from almost 3,500 years ago, in an Egyptian funerary text. It has all sorts of meanings attached to it, like life and death, creation and destruction, and other eternally cyclical things.

I see a creature eating its tail and it doesn't make me think of eternity.

I mean sure, if we're dealing with a mythical beast - like the world serpents of Nordic mythology or similar - then it could be something that literally lasts forever, locked in its shape. What I think about is something more prosaic: a living being, devouring itself to stay alive just a little longer. Autocannibalism.

I see the human race.

We feed on ourselves - as a mass, rather than individually. Doing so individually is a crime. Letting the species as a whole choke on its own tail is actually sort of encouraged.

How, I hear you ask? Let's take a look at feudalism.

We have the liege of an area, let's call him Lord Snakehead. Lord Snakehead has those lesser nobles that exist within his territory, the knights and so on that have a position of status over everyone else - let's call them the Order of the Belly. This would follow, in my rather blunt and obvious simile, to the farmers and workers of no social standing to be labelled as The Tail End.

I think it's pretty obvious how this works.

The Tail End works hard. They produce a significant amount of goods and material, more than they actually need to live - in fact enough to make them quite comfortable if they got to keep all of it. Obviously...they don't, because they are being fed upon by Lord Snakehead. He devours his fill from The Tail End, and in return provides the Order of the Belly with nutrients - though not as much as he gets, of course. Just enough to know that they are more important than The Tail End. The fact is, though - if The Tail End ceased to exist, the Order of the Belly would be next in the mouth of Lord Snakehead.

Because modern society is fairly feudal in and of itself - we might not use the same old terms, but we sure seem to have the same structure - it's easy enough to see how this example applies.

Of course there's more avenues and more structures than my example. More than one snake - more than one tail. Each individual business is an Ouroborean structure. Goverments, too.Large organisations. All snakes that feed on their own tails - there's always a head, and there's always a tail, and most people fight to be the belly.

"But John," I hear you cry, feathers falling out of your socks and pork pies in your hands. "But John, isn't that just the way life is?"

Well yes. It IS the way life is. It isn't how it HAS to be, but it IS how it is. Nobody who can change it has the interest in putting in effort to do so, because even if they wanted to eat less of the tail, their peers have interest in making sure they keep it up.

The problem is that every known case of autocannibalism has to draw a line somewhere - and the final line that is drawn is when enough of the eater has been eaten that they expire.

It's not sustainable, and I don't mean that in a sense of environmental collapse. That is happening, right now, and is indisputable. The science is incontrovertible. Denying it is like denying that the sun rises. I mean it in the sense I just stated: in the end, what happens if the serpent eats too much?

If we could trust Ouroboros to keep eating at a steady pace, then perhaps it could continue - and the mythic beasts of yore can be trusted with such things. They are beings of their nature, a nature they can't avoid or escape.

The problem is, Homo Ouroboros is a slave to its nature, too. That nature is inherently greedy - as I've previously discussed, humanity's inherent insecurity leads it to try and dominate its environment, and a primary method of it doing so is through acquisition of resource. It's what we do. So we can trust the serpent to constantly try and eat more than it was ten seconds ago.

Which, as we have ascertained, is unsustainable.

How does this work in practical terms? Well, you can see it every day in the way we live. People having to dip more and more into their savings as the needs and wants of those who feed from them - those who benefit from their work, via surplus value - drive them to raise prices and lower payouts. Trimming away the fat an inch at a time. Every way we look, we see businesses focusing on making cuts and savings - and do those ever result in lowered prices? Of course not, they aren't FOR lowering prices. It's the snake gobbling more of its tail.

It's been pointed out that the less the average individual gets paid, the less products they can afford to purchase, and the less companies get paid. I believe an accurate term for this is cost-push deflation. It's happening, right now - but as long as we keep cutting and keep kicking and do whatever we can to keep our heads above water, then we don't have to care.

You can see it at work in the wake of Grenfell Tower. Regulatory cuts and basic greed. Lives of the wealthy made easier at the cost of the poor - and for the victims of this travesty of justice, many of them paid the ultimate cost.

For a long time there has been a trend of demonising and persecuting the homeless. As society has...I hesitate to say advanced, so let us say changed, those trends have changed. The boundary has grown bigger. Those who require or receive benefits because they don't have a job were next. Following that, the victims became those who were poor. It won't be long until the next victims are those who are less poor. Inexorably, the serpent is devouring its tail - and soon, it will be the belly that is being fed upon.

How long until the head reaches itself?

How long until Homo Ouroboros autocannibalises to the point of its own demise?