It's that time, folks. Real life and the global situation got saturated with nastiness and bullshit, so I decided to avoid all of that nonsense by doing a blog with topics provided by you, my favourite audience.

Presented in order, names removed to protect the innocent.

Boobs - It's a perennial favourite. And in fairness I did ask for it. Pretty much. Yes, very good.

What is the best or your favourite movie ending of all time? GO! - So there's a lot of good choices for this one, including the real ending of Blade Runner that doesn't answer any questions, and Arrival's amazing ending that I can't discuss with you because it's big old spoilers. If I had to pick but one? It would be Donnie Darko; a gut punch of an ending that leaves you reflecting on what you just watched, and wondering if this was really how it should have been.

Famous people you have met. - Like MET met...I dunno. Not many. Like I guess Bear Grylls counts, he came into the library once and was just super-chill and down to earth. Dave Grohl ran into me at Reading 2000 and didn't have time to stop. And I used to live next to Meridian Dave, the news reporter.

And how can this be? - For he is the Kwisatz Haderach!

Theresa May is doing a great job. She seems to have everything in hand and has the best interests of the country at heart. Discuss. - We're on a roller coaster. The track ahead is broken as fuck and not all of us are strapped in. Theresa May is sat in the booth, texting her mates to borrow money and try and get someone to cover her shift, while the rest of us hurtle into oblivion. She's asleep at the fucking wheel, and you can't trust the bunch of charlies that she calls a party or a cabinet to be of any use either.

Do you feel like Literature and it's inherent escapism can have a damaging effect on young People? (A watered down dissertation question.) - Fuuuck okay. So I think that too much escapism can be harmful - to everyone, not just young people, I mean we all know someone that spends every free moment drinking and partying. But I also think that NO escapism can be harmful, because this world is filled with shitty things to deal with. I think that as long as your way for getting by doesn't stop you getting by, it's probably okay. Moderation in all things - including moderation. So, yes, I think it can have a damaging effect, but probably less than just...being alive in this day and age. And that's even assuming I mean this society, which is less harmful than a great many.

Victor's Secret - Like Victoria's Secret but for dudes? Sure, suits me. I mean - suits me if it also takes on board the incredible bevy of problems I have with the clothing industry in general and the lingerie industry in specific. (Almost all of them involve pockets and sizes.)

Stargate sg-1 - This was great. Proper saturday-evening style watching. A bit cheesy, super-nineties, with a fantastic cast. I find it hard to watch too many episodes of ANYTHING in a row, as I begin to notice the formula and get annoyed by it, but SG-1 is fantastic viewing. Anyone ever notice how the guy who played Te'alc wrote a bunch of episodes, and in every single one, Te'alc got some play?

Boots - Excellent as an item of footwear, reasonable as a shop on the high street, fucking awful as a character in children's television.

Tardigrades - I love these little bastards. Like what the hell are they? What the hell even are they? Little eight-legged bastards half a mil long at their biggest that can survive in apparently literally any environment and are found in every biome on the face of the earth. I really hope that in a few million years, when we've fucked it all up and the human race is resigned to the Ozymandias shelf of the history books, that the tardigrades get their title shot. They'll do better than we are.

The perfect mech for you. - It's the HeavyArms Custom, as seen here: 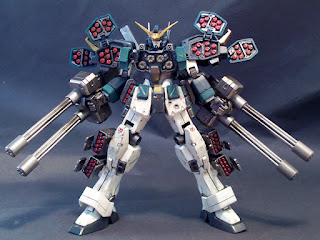 I got this picture from here; great build work you did on this bad boy. And why would this be my perfect mech? Look at all that firepower. It's not slow, it's not ponderous, but it carries enough megatonnage to flatten an entire city. I love it.

Dealing with pain? Or not, if you don't want to talk about it. - I'm almost always okay to talk about this, cos I deal with it...like...all the time. In the end, though? It just becomes a part of your day. Like it is just another thing to contend with. I need to go to the bank, I need to eat something later, I need to book an appointment, and I hurt. It's often bad enough that I have to cry off doing tiring or stressful things. Sometimes, it's bad enough that I have to cry off doing reasonably basic or simple things. Sometimes it doesn't bother me at all, and that's the worst time, because I get a lot done and then I feel it in the morning. The best way to deal with pain? Respect your painkillers, only take what you need, and don't push yourself more than you can handle. Your body will have its vengeance threefold.

Cthuhlu, Evil beyond imagination or just misunderstood? - Beyond imagination. Evil to us. He has a totally different morality system, he's not like us at all. If a human acted the way Cthulhu does, he'd be evil, so to us, he's evil. We have no idea about morality where he came from, if they even have any. So I guess, to call him evil IS to misunderstand him. I don't even know if he's a he.

Sense of belonging - This is a rare thing for me but a very welcome one. It doesn't happen often, not even when I am in a place wherein you'd expect to feel it. When it happens, though; oh, so sweet. That moment of not feeling like you're an outlier on the graph. That sudden rush of social acceptance and a belief that you're actually doing okay. You pass it off all the time as just something that other people chase, and then it happens, and you understand why it can be such an addictive thing. Because it's beautiful, to have that moment, where you take a breath and just...belong.

Obvious one- Trump's banning of transgender army personnel - This motherfucker here...okay. So this guy is basically trying to carve the White House and the nation into a big old statue of himself, because he's a child who has failed at most things he's attempted in life, but never had to really suffer any consequences for it. So he wants to obliterate the stuff that came before, to make room for his own statue. What was one of the last things Barack Obama did? Pardon Chelsea Manning, a trans member of the US army. That made Dumpy look bad. Dumpy hates looking bad. So he turns those little eyes and that tiny mind on Chelsea, and on the people decrying him, and he puts two and two together and ends up with...two. And in a genius move, to save the military not very much, he decides to announce a policy change that he can't actually make, which would save a fifth of the money used to provide military personnel with Viagra, which the Pentagon then has to clarify isn't actually their policy - he reveals he's a bigoted douche, the trans individuals in the military feel markedly less safe, and fuck-all else changes. Pretty par for the course, really. Which is an appropriate metaphor, given how much time this prick spends playing golf. I HATE golf. I fucking hate it.

Semiotics in superhero fiction - Let's be real. It's hard to imagine any kind of superhero media - comics, books, TV, movies, cartoons, anime - that isn't up to its neck in semiotics. The very concept of there being a hero, of there being a person better than most who is willing to stand up and do right, is a semiotic concept. There's an entire swathe of shit I could go through here but I will address one thing I find really, really cool. The Sentry - arguably Marvel's most powerful hero, who isn't a literal deity - has his greatest enemy locked up in a vault, sealed tightly away. Somewhat late in the run of the comics, a character enters this sanctum in order to confront the Darkness, as he calls it. When they get into the vault, they find no incredible monstrosity, no infinitely powerful enemy. Only two objects: a chair, and a mirror.

Favorite sci-fi tropes. - Power armour, humans not actually being special, blue collar space travel, practicality over flashiness, other races being weirdly inexplicable in some ways but utterly relatable in others.

Resident Evil - First two games, awesome. First movie, passable. Literally everything else needs to fucking do one. It's over. The franchise is over. The only way they could get away with Resident Evil 7 even existing is basically making it a first person Silent Hill game that only becomes Resident Evil-esque close to the end. Let it go, guys. You had a good run. It's over.

Butts - I like them. Especially if they are large. To this end, I can offer you no falsehood, and my other friends and peers couldn't possibly refute this statement.

Bardic elves - Fuck them. BARDING elves, elves used as armour for horses or other mounts, could be useful. Bardic SHELVES could possibly save a lot of space in a party - don't take up a slot with a glorified folk singer, pop him on the shelf and bring along another Fighter or a badass Rogue. Bardic elves? Do one.

The existential belonging of unicorns to soviet Russia, and the impact of the war of centaurs on the inherent global unicorn populations... - Look, it's been roundly proved that the war of centaurs had literally nothing to do with the unicorn populations. In fact there was a very tiny spike at the beginning of the war, and that was so small that it wasn't statistically relevant. Correlation, not causation. Now if you want to talk about a real serious threat to the unicorn population globally, you need to look beyond soviet Russia. As it doesn't exist any more, the things that replaced it are inherently difficult for unicorns to survive in. They are often hunted by the Ukrainian griffon, or the lesser spotted toxic Urals bear. Most importantly? Every time someone believes in unicorns, a unicorn dies. That is a terrifying epidemic, and threatens their very existence. It's this kind of thing that the biologists and zoologists of the future will strive to solve as best they can, and god speed to them, every last one.

...and then there was another thread where people posted a lot of gifs about boobs, which was nice.

Thank you, folks. This one was fun. We talked about serious things and silly things. Just how I like it.

If you have any more ideas for things for me to chat shit about? Write it down somewhere - cos I do these on the fair regular.

Thanks for joining in!
Posted by John Aridi at 19:27

Email ThisBlogThis!Share to TwitterShare to FacebookShare to Pinterest
Labels: Q&A