The Discovery And The Dread

So being something of a nerd/geek/dork I often see trailers and showreels from things that I immediately want to see more of, or at least am curious about. Hell, sometimes all you get is a trailer, or a short pilot - and that in and of itself is pretty great.

There's something I have become aware of, though. Something creeping up my back whenever I see such a thing - a sense, an awareness of the object I am witnessing and how it will be perceived by others.

An age ago, I said a little something about terrorist attacks - and the event being overshadowed by what follows in its wake.

Of course, what I'm talking about here is less serious. I mean. Surely.

To get an idea of what I am actually getting at, here's an image from an upcoming cartoon show. 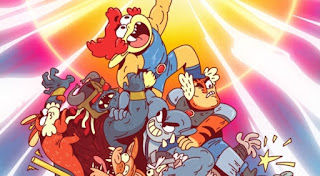 It's called Thundercats Roar, and it appears to be a reboot of the original 1985 series in a new style, with a sense of humour, aesthetic and pacing more in keeping with a modern audience.

Now, when I saw the intro, I was highly amused. I mean - just look at how these guys look. Look at Panthro's grin, Tigra's concentration, Mumm-Ra's fury, Lion-O's cheery yelling. This could be fantastic. Look at the COLOURS. It looks like how tropical fruit juice tastes.

Five seconds into watching the intro, though, I was suddenly gripped with a whole other feeling.

I became unpleasantly aware of the existence of haters.

Now, haters are nothing new. Especially not to me. I have been witness and subject of haters hating for three decades. I myself have been a hater for various things, though as I will discuss later - I changed a few things about that which I hope made me a little less unbearable to be around.

I realised, as I watched these characters running around to the fast-paced music, that a hundred thousand angry youtube videos had just been born in the minds of the viewers. That Twitter's hot-take bar was about to go critical. That yet another item in the mental catalogue of my fellow geeks has been... and I can't help but shudder as I type this word...

It's almost like my actual enjoyment of this brand new spectacle, which I am looking forward to most distinctly, was tainted by the immediate knowledge of the acres of shit that are going to be spewed from the mouths of people who just have to let the entire world know just how BAD this is.

It doesn't matter if it is actually bad, by the way, and that's the worst thing. It's bad, because it is different.

Let me remind you of the Thundercats reboot before this one. 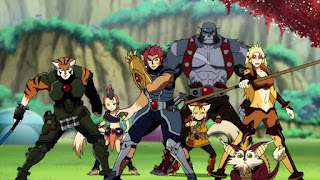 This was back in 2011, and nobody watched it, and a lot of people talked shit about it.

LOOK AT PANTHRO. Look at him. He looks awesome. He looks like he can actually lift the Thunder-Tank. (Unlike the old one, who could toss it around with apparent ease.)

But this wasn't enough. No, the actual quality of the article was shit on, because - and stop me if it seems familiar - it wasn't like the original. No, it seemed that Thundercats had been...

Let me remind you of what the original Thundercats looked like, so we're all on the same page here. 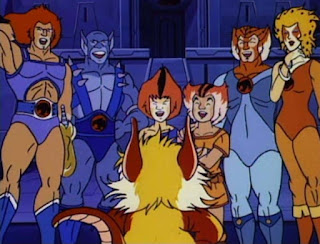 We loved the original cartoon. We did. But we also have to be real with ourselves. It had flaws. It wasn't perfect. It was also very much a product of its time, which is partly why people like it, but also brings with it a certain amount of baggage.

A major criticism I am seeing of Thundercats Roar is that it looks like several other cartoons that are current. A major criticism I saw of the reboot in 2011 is that it looked like several other cartoons that were contemporary. Guess what? The 1985 version hardly broke any new ground either. It looked like all those other 1980s cartoons. It had half the same voice cast, some of the same sound work, same techniques used to indicate laser fire and other special effects which were difficult to do on an inked cel.

The sheer amount of people that vomit constant complaint about modern cartoons fitting within a specific style...well, this is why art history is important, folks. This is why it's good to understand something academically before you start to shred its pop-culture facade. Art has phases. Art has styling which occurs in cycles, which become the mode, then fall out of fashion, then become retro, then become vintage, then become antique.

Take a five-year slice of new cartoons, compare them all and I promise you, you will see similarities. You will also probably find at least one meme with that bracket where someone has compiled all the faces looking similar (the blank smile for the cover, for example) and contrasted it with an era they prefer wherein they have cherry-picked the interesting and dramatic deviations from that standard. Forward or backward, this happens a lot.

Nevermind that almost every cartoon or show that requires marketing requires some shots and frames which are as basic as possible, to use as stock for advertising. Nevermind that it is possible to find both extremes in any era of cartoons - that Disney copied their own old line-work, and yet also produced radically different animations that still bore their hallmark style, so unmistakably Disney and yet so varied.

I knew all of this would happen the moment I watched that intro. I can't find a good copy of it on youtube. All I found was people whining about it.

That's a feeling that I think needs a name.

The creeping dread that comes from seeing something, liking it, and knowing immediately that people are going to complain about it - needlessly, and unfairly.


I know several folk who learn about things happening not because of a news flash or someone telling them, but through back-tracking against the reactions. Because that's what happens, now. Backlash. Huge and immediate and sometimes ill-conceived depending on what is being lashed out against. Anyone who pays any attention to anything online or in the media has an idea as to how this works, and can see it coming.

Don't get me wrong. A lot of shit gets called out immediately, and deserves to be. That fucking ridiculous Kendall Jenner Pepsi advert? Yeah, that deserved to be ripped to shreds, it was a farce.

I don't think I saw as many angry videos about it as I did about this new Thundercats, and it isn't even out until next year.

The absolute worst thing is that the deluge of bullshit - the inescapable complaints, which I can even hear being composed in my own head just in expectation - will contribute...precisely nothing of any value to any of us that have to navigate it trying to find a decent upload of the show's intro or whatever.

There's only so many times I can hear someone talk about an entire franchise being ruined by something, and not roll my eyes clean into the back of my skull. You want to talk about franchise-ruining? I'm a Transformers fan. We've had five execrable movies, three web series that have been utter dross - and even that wasn't enough to ruin the franchise, because there's GOOD stuff out there too. Even while the latest messy CGI bullshit rakes in that military money for making the US Army look good, at least some of that money gets put into making neat toys, or the IDW comics, or the potential of there maybe being an animated movie again one day.

If you are suddenly filled with fury about a cartoon - please, just bring something to the conversation. Something new. If your immediate reaction to something is "this is going to be fucking awful because X Y and Z", ask yourself who needs to hear this. Ask yourself if your take on the offending article is actually worth projecting into the ether, for everyone else to try and step over as they look for good content. Maybe even assess why you dislike the thing, and ask yourself if it's a personal taste issue or an actual flaw in the work. Does the world need to know how little you like Steven Universe or Gumball? And how this Thundercats will be awful because it is stylistically similar? Do we, the human race, benefit from knowing that this is your opinion?

I hate things. I hate a lot of things. You'll often see it in this blog. That makes me something of a hypocrite, sure - but then, I like to think that if I hate something, it's for a decent reason. That my loathing of Transformers 5: The Last Knight was justified because it was legitimately a foul piece of cinematic garbage, not because the intro looked a bit like another cartoon I'm not a fan of. Maybe I'm wrong. Maybe I do need to slow down on the hating, and try and talk positive about stuff, even stuff that does ACTUALLY suck.

Maybe, though, I can also suggest to those who are convinced that Thundercats has been ruined:

The old series still exists, and you can probably get it on DVD.

Don't come screaming when you remember all the rubbish bits, though.
Posted by John Aridi at 10:28