Women On The Battlefield

This is the cover for the forthcoming popular shooting game that I probably won't play, Battlefield V. 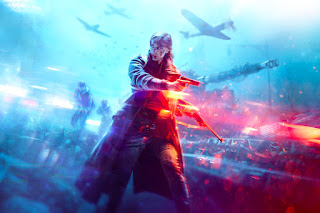 Looks much like all the rest of the covers of the series - contrasting colour flares that seemingly come out of nowhere and are apropos of nothing, bad-ass main character front and centre, general silhouettes of war and stuff in the background.

Guess what the usual crowd have been complaining about.

I don't feel the need to explain that women were heavily involved in all sorts of parts of WW2. That much has been done by pretty much every woman on Twitter that has seen the original set of crybaby complaints, and I feel no need to add to that - though I applaud every snarky takedown that I see, because it's totally justified and needed.

Having skimmed every other Battlefield and Call of Duty cover, and seen something of a pattern, I an only assume that the problem is that this cover is a problem because it's not got a white dude on it. Much like Battlefield 1, which inspired a similar furore - I found an article written a year and a half ago (that I'm not going to link to) claiming that it "black-washes" history.

Which just reminds me of this simple true statement:

When You’re Accustomed to Privilege, Equality Feels Like Oppression.


In recent times, various industries are shifting away from their standard target markets. We're seeing movies come out which upset the status quo. The outrage at Black Panther only having two white cast members stands out, and...well, it did pretty well at box office anyway, didn't it? Other recent scuffles over a movie "pandering to SJWs" include The Last Jedi, which again cleaned up. Both of them broke a billion dollars apiece, which only really tells me one thing:

Even if the same old crowd (and you know who they are) bitch and whine about your product, it will still sell, so you don't need to listen to them.

Let's look at this another way.

As movies have started to claw back Hollywood's generally sexist and racist baseline, and to elevate the medium of cinema to something better than it was two seasons ago, video games can do the same thing. As movies start to represent people, and to hell with those that start seeing their previous (unrealistic) dominance slip away, video games can too. The dollars they lose from people who are against proper representation (like, let's say, the guy that used to produce Eastenders) will be made back from the people seeing themselves represented properly.

"But John," I hear you cry, hands held aloft and dripping with chocolate pudding fresh from the vine. "But John, that's a terrible marketing decision, to deliberately alienate a market!"

Ah, but you aren't alienating a market.

The market is alienating themselves, and you should let them.

Let them go play whatever it is they want to play. There will always be the option where the white guy is the hero. In quite a lot of games you get to make your own character, which should solve that particular issue, but it seems the same mob of goons still take exception to options being available to other people. I don't know anyone personally that was butthurt by They being a pronoun you can select in Battletech, but I know there are people out there who object to it even being an option, because it stops them pretending that non-binary and trans people don't exist or something.

Fuck that. Put it in anyway. Make your games and make them good. Step forward. Video games has been seen as regressive for a long-ass time, for good reason. Leave that funk behind and start making games for the rest of the world, not just white dudes.

I will leave you with a link to an article about badass Russian female soldiers in WW2, any of which deserve to grace the cover of a video game.

If only there was a series of games specifically about WW2 snipers...
Posted by John Aridi at 11:30