I am going to open with the dictionary definition of the word Poverty.

We all on the same page? Right.

Now, for all my folks who have chronic illnesses, mental health problems, and whatever else wrong that other people find it hard to talk about - how many of you have found "healthy" people (or people who don't suffer from the same thing as you) trying to find some treatment or cure that you haven't considered? How many have suggested a vast number of potential fixes that you know full well won't work, maybe because you've tried them already?

I've talked about this before. About how people want to believe that there is always something you can do - that there is a reason why this thing has happened to whoever it has happened to, and that as long as they avoid those circumstances, they will be safe from the condition. It's a fallacy of course. Anyone can be suffer from specific mental health ailments. Yet still there is a culture that prevails, that when it eventually happens to us, we fall into a hole of wondering how it could possibly happen to us.

Unfortunately, it is this manifestation of anxiety avoidance that the general public indulges in, that means that cuts to - and lack of provision of - mental health treatment is met with very little protest.

You may start to see where this is going.

Extreme poverty is measured as individuals having to subsist on $1.25 or less. In the past forty years or so - between 1981 and 2008 - the percentage of the world living in those circumstances has reduced significantly, from around 52% to around 22% according to the World Bank. Which is good news, frankly - though a standard "statistical skepticism" should apply here. If the 30% of the world lifted out of that bracket are now all living on $1.30 a day, perhaps we haven't actually made as remarkable progress as we thought. (Especially given that, calculating for average inflation, that bracket should now incorporate people living on $3.04 a day.)

Whose fault is that?

Weird question, I know, but - what is your first instinctive answer to that?

Herein I would like to introduce you to something called secondary poverty - a term coined by sociologist Seebohm Rowntree during his studies of the poor in York in 1899. Secondary poverty is, basically, the idea that people can push themselves into poverty by spending their income on something they don't strictly need to survive. Temperance movements (not The Temperance Movement, they're a band, a good one too, check this out) made a lot of headway on the notion that poor people were often poor because they smoked, drank and gambled their way into poverty.

Which gets to be a great scapegoat.

Herein is a series of tweets made by Claire Lehmann, founding editor of Quillette magazine and apparent member of the "Intellectual Dark Web". 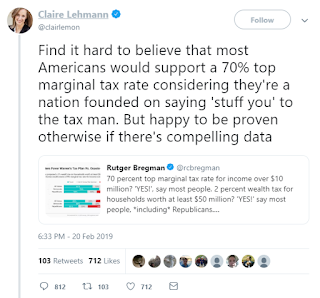 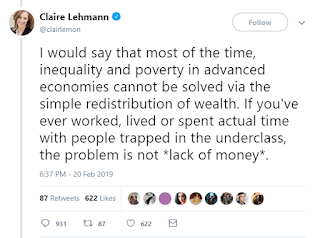 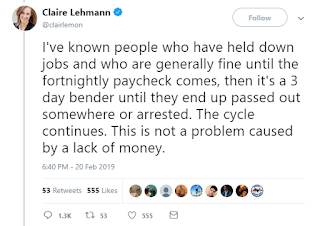 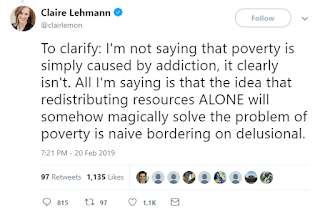 Claire's argument against a person who earns over $10,000,000 a year having 70 cents taxed off their ten million and first dollar...is that poor people are poor not because they don't have money, but because they go out drinking.

She is not alone in projecting this particular viewpoint. It is a perspective often voiced. It's an echo of the puritans, of the Methodist temperance movement, of the US National Anti-Gambling League, of those who happen to have a lot of money themselves, of those who are against any help being given to those who have to go without.

Do they truly believe what they say? I'm not sure. To do so would indicate a significant level of economic ignorance. I'd say it is more likely that they engage in knowing intellectual dishonesty, in order to fit in with the ongoing deception of meritocracy.

People like Claire Lehmann want you to believe that they clearly deserve the wealth they possess, that they have worked for. They have had no unfair disadvantage to acquire it, just as there has been no unfair disadvantage levied against those who lack aforementioned money. Literally anyone can be as successful as she is, as long as they work hard enough. It is important that you believe all this, because then, you will be willing to accept any and all injustice - because clearly, those at the bottom of the pile deserve it, through some kind of personal or moral failing.

(Quillette, so you are aware of their general angle and attitude, has recently published articles about how there's a lot more hoax hate crimes than most people believe, that the most vocal progressives are probably mentally ill, and that socialism is basically evil. It's that kind of "intellectual magazine".)

Poverty is literally a lack of resources. That is its definition. We measure poverty by how little resource individuals and households have. If we accept that solving poverty is a necessary thing - and we should - then the only way TO fix it is to move those resources, to increase the amount of resources available to those without.

Those who argue the loudest that such measures won't help, quite often seem to be those who have an abundance of those resources. A pre-emptive defence of the treasury. And everyone who repeats their angle, everyone that takes up their narrative, reinforces their sense of security. That even the tiniest sliver of reduction of their already-considerable fortune and earnings would be the most grievous wound, regardless of who it helps, of the good it does.

Greed is an easy motivator to project. Something I covered in a blog I wrote a long-ass time ago.

Don't buy into it. Do your research. The wealthy can't be expected to speak for the poor - not while feeding from them.

If you'd care to share my blog with your friends, I'd appreciate that! If you'd like to thank me in a fiscal form for entertaining you a little bit, I do have a Patreon right here, but please - no pressure. Thank you for reading, and check my social media to the right to keep in touch.
Posted by John Aridi at 14:46