Warning - ahead will lay spoilers for Star Trek: Discovery.

For a long time Deep Space Nine was my favourite Star Trek series.

This was mostly because it was the one that was least... you know... Trek. It was often about complicated political scenarios involving multiple different state and non-state actors that were not necessarily bad guys or good guys. Even if the show was sometimes set up to make them look that way - like, I'll rattle on endlessly about the kinda racist symmetry between Trek races and their real-world counterparts.

It had a Captain that wasn't really a Captain - and Sisko was the best Captain, even if he wasn't one until later. It had a great support cast. It didn't subscribe to the Federation being the absolute best and everyone else being various shades of worse. It openly held up a magnifying glass to the Federation and showed its flaws for all to see.

Because, honestly, the Federation kind of bores me.

It all just kind of reeks of a big pat on the back, for no apparent reason. It seems to be what people think will be the victory, the endgame, while also being... really bland, for a government that actively encourages constant improvement of artistic pursuits. 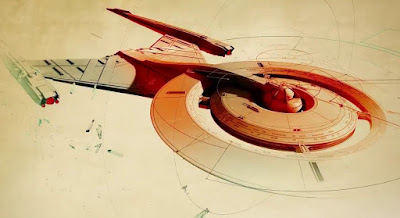 The last episode of the two seasons it has run for aired on Thursday night, I only caught it last (Saturday) night. So the finale is fresh in my mind, and boy howdy, was it an actual... finale.

But I get ahead of myself.

Characters, for one. I don't remember a TV show any time in the recent past wherein I have genuinely enjoyed seeing every single character that shows up. I literally found myself thinking - and in some cases saying - "I love her" once every couple of minutes. That is genuinely good character writing, exceptional casting, superb acting. I almost always find someone I hate seeing on screen. This time round - not a one. There is nobody I inwardly groaned at seeing when they showed up.

The main character not being a Captain is a nice twist. It means a natural focus split in each episode. Following Michael Burnham (a black woman being the lead in a Star Trek series, YES) and the Captain in question (it changes a few times in the series) doesn't feel weird, and it doesn't feel like we're being forced to catch up with the B Team every time the A Team requires a time skip. 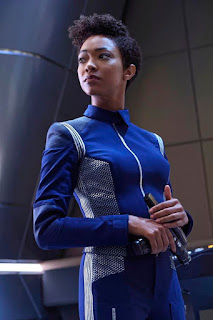 Burnham is a masterclass in finesse. Every bit of her behaviour is believable. Every motivation she has is clear. Sonequa Martin-Green was not handed an easy role in portraying her. Full human by birth, adopted by a certain Vulcan who married a human, raised Vulcan, she is at times remarkably understated and at times hell-raisingly intimidating. She is brilliant and warm and stubborn and competent and fallible - like any good main character, she contains absolute multitudes. It makes her a good foil to the Captains she serves under - both on the Discovery and (during the pilot) the Shenzhou.

Herein is the spoilery bit. This is your last chance to turn back. 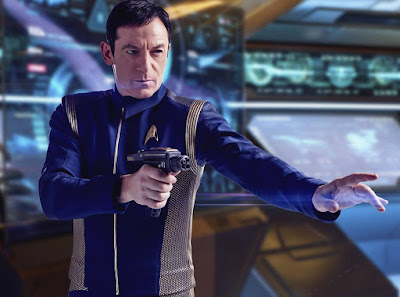 You know this guy gives you the genuine creeps from the very beginning. There's something just not right about him. Just not right. He comes across like a caged predator the entire time. Jason Isaacs absolutely owns this role. Look at him. Whenever he is on screen he devours the competition like a snack. Just menacing enough to keep you guessing but never so overtly menacing as to make you overtly question...

...until it turns out that he's a runaway war criminal from a mirror universe and he has lied, cheated, stolen and murdered his way here. And then it all makes perfect sense. PERFECT sense. Also, congratulations to the writers of the first season of Discovery for making the mirror universe actually have a point.

And that point isn't just having Ensign Tilly, who is MY FAVOURITE, get dolled up as a warrior queen to talk to the emperor of the galaxy. 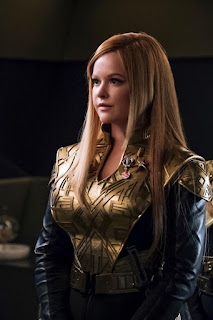 So then the second season comes around, after some dramatic real-world events that resulted in the writers being changed - and the series does take a different direction. So rather than having Saru continue as acting Captain, events transpire that lead to a whole different individual sitting in the chair... 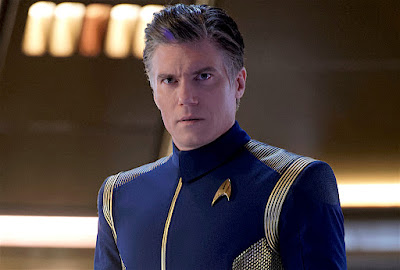 I have a new favourite Captain.

Pike is charming, witty, down to earth, competent, friendly. He's all the good things from all the other Captains that you like so much. He is also an inspired bit of casting - Anson Mount looks a LOT like the various and sundry other individuals that have played Pike prior to now.  Unlike the other times he has shown up, in Discovery, you actually get to see him shine.

Shine he does. He steps up to the role of taking care of Discovery with a degree of charisma that would make Kirk jealous, a consideration for his crew that Janeway could learn from, and a pragmatic approach to solving problems that Picard might benefit from. And something something Archer. I dunno. The thing is - due to the way the plot spins out, Pike demonstrates... actual legitimate heroism. I'm not going to go into detail about it, but suffice to say, he shows more genuine deep-in-the-bone moral courage than I think I've ever seen in the Federation. 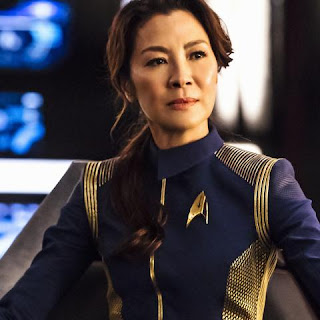 ...or Emperor Phillipa Georgiou, of the Terran Empire. 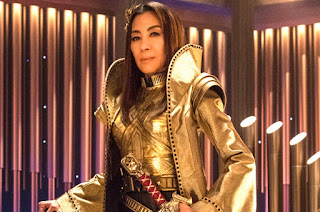 Michelle Yeoh must have had such a good time playing two such different people. She spends a lot more time in the latter role than the former, but - boy, is she good at it. To be effectively a peaceful philosopher for two episodes, dedicated to the Federation and that which it stands for - and to then be this barbaric, sadistic, ruthless killer? Brilliant.

If only there was more time. If only I could waffle endlessly about how much I love the whole cast. About how an already-solid group of individuals is further swollen by the plot of the second season.

But if I spent all that time talking about the people, I wouldn't spend any time talking to you about the plot, which was friggin' great. It had continuity. Continuity! Can you even imagine!? It had a point! It made sense! It had time travel and dimension hopping in it and still made sense!

I also wouldn't be able to spend any time talking about the cinematography. Now... this show got into a spot of hot water because it went over-budget in several areas, early on in production. I, personally, saw all of it on screen. It looked gorgeous. How many TV shows leave you complimenting the cinematography of a single shot aloud? Let alone multiple different shots in the same sequence? It looks great - and it should look great, it's a TV show. It's FOR the eyes. Right? It's for people to look at.

Nor would I have the time to get into the subtler aspects of the show. We've been seeing this particular bit of the intro sequence for two whole seasons now: 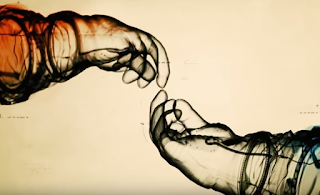 ...and only in the final episode of the second season to we actually grasp what this means.

Admittedly the show does actually feature this as a thematic, throughout. Things being so very close, but not quite. Reaching out, and not necessarily quite covering that final distance. Always being within grasp, but never grasping.

Then it really happens.

I won't go into detail. I will just give you one line:

And hey, you might even start liking Trek again.

If you'd care to share my blog with your friends, I'd appreciate that! If you'd like to thank me in a fiscal form for entertaining you a little bit, I do have a Patreon right here, but please - no pressure. Thank you for reading, and check my social media to the right to keep in touch.
Posted by John Aridi at 13:48