People Being Ugly To Each Other

My mother calls me the ultimate pessimist.

I mean, I know people so much more pessimistic than I am - HER mother, for one - but I think, probably, it is my willingness to voice it. When I have doubt that a thing will work out well, or when I believe that a particular action or situation will be used for evil purposes. I tend to say so, and so, I am pessimistic.

Things like, back in 2017, after the election, when I told her that we'd probably sleepwalk into Brexit without any kind of deal, but that was fine, because the people whose job it is to prevent that kind of thing are okay with having their tax loopholes maintained.

Like I told her at the time. I hope that it doesn't happen, but I think that it is likely. And here we are, four months away from a recession the likes of which none of us have lived through, while Boris and his cabinet of incompetents and crooks sit with their thumbs up their arses.

It's not fun, being right about shit like this.

Like, unless you are a sociopath, there's very little smugness or pleasure to derive from watching the next shitty thing happen to us as a town, as a county, as a country, as a species. It would take a very ugly process for me to laugh in triumph as the lava overcame the village.

I don't try to assume the worst in people. Individual people, on a personal level. I used to. But then I used to always assume the best, too, and look how that worked out.

The men in suits say bigoted things. They get corrected but it's just echoes. Bigots continue to be bigots. It's okay - they know it's okay, because the men in suits are bigots too, so when will there ever be any serious repercussions?

The men in suits want to make their money. There's outcry because they're making their money by punishing and hurting people and taking things from others, but the men in suits don't care. Nothing is stopping them. If something temporarily stops them they will find another way.

And it is... exhausting. Because it is this absolute, ongoing, never-ending cycle of the next shit thing happening to people that don't deserve it - and it happens daily, sometimes hourly, and it ruins (and often ends) lives. 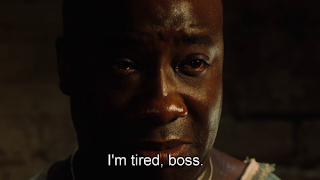 It makes it hard to see straight, let alone fight against.

But we have to.

We have to, because otherwise, it will just keep happening. If we don't speak truth, the lies will become repeated so often that nobody questions them. If we don't call out shitty behaviour, people will continue to be shitty to other people. If we don't decry hypocrisy or corruption, then it will happen more, and worse. If we don't stand up for the people under the boot, then the boot will come down again, and again, and again.

In the end, the better world, the better place, isn't a plateau we ascend to once we've punched a hundred Nazis. It comes in increments. It comes in the tiny reductions in suffering caused by each good action taken and each bad action averted or subverted.

Because a better life, like love, isn't just a thing. It's an action. It's work. It requires input, and gives output.

So we do what we can, in the face of reckless hate and insidious greed and choking malice.