The Second Coming In Wrath

"The atomic bomb is the Second Coming in Wrath."


Winston Churchill said those words when he found out about the Trinity test, conducted 16th July 1945.

This past week has seen the anniversaries of the two combat deployments of nuclear weaponry, both of which were notably against (primarily) civilian targets. 74 years ago last Tuesday, a bomb named Little Boy was dropped on Hiroshima. After levelling most of the city but not having the desired effect, that Friday, a second bomb named Fat Man was deployed on Nagasaki. 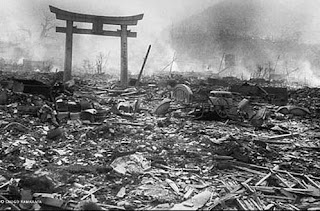 This is a torii, a gate usually demarcating the entrance to a Shinto shrine; many of these were left amongst the rubble. In a sad turn of events, during the postwar occupation of Japan, "State Shinto" was one of the things the occupational forces of the United States saw as responsible for Japan's pre-war culture, and so was thoroughly discouraged; even if the torii stayed standing, the religion itself was undermined for decades.

Before the atomic plan, the numbers were drawn up for an actual land invasion. The casualty figures in potential looked to be between half a million and four million. The figures were so great that the war department put the Purple Heart medal into mass production, to stockpile it for the inevitable amount of severely wounded individuals that would be merited with one following the invasion of the Japanese mainland. They made so many that they stopped producing them after the atomic bombings, and only actually got close to running out - despite involvement in many military conflicts since - in 1990.

The poster below was produced as part of the propaganda effort running up to this potential invasion. I doubt I need to provide a content warning for racism, but have one anyway. 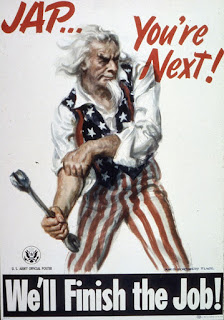 The total casualty figures from both bombings - counting those that died before the end of 1945 of radiation sickness and other injuries - comes out to around 200,000 civilian, and 20,000 military. That's approximately the population of Southampton in the UK, Baton Rouge in the US.

Was it worth it?

The debate has been batted back and forth ever since before the bombings even happened. No matter how many lives it might have saved in the first place, it was a decision arrived at in context of many other decisions made previously - the concept of strategic bombing being a valid strategy, for one.

The definition of strategic bombing, over tactical or mission-based bombing, is that the targets are not strictly production or industrial or even military in nature. The entire point of strategic bombing is to kill civilians, to disrupt and destroy civil infrastructure, to hurt and kill people who have nothing to do with the fighting in order to erode the morale of those that do.

The first example of strategic bombing was the German army dropping 8 bombs on Antwerp via airship in 1914. A word that I find fascinating and horrifying in equal measure was invented via strategic bombing. Coventrate - a verb meaning to devastate by heavy bombing, named after the German bombing raid on Coventry in 1940. 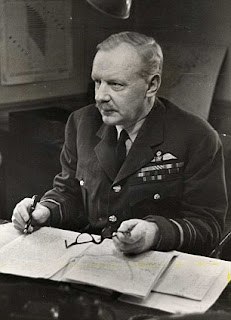 He was in charge of RAF Bomber Command from 1942 to 1945, and he was a great proponent of strategic bombing. Harris famously had a large number of books in his office, books filled with photographs of cities that the RAF had bombed. When asked as to the effectiveness of strategic bombing, he would open these books and gesture to them. Four Coventries right there, he would say. Three Coventries. Hundreds of thousands of casualties, perhaps in the millions, by his direct command. He is on record as saying:


"I do not personally regard the whole of the remaining cities of Germany as worth the bones of one British grenadier."

That is how it becomes acceptable to kill two hundred thousand civilians. Because the civilians stop being individuals. They start being numbers; they start being the weak points in the enemy army's fighting strength, and so become part of a military consideration.

It gets even easier if you stop thinking of them as human, a condition further enforced by significant numbers of "enemy nationals" being rounded up from their homes or places of work and shoved into cages. 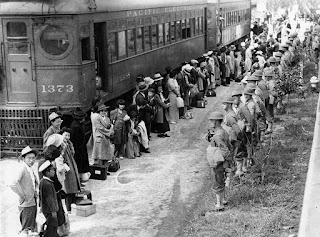 And I am sure we have all seen pictures of armed guards getting civilian prisoners off a train at a camp before, haven't we?

Should we be ashamed of the nuclear bombing of Japan? Perhaps. It is the cherry atop a cake already heaped with shame. We - yes, we - are so easily talked out of humanity. So easily pushed into doing the inhuman thing. All it takes is for the regular folks on the street to do literally nothing while the tiniest proportion of the population dehumanise everyone they see fit to dehumanise.

It never starts with Little Boy and Fat Man.

It doesn't even start with the camps.

It doesn't even start with the eight bombs dropped on Antwerp over a century ago.

It starts long before that.

Which stage do you think we are at as a civilisation?

I'll give you a clue:

Bombs are already being dropped on human beings that we've been convinced not to care about.

If you'd care to share my blog with your friends, I'd appreciate that! If you'd like to thank me in a fiscal form for entertaining you a little bit, I do have a Patreon right here, but please - no pressure. Thank you for reading, and check my social media to the right to keep in touch.
Posted by John Aridi at 13:01