(The third of seven blogs this week! This isn't so bad! Famous last words!)

WARNING: Below this point, there will be a LOT of spoilers, if you aren't caught up with Steven Universe - at the very least to the episode Mindful Education, Season 4, Episode 4.

Here's a nice picture of Garnet to provide some space between warning and spoilers. 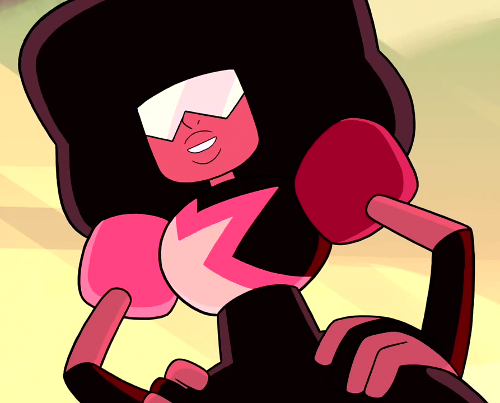 Okay so. I REALLY like Steven Universe. To the point that Steven was my first (albeit lazy) cosplay ever, which I wore at this year's Nine Worlds. 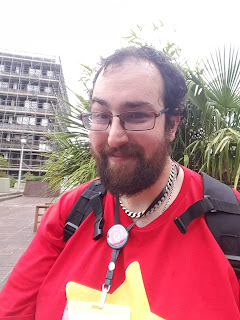 I even had the cheeseburger backpack.

I love this show for a lot of reasons. It is smart. It is sharp. It is funny, without being cruel. It is understated in the epic scope of the overarching plot. You don't even know there really IS one until late in Season 1.

The music is wonderful - both the incidentals and the songs the characters themselves break into with just enough infrequency that it feels like a treat every time. As I understand it most of the cast were chosen in part due to their singing ability, and Estelle - voice of Garnet - does a killer job at bringing life to her as a character, both verbally and chorally.

I love the characters; I love the parts of me that I see in some of them. I love that they are whole. Even if someone seems like a stereotype at first, you get to know them in the ten-minute snippets of life in Beach City. Even characters that seem throwaway and background gain a life of their own, which teaches you a valuable lesson - even people in the background have a story and a history.

Which brings me onto what I love the most about Steven Universe: the lessons.

I don't know a lot of people who have watched the show who haven't felt their heart break at least once while watching it. In order to do so, you'd have to be a robot with no capacity for empathy.

Listen to Pearl singing about Rose - about how she can't believe that Rose would pick the human over her, and now she's gone, and why can't she just...move on? Who hasn't been there? Who hasn't met someone that turned their entire world upside down, like Ruby and Sapphire? Who hasn't seen someone going the wrong way about something and silently pleaded for them to realise, like Pearl in the song this blog is titled after? Who hasn't fucked up so monumentally that you would do literally ANYTHING to make it better, like Amethyst?

The songs add so much to the show. They sum it up in so many ways. Even the seemingly throwaway songs - Connie and Steven's jam song, or the snippets of the song Rose Quartz sings at the end of each episodes - gain meaning, gain traction.

It is the most recent song, however, that I find myself thinking about the most; a song about thoughts, about being hung up on them, about being afraid of even thinking them because they hurt. It's a song that poignantly, pointedly and accurately deals with anxiety - with things we have done wrong in the past and how we deal with them.

It's called Here Comes A Thought, and unsurprisingly, Garnet is singing it to Stevonnie. Because of course their relationship / fusion is a scary thing, and of course Garnet has been through the same thing more than any of the others. It makes perfect sense, doesn't it?

Steven Universe. A comforting cartoon for people living in a flawed world. But that's okay - if every pork chop was perfect...