In the IDW Transformers comics, there is an Autobot named Ambulon. 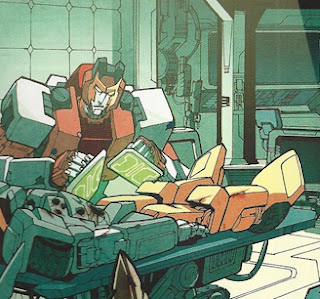 He's the one tending to the wounded chap.

We run into him in a storyline centred around the morality of medicine and medical study. It turns out that he was once a Decepticon, who defected to the Autobots when the experiment he was part of went awry. As his name kind of implies, he's a doctor.

He was part of a Decepticon experiment to create a combiner, and he was a leg. Not a leg and a car. Just a leg.

When I got to that part of the comic I burst out laughing, like aloud. I couldn't help myself. The entire thing about combiners in the IDW series - it's a big plot point, so it actually has some weight, but - Ambulon? Because he's a leg!? Amazing!

...but then that got me to thinking.

Warning. It gets nerdier from here.

Later that day we were watching Voltron,, the new series. It's really good, it bears mention. True to the original in all the best ways but updated for the now, with great character design and animation. We were talking about the characterisation, and I opined that my favourite was - and always will be - Hunk. The strong left foot.

Other combiners were brought up, and I started to notice a pattern:

Anyone remember the original series of Power Rangers? Left foot was Billy in the blue Triceratops-zord. He was my favourite power ranger! What's not to like about Billy?

Back to the Transformers universe. Devastator's left leg is Mixmaster, who was an unsung hero of the Constructicons - a chemistry genius that mixed his own stuff on demand. He was central to all their key engineering tasks. Predaking's left leg is Headstrong, who is stubborn when pushed, just like me - and just like me, insists that he will get there when he gets there, and woe betide if you rush him.

Menasor's left leg is Wildrider, who is the very essence of the Stunticons - savage and brutal, a psychotic speed freak who is a danger to anything on wheels. Abominus's leftie is Sinnertwin - tell me that name isn't metal as FUCK - and Sinnertwin's jam is dismemberment with his two monster heads. The left leg of the Combaticon team is Brawl. BRAWL. The super-angry damn-near-unstoppable fury tank. BRAWL.

The Autobots get love too. Superion's left leg is Fireflight, a take-no-prisoners arrogant son-of-a-bitch of a jet. Defensor sports Streetwise, who is basically Prowl but with added John McLean. Computron's left leg is Nosecone, who is a drill tank. So is (Decepticon) Liokaiser's - bonus points if you know who THAT is, and who Drillhorn is. Nosecone and Drillhorn are both perfectionist strategists, taking their time to concoct the ideal approach to any situation. No wonder I like them.

Left legs RULE. Even the One Piece crew forms a combiner at one point, and "Black Leg" Sanji is - let's face it - a badass. He's like my fourth favourite member of the crew.

So...who cares if they don't have the edgy panache of the Sixth Team Member (Devastator and Liokaiser nonwithstanding), or the brave badassness of the Red Guy, or the head. Who cares.

Ambulon - from Ambulate.
Posted by John Aridi at 19:17