I begin this blog with a definition of the term Cyberpunk:


"A genre of science fiction set in a lawless subculture of an oppressive society dominated by computer technology."

There was a lot of talk about how Back To The Future 2's future never happened, but then actually did happen. The only thing that hasn't shown up is the hoverboard - something I blogged about right here actually.

It's like we wished for the whimsical aspects of that future, and not the more gritty, more day-to-day, more prosaic elements. We were so looking forward to our hoverboard that we forgot to stop Biff Tannen becoming president. At least the two-tie thing never took off... 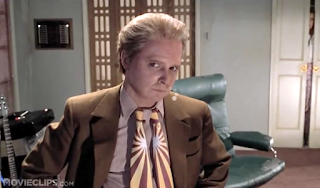 It is very possible to sleepwalk into a situation, because in a world wherein information is actually very free and very quick to travel (and misinformation doubly true), people's chosen method to not be overwhelmed is to trim down what they pay attention to.

This can mean that some very big, very important things go unnoticed, because of unequal coverage.

My favourite book is Neuromancer, by William Gibson.

Highly acclaimed as being the inventor of the term and the genre, Gibson is the grandfather of cyberpunk, to the point of a supercomputer in the hokey-but-fun 1995 movie Hackers is named after him. He wasn't hugely on-point with technology and computing at the time of writing Neuromancer - 1984, when I was two years old - and so that made him free to imagine a future based on social aspects, rather than technological. Still, he framed the world in technological terms, because in his eyes, the social - the spiritual and emotional - aspects of the world would be slowly eroded away, like a crack in a tooth.

There are several tell-tale core concepts that are present in most (if not all) examples of cyberpunk. The biggest is simply summed up as High Tech, Low Life; wherein the world's capacity for technological marvels and genius is incredible, but those technologies aren't capable of elevating the majority of the populace from poverty and squalour. Sure, you may have your highly-advanced computer system, and your replacement left arm, but you still need to grind for fifty hours a week to afford food and crappy lodgings - and social and societal mobility is basically a myth, except within your own little clique.

There's more to it than that, obviously.

Privacy and information is a huge part of the world. Information is currency. More important than almost anything, information leads to rep, which gives you anything. Those who possess data guard it jealously. Rather than use it or open it up for other people's use, it is a thing to lock down. Conversely, those who do not possess other data are constantly pushing to acquire it. Contravening the basic privacy of normal people, while defending one's own. Hacker society is predicated on the notion of all information being free, and the idea of sousveillance is a very nice one (observation from below - the opposite of surveillance, observation from above). How that data is used after the fact? Well, that's up to the people harvesting it - harvesting it and dictating how much of it anyone has access to, including themselves.

Sometimes a legal framework is needed to facilitate this kind of thing. Like the Investigatory Powers Bill, let's say.

Part of cyberpunk is the attitude that is almost entirely prevalent in most of its characters. You have to do it for yourself because nobody is going to do it for you. Becoming enclosed, wrapping ourselves up in ourselves. How can we possibly give a shit about X, when we can just about eat OR pay this bill, but not both?

This applies to almost all echelons of society. Not just the most poor and downtrodden, having to threaten others for a bite to eat, but further up the ladder - the corporate and political entities, who can't care about the effect of their actions on a macro scale, because they need to keep up their rep and their bankroll. The life won't fund itself. Who has the time to help anyone else?

That ruthless, headlong drive toward ourselves. Does that sound familiar?

Another key aspect of cyberpunk is the overwhelming presence of corporation, even over politics. Businesses are simply more important. They set the agenda, they do the dance, and the bureaucrats and so-called rulers pretty much run to keep up. Taking a stand against the march of gain is almost suicidal to one's career, because the monoliths of industry are the real fixed points of the world. So the politicians have to buy in, because to do otherwise is to invite certain doom - and hey, we can probably make a tidy profit from it at the same time, right? Why bother putting so much effort into making things different and achieving nothing, when one can put less effort into making a man in a suit happy and retire before the age of sixty?

Again, does that sound familiar?

I suppose the point I am working toward is that, I don't think Nineteen Eighty-Four is the future we have been sleepwalking towards. Not yet, anyway. We're getting there but not yet. Where we are going first, is Neuromancer.

We all have a phone, because phones have been price-pointed to perfection. Put one in every pocket. Make luxury models for the wealthy, and make finance options available for those we can buy debt from. I speak only for "first world" societies of course, but owning a phone in this country in particular is considered the default. If you don't, it is a statement. It's not a lack of availability. Every one of us has access to a portable supercomputer, by Gibson's standards.

We even have access to these things when we are in relative poverty. Even when our social mobility is stifled, and our income goes up so much slower than the cost of living and our average productivity. Even when the cost of owning a house is becoming inescapable to those who actually need one, despite the constant societal pressure from those who already own one to "get on the ladder".

Corporate interests have far greater influence on our lives than any shade of democracy. They also tend to guide scientific development. We don't get what we want. We get what they want, and then we are brought to understand that we wanted it all along. We're also, frankly, not in touch with what they are doing. Nobody cares enough. Everyone is too busy trying to keep their shirts on their backs.

We might not be able to plug data cables into our necks to eperience a virtual world (we have regular old headsets). We might not have built-in endoskeletons that vastly increase our lifting power (we have ever-increasingly complex exoskeletal frames). But we are definitely getting there.

You know the thing about cyberpunk?

But then, nobody cared enough to stop it, and nobody noticed enough to want to care. So I guess I had better get some cybernetic limbs and some mirrorshades.
Posted by John Aridi at 15:54