So I am hoping that this blog might be informative to folks in light of the upcoming General Election on 8th June - and for that purpose I am going to write it as if you don't know me, because I am hoping that some of you won't. I am probably going to come across as a little condescending, and for that I apologise. I'm trying to pitch this to a wide range of political inclination - from lots to none.

Hello, folks. My name is John. I live on the Isle of Wight in England, and I have a marked interest in making sure that people vote. 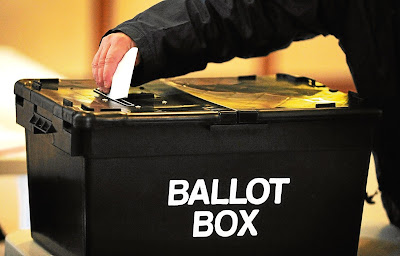 Voter apathy - particularly regarding local elections, but also applying to the general elections that dictate who runs the country - is a bad thing, and if you are an apathetic voter, I am hoping that I can change your mind.

I am not totally unbiased. I will state this plainly and at the beginning of this blog. Those who follow it regularly will be aware that I am a very left-leaning individual, with a taste for Keynesian economics and a focus on the greatest good for the greatest number. If any of the terms I just used throw you off - no judgement, that's just part of what this blog is hoping to achieve.

So, let's have some sample statements, and my response to them.

Why should I vote?


Well, that's a good question. Why don't you?


It's never a bad thing to learn. It can be difficult to get into the subject, but it is important to at least have a basic grasp of the principles upon which the world is run, because then it helps you avoid the next statement.

It doesn't affect me.


This is a fallacy, but it is a very widely-held one. Almost every aspect of life is altered or adjusted by the decisions made by our leaders, more in terms of central government, but also in local government such as our local council. In large part, how much our money is worth and how much of it we get for a day's work is influenced by their attitudes and the laws they create - and so few aspects of our lives are entirely divorced from money.

Politics affects the schools that our children attend, and how well-prepared they are for the future. It affects our jobs, what legal protections we are entitled to while working them, and the kind of healthcare we can receive if we ever fall sick. If, somehow, one can live without ever spending money and never attending a school or a doctor's surgery - then politics can still affect you, as you are still beholden by the laws the politicians create. These laws can vary, from freedom of speech, to banning certain sexualities or religions. This is how politics can have an effect on your life, no matter how far you remove yourself from modern society.

They're all the same anyway / You can't trust any of them / They're just as bad as each other / They'll say one thing and do another.


False. Every Member of Parliament has a voting record, which you can view here. All of their votes are recorded as an article of law. No matter what an MP says, no matter what others say about them - when it comes down to the vote in Parliament, this is where their colours shine, because this is what creates the laws and changes in society. They can lie outside of parliament all they want. When they are casting votes, if they lie, their lie becomes truth. So, find out who your local MP is - a google search will do it - and use this super-useful website to ascertain what votes they have partaken in, and more importantly, HOW they voted.

There's certain large swathes of the world's population that would imply that their leaders are perhaps worse than the alternatives - the democratically-elected regimes of Robert Mugabe and Daniel Francois Malan, for example. It's not all bad. The arguably very positive leadership of Clement Attlee after the second world war pulled the country out of a terrible situation.

I'm exercising my right not to vote. I'm not voting in protest.


That is an interesting choice, and nobody can force you to vote. However, it is a basically invisible protest. Nobody will assume that someone that doesn't turn up to the ballot box is protesting. Apathy is far more likely. Perhaps consider voting for a third party, or for whoever most represents your views rather than against a specific issue.

But I'm just one person. One vote can't make a difference, surely.


The way that our current system of government is arranged means that it is possible for local government and for Members of Parliament from various constituencies don't actually need a very large majority to win. This is very deliberate. What it also means is that individual voters, in some situations, wield a lot of power. In the past 70 years, over two dozen MPs have won their seats with a majority of thirty or less.

On the scale of a local election, such as the most recent one here - three of the districts had a majority of less than ten. One local area was won by the Tories by two votes. Literally, two votes. So the difference that can be made by just three people deciding to vote are actually considerable. The actual number of people who voted for the Conservative party to be in local government came out to 12% of the population of this island, and yet, they took a vast swathe of seats.

That means our voting system isn't fair or representative. Why should I take part in it?


There's a great amount of pressure and political campaigning around voting reform. It is perfectly possible to support and push for reform, while also using the current system to try and secure favourable government - perhaps someone who has, in the past, supported or spoken positively about electoral reform? No reason to not use the current flawed system while at the same time trying to bring in a better one. We can do that.

Why are you cracking down on the apathetic people? What's the problem with voter apathy?


In a democracy that is meant to be representative of the people it governs, people not showing up to vote means that they aren't being represented. It's the first hurdle - before the actual mechanism of voting gets in the way. Certain governments and politicians profit from this low turnout - for example, in the local election of yesterday, only 30% of the island's population (41% of the valid electorate) actually voted. Given that 12% of them were sufficient to incite such a convincing win for the Conservative party, that is a troublingly small number of voters. In one district, only three people out of the 1,187 population didn't vote - in another, barely a quarter showed up. These numbers could swing the election very rapidly in another direction.

The people that will always show up - the people that will vote day or night, rain or snow, regardless of how hopeless it seems - often contain the radicals and extremists of each side of the political divide. The opinions of the average member of society are under-represented at the ballot box when turnout is so low - but then people are surprised when the average member of society is effectively punished by new laws or changes of funding or welfare. If a politician is as selfish and self-serving as one would be led to believe, then it is only in their interest to reward those who actually show up to vote. That in itself should be a good reason to make the trip to the poll.

I heard in the news that...


Always, always, always look for a different source. Especially in England, especially in regard to the press. I've written another blog just here about why they can be unreliable. Never believe the first thing you are told. Check up on the facts. In fact I urge you to check up on everything I have just told you - because being aware of more than one side of an argument is key in politics. Let us not forget that we should be voting for those that reflect our needs and values. The owners of media outlets are the same - but they can reach millions every day to try and convince them to do the same.

How do I even decide who to vote for? This whole thing is a huge mess when you look at it objectively.


I hear you, me from the past. Here's the thing. Decide, first, who you are and what you want the world to be like. Decide what you think is right and fair. Then, find politicians and parties that SAY they match what you want, and have voted to ACTUALLY match what you want. Talk to your friends and family - but don't buy the first horse you are offered. Talk to people you know that know about politics. Hear their opinions. Check out other people's opinions. Absorb information on the topic. Take an hour out of one day to researching the political parties and what they stand for.

Here's a good starting point; it defines the terms Left and Right. (Edit - I have also been introduced to voteforpolicies.org.uk which may help out a lot too - removing the cults of personality and image manipulation, and leaving behind only policies. Thankyou Sarah!)

So there it is. My attempt to claw some sense out of the local elections led me to see how few people voted, and I can't ignore the fact that it is a problem. So this is what I can start to do about it.

If this is at all useful, if there is any merit to be found in this, please share it - share it with your friends that aren't sure, or even the ones that are. Spread this around and we will do what we can to ease voter apathy.

Thank you for your time.
Posted by John Aridi at 01:50