And The Pearl Became The World

The title of this blog comes from a Jonathan Coulton song, called Always The Moon, which you can listen to right here.

I think we can all agree that, whatever we think of Lord Of The Rings, Tolkien did a pretty admirable job in terms of world creation. (I also think it's the law that whenever you talk about world creation, you have to mention him. At least once.) 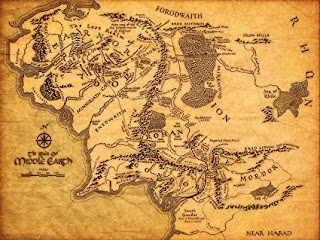 I mean - yes, it does end up being kinda racist, and it's got elements that are pretty problematic, but just as we find the flaws in it, we also have to accept that it had depth that was beyond a lot of its contemporaries. It helped to spawn entire genres and subgenres, and prompted a metric ton of tropes - not all of them great, but hey, we're talking volume rather than quality - that survive to this day, mostly unquestioned.

Without it, the world of RPGs that we live in today - wherein there are multiple super-popular D&D-related streams and youtube channels, and RPGs themselves have a far deeper cultural penetration - would have been very different, even if Gary Gygax himself went on record as not being terribly impressed with Tolkien's work. (I personally agree with him.)

So when I do my own work - writing, preparing for RPG campaigns which I am running - I feel like I have to do a reasonable job in putting together the world, unless it's already been made for me.

My methodology is a little more slapdash.

Gareth L Powell, in his book About Writing, addresses one of the questions that people who write get asked all the time:

Where do you get your ideas from?

Short of having several funny responses (Neil Gaiman used to trot out "I get them from the little ideas shop in Bognor Regis"), the real response is: everywhere. You get ideas from everywhere. From experiences you've had, thoughts you've had in passing, a scene that plays out in your head from a song, a turn of phrase, a feeling you want to evoke. The most important thing is, you don't start with just one idea. You collate the ideas, clump them together, and form something out of the mass that is more than the sum of its parts.

That's why it's a good idea to collect as many ideas and notions as you possibly can. Write it down. You never know when it will come in useful.

For example. A setting I put together for several Pathfinder games I ran included a bunch of ideas and notions that had occurred to me over the space of years. One village was basically a smashing-together of the home village in Monster Hunter 3 and all the parts of Lilo & Stitch that I really liked, splashed with some heavy inspiration from Nation by the great Sir Terry Pratchett.. Another came about from an idea I had when I was reading the Pathfinder core book and wondered: what if there was a city, dedicated to the god of cities? In its centre was a statue that I rescued from a writing project I started (and never finished) back in 2002, a huge angelic figure with a pair of swords - one pointed at the courthouse, another at the library, the two most important parts of the city.

Having imagery like that is important. Even in a simply descriptive narrative, if I describe that statue to the people who played in that game, they'd probably be able to remember the city of Kayde. Likewise, if I describe the people with the tattoos that glow in firelight and the harpoons they craft while singing to themselves, they'd think about Haku, the village of leviathan hunters.

There's another direction to approach this from, though. The content of your world can inspire moments - can inspire situations. Sometimes it goes the other way. Sometimes situations inspire the world and the content in it. Sometimes there is something you need to have happen, a scene that plays out in your head or a few lines of dialogue that you need to use, and it is then on you to make the world a place that supports that happening. 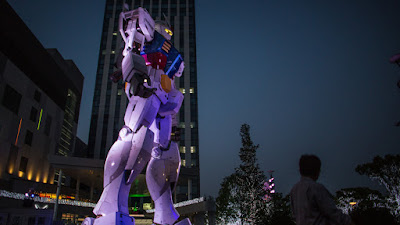 This picture is the life-size Gundam statue that was outside of Diver City in Tokyo. The chap looking up at it in the foreground gives you a good idea of scale. It's a big machine.

Mine are, too. At least, they are going to be. The Gundam RX-78-2 here (aka the Grandpa Gundam) is 18.5 meters tall, that's just over sixty feet in old money. Mine are slightly shorter - fifteen meters as an average. Still, I require that sense of scale to be impressed upon people. I need there to be several scenes in which mechs and people work together, or at least, close to each other - just to demonstrate the difference. So that when I describe the main character feeling like some kind of goddess every time she plugs into her mech, one understands what I am talking about.

After all, it requires creating a world in which mecha exist in the first place, right?

A scene I envisage involves the main character defending a group of civilians. A group that know who she is, and who are rooting for her every step of the way. Someone - I don't know who - yelling at her from the ground to get up, to get back into the fight. (This scene flew together after listening to this song by Against The Current and watching this scene from Spider-Man Homecoming, by the way.) I need to make my setting work, so that they can know her name, they can know who she is and who she is fighting against, and the fight can be brought to an area that this can happen.

That necessitates a setting in which militarism exists, in which a society can know of war and know it happens. It necessitates a specific culture around mech piloting, around pilot elitism, and it requires specifics within the war that might lead to people seeing more than just a soldier in a cockpit - maybe instead of just a soldier, they see a saviour.

Setting details can lend a lot of credence to your particular flavour of military scifi. 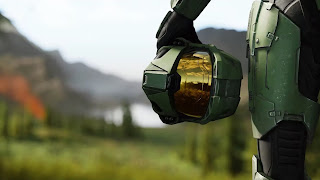 After all, we all know who this guy is.

My work will pop up sometimes on my Patreon, and on my DeviantArt account. If you're interested in this current project, we can totally talk about it.

If you'd care to share my blog with your friends, I'd appreciate that! If you'd like to thank me in a fiscal form for entertaining you a little bit, I do have a Patreon right here, but please - no pressure. Thank you for reading, and check my social media to the right to keep in touch.
Posted by John Aridi at 16:07