Nice Language, Shame About The Plot

(The following is a work of parody. Why you have to be mad? Is only blog.)

You asked for us to email you thoughts about the epic D&D campaign you just finished, and here I am, doing just that.

I'm going to start with what I liked about it, and the big thing, the REALLY big thing, was all the work you did in establishing how different your world was from the standard fantasy snoozefest. Like, who constructs languages for each of their races? I can't imagine how much effort that took, even if it was mostly done for the campaign you ran before this one. I just appreciate the effort - a game involving a dozen Dwarves, one Hobbit and one Human, and you still write an entire booklet about Elvish.

Also the music you picked was great. Just, really really great. Very fitting all the way throughout. Plus, you put some really solid work into the accents and voice work for all the bad guys (especially that creepy envoy dude just outside Mordor, he was ace). So hats off to you for all that. 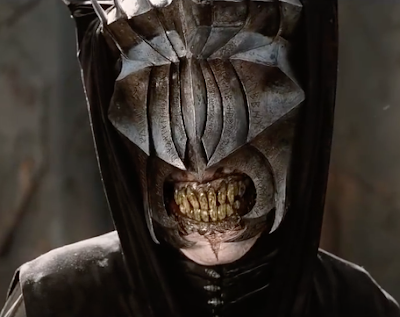 But you wanted honest feedback - so here it is.

I know the point of the campaign was meant to be about the bravery of the "little people" and stuff. Like, showing that no matter how OP the actual front-liners, that it's the actions of those who have the most to lose that really makes a difference.

But dude - the level system exists for a reason.

So you start me, Jerry, Steve and Roy off at level one, okay. Fine. We're just farm folk. A bit tricksy, and I know Jerry was leaning more toward fighter than anything else, but - fine. Okay. So you kind of railroad us out of our lovely home and off on an adventure with that NPC from your last campaign that is friends with Roy's character (who was related to his OLD character, I mean okay, that seems a bit hand-me-down but whatever). We dodge some peril - I know that you had something planned involving a river god or something but I am glad we skipped that - and then we run into Eric's dude.

And Eric's dude is at least level four. 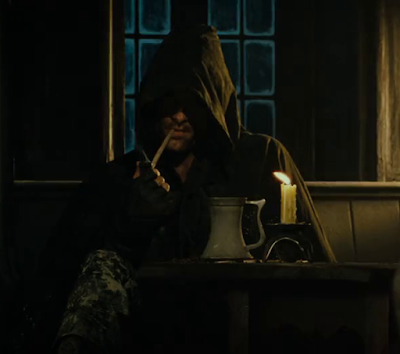 Like he has this whole background, this huge story, and he's also an heir to a throne or something? And he has a magic sword but he can't have it until you say so? But that all seems a little overpowered, a bit unbalanced. Like, I know we're the little people, but does some other guy at the table have to be one of the big people?

Not to mention he's an absolute badass with a NORMAL sword?

So we make it to that elf home place, sure. At this point I know Roy's nervous because Frodo's got this creeping death thing going on (I can't believe he called it creeping death, I haven't listened to Metallica in years) and he doesn't want to lose his guy. After all he spent so much time emoting him, kind of put the rest of us to shame...

Then Suzie and Anna and Carl show up, and they all have characters too, and surprise surprise, their characters all out-level ours, too. 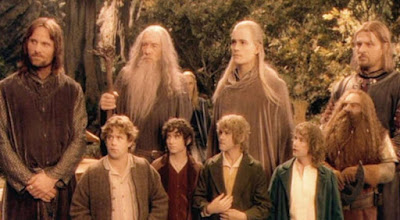 I mean what the hell?

It became obvious at this point that we weren't meant to be playing at the same level, here.

Like it was only reinforced when we got into the first dungeon and basically all we were good for was standing around and looking a bit gormless - even if Steve and I managed to do like three damage to that cave troll - I know that was a tough fight, it was meant to be, but if we were the same level as everyone else I think it would have been... more fun?

And I'm not surprised that Suzie got the killing blow on the thing because, here's the thing, only Roy and I know this, but I know full well that Suzie was in your last campaign too - WITH THE SAME CHARACTER.

I mean come on! Everyone else might have missed it, but I saw how she was absolutely slaughtering people left right and centre, how she could shoot for five miles or something and still have enough kinetic energy in the arrow to kill her target, and I know for a fact that Elves can't walk on snow until AT LEAST level six, and don't get two weapon fighting until level seven - so explain that bit where we were walking over the mountains? 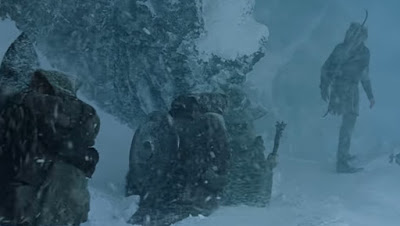 Yeah. That bit. I just get the impression that you were kind of mocking us at this point.

So the scene wherein Gandalf or whatever your NPC was gets killed, in the dungeon, fighting that balrog. I loved that. I loved that! Because all of a sudden we didn't know where to go - we'd have to use our own map, we couldn't just be told where to go next, and I've always hated railroading, you know that - all of a sudden, we're actually adventuring.

But then the elves show up and tell us where to go, and you're making people take Willpower checks to not steal the Maguffin Ring off of Roy, and then when Carl's character fails you kill him off with a rampaging horde of super-orcs?

Not sure how fair that is, even if Carl was kind of okay with a heroic death. Must have been nice to have the stats to achieve a heroic anything whatsoever.

Now, I'll come back to the bullshit Willpower tests in a minute.

Were you really surprised when we split up? I mean, not that myself and Steve got a chance, we got fucking abducted by the super-orcs. So while Carl is writing up his new character, Roy and Suzie have this big argument, they go their separate ways in character, and you solve this by bringing the dead wizard back to life with added powers? 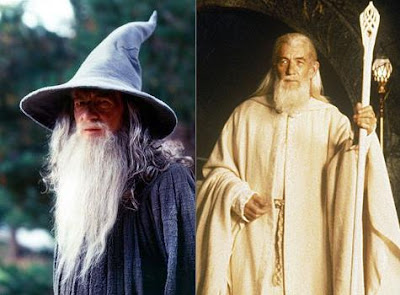 I've never liked railroading. You know that. You know that, and have known that since Carl ran that game set in the Napoleonic wars and we all had to be NPCs in his regiment. But you spend the next... how many sessions was it? It felt like a LOT - having me and Steve get dragged hither and yon by trees, and we made ONE Diplomacy roll to try and get back into the plot, and you managed to make that happen AFTER the epic battle that Eric apparently wins single fucking handed because he's gonna be king or whatever, and AFTER Carl's new character sort-of abducts Roy and Jerry and then ANOTHER NPC comes along to tell them how to get the Maguffin ring into the big volcano?

At this point I knew that we were just a joke to you.

Me more than anyone.

See, I saw what you fucking did, JR. When I mentioned to you, just as we were going down into the dungeon, that Suzie's character - who I had sussed out was from your old campaign - would know the Dwarves that died in here, that made you look a bit silly, didn't it? A bit like you'd forgotten that particular detail. I know Suzie had. So rather than just deal with that fact, you decide to make me take a Reflex save to not accidentally lob an entire suit of armour down the Well Of Certain Army-Summoning Echoing Doom.

How did I fail that test, JR? One of the only cool things about the race that YOU had us four play in the first place is that we have a real high Dexterity bonus and a luck modifier on all our saves, and I still, somehow, managed to dunk the Drum-Kit Armour Of Big-Bang into the Goblin-Summoning Ogre Pit. Because then everyone could have a laugh at how stupid you made me look, right? And it was funny. It was really funny. Hah. 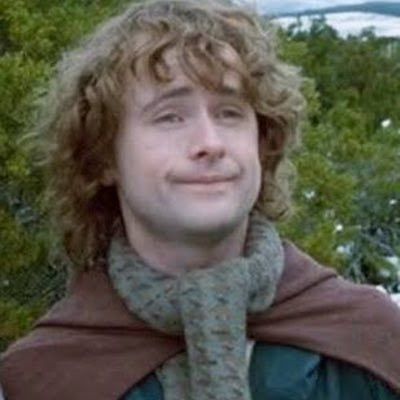 Not content with this shower of bullshit, the NEXT time I bring up an obvious error in your calculations - which is that maybe the people of Rohan might have noticed that their king was all weirdly rotten and pale after his clearly evil adviser showed up from who-the-fuck-knows-where - that was when you decided I needed to make a Willpower test to not play with the fucking magical Skype Orb that you found that we clearly weren't meant to play with.

You kept making me make those tests until I failed. Why me? Why not any of us? Why not your NPC, who was actually handling the thing? No, just me. Because I'm the comic relief, right? I'm the one who fucks stuff up so everyone else has to roll their eyes, and you set that up. You set that up because I keep pointing out the holes in your lovingly-crafted narrative, a narrative that doesn't really make room for people actually making any decisions. JR - you didn't write an RPG campaign, you wrote a novel.

And for my punishment I get to go sing to a lunatic while he eats - a lunatic that it turns out was the dad of BOTH of Carl's characters, who just sentenced one of them to death in battle if you don't mind - and don't join the rest of the party until the... really... really long finale. Oh, thank you so very much for your NPC allowing me to go and light a beacon, that was very kind of you! Glad I could do my part to get all the actual combatants onto the field of battle again, while I watch trolls massacre innocent people and can do literally nothing.

And then Suzie and Anna's character go off and live together because dude, how could you not know they were basically getting together right there at your gaming table, and Eric's character gets his magic sword and his kingdom and his Elf-wife, and Roy gets to met his old character and they both go off to live in Elf-Heaven together because they were both "Ring-Bearers", and then you remember while we are packing up that Jeff's character carried the ring about as well so he gets to go off to Elf-Heaven too, and...that's it?

Me and Steve just sit there with our thumbs up our arses? Carl gets to be Roy's servant or something?

I just... don't know. Like, if anyone deserves the MVP from this entire campaign, it's Jeff.

Roy - Roy just got railroaded the entire time. He was so busy roleplaying how hard it was to carry around this ridiculous Maguffin you saddled him with that he barely demonstrated any agency whatsoever, just went along with whatever was happening. Jeff? Jeff threw himself at every challenge. He actually improvised all those speeches. Jeff was an absolute hero. I don't want to live in the world you made us live in, I want to live in the world Jeff spearheaded. He was a LEGEND.

So... I don't know. This is all going to come across as very harsh. Just please take it in the constructive light it is meant to be in - aside from the bits wherein you made me look like an idiot in front of everyone else because your ego got bruised, for that, you can go suck a minge.

Besides, we all know you ripped the story off from the first world war anyway.

P.S. To prove there's no hard feelings, you're invited to my next game - it's going to be initially set in postwar England, but there will be some Isekai-style other-world things going on.

If you'd care to share my blog with your friends, I'd appreciate that! If you'd like to thank me in a fiscal form for entertaining you a little bit, I do have a Patreon right here, but please - no pressure. Thank you for reading, and check my social media to the right to keep in touch.
Posted by John Aridi at 12:27