So for the book club at work (yeah we have a book club, my work is better than yours) we were tasked with reading things that are more than a century old. My immediate first thought was War Of The Worlds, but I read that regularly anyway, so why not something I haven't read in a while?

So I decided to refresh the cobwebs in my head, and broke open Mary Shelley's Frankenstein. 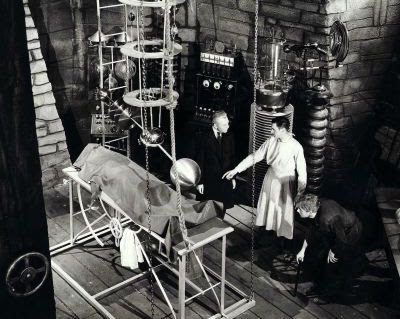 Note the scene above. This doesn't actually happen.

See, it's been adapted so often, riffed on so often, that several parts of the story have become presumed canon without ever appearing in the novel. That happens in adaptation, obviously, but still.

The last time I read this book I was about 19 or 20. I wasn't super-good at reading books then. I mean yes, I could read, obviously - I read voraciously from an early age - but I wasn't good about thinking about what I was reading. That skill came later. That was when I really started to consider what the author was trying to tell me, what a particular perspective might imply, so on, so forth.

If you are thinking of the Kenneth Branagh movie of 1994 you aren't necessarily far off the mark, but ultimately - no. See, I don't think they could make a movie strictly out of the book, and I will tell you why.

I get ahead of myself.

The book is an epistolary, told through letters. Specifically it is told via a letter from a guy called Captain Robert Walton, who opens up the novel by writing back to his sister in London, reassuring her that this adventuring sciency life on the sea is perfectly safe because he literally isn't intending on killing an albatross. Invariably his ship gets stuck in the ice and things get worse.

Walton sees a big-ass dude go by on a dog sled. Days later another dude shows up on another dog sled with only one dog left alive, and this dude is brought aboard his ship and generally cared for until he can get his shit together, and THIS dude is Victor Frankenstein.

Frankenstein starts telling Walton about how he came to be out on the ice, who the big dude was, and so on. He literally lays out his entire life story, repeating it verbatim, just dictating to Walton as he writes it all down. So here we have a story nestled inside a story. Excellent.

Kenneth Branagh was an excellent pick to play Frankenstein. 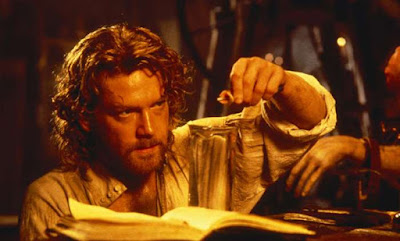 So we get his full life story. How joyful his childhood was. The circumstances behind his adoptive cousin. How everything was just, fucking, great.

Then he catches science and makes a corpse-person.

No, that's literally it. He reads a bunch of natural philosophy books and then he makes a corpse-person in his room at university and then he falls asleep and then it runs away. The actual process of creation is never gone into - and for good reason, Victor here doesn't want anyone else to be able to repeat the process, so he doesn't tell Walton - but it results in this big old boy who casts off into the night and leaves Victor all sorts of upset.

There's an awful lot of anguish, throughout. Like. This really is a story all about how miserable Victor Frankenstein is, after having made Captain Corpse and taken zero precautions from preventing his new creation from just wandering off into the night to do, well, whatever.

Then there's the deep sorrow that Victor feels when he finds out his youngest brother has been killed, and how awful that makes him feel. But then he realises it was his Body Boy that did it, so that makes him feel EVEN WORSE, especially because there's a girl that his cousin palled around with a lot that is being accused of the murder. So SHE gets to die as well. IMAGINE how bad Victor feels!

So Victor is so Sad(tm) that his dad suggests they go for a little holiday. So off they go. Casually fucking off for a day's mountain climbing (in between long agonising soliloquys about how awful he feels) Victor bumps into Tall Dark And Dead, and - after exchanging some really rather curt and savage insults - decides to listen to his tale... which he relates to Walton... which Walton writes down in his letter. FRANKENCEPTION.

Robert DeNiro did an amazing job at playing the creation in the Branagh movie, it bears mention. 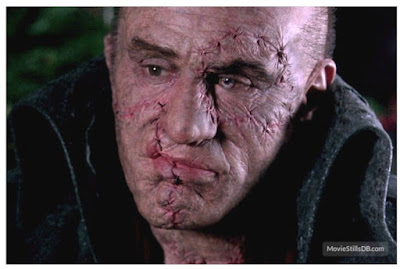 So it turns out, being newly sewn together and reanimated by alchemical genius isn't great. Especially when your creator takes zero time to make sure you function, won't kill anyone, can think, or are happy. The first sensation the poor bastard experiences in his life is his dad going "EW WHAT THE FUCK" so I mean you can imagine how he feels. (Bet it isn't as Sad(tm) as Victor.)

As he learns how to be alive, then sentient, he starts to crave socialisation - which he can't have, cos he's ugly. He hides in a shack behind a cottage and learns all about humanity, and craves the care and general positive interactions that the people who live in that cottage experience every day. So he decides to risk it and say hi to the blind old man that lives there when nobody else is home. It goes great, cos he's learned how to talk at this point, and everything is fantastic until everyone with working eyes comes home and sees how ugly he is. All bets are off.

Yeah, now he's all pissed off.

So he finds his way to where Frankenstein lives (Geneva) and totally by accident comes across Victor's younger brother and casually MDKs him.

Okay so yeah uh straight up there goes your redemption arc.

Big Body here makes a request, at this point. He puts it simply. Look, Vicky-Boy. I want a bride. I want a lady me that will like me. And if you give me that I'll stop unaliving your family.

Victor... says yes. Victor, who was about to smash this guy into bits because he THOUGHT that maybe the beastie boy had killed his little brother, now has testimony stating that yeah he DID kill his little brother (AND frame the girl for mudering him), and is like - yeah okay homie I'll hook you up no issue.

Angry Lad wanders off. Victor goes back home, agrees to marry his cousin (not his actual cousin, it's complicated) after he gets back from England, where he needs to go to learn some stuff about how to make a corpselady for the corpselad. She's chuffed to bits about this. She loves him, despite him being a twat.

He sets up shop on Orkney or some shit. MC Stitch-A-Lot shows up and is like, ay, where's my boo. And Victor, suddenly deciding this is a bad idea, literally shreds what he has made already by hand in the ultimate Yeah About That Nah move.

What follows is basically Victor being sad a lot, the Ungrateful Dead bumping off both his best friend and his wife, then him swearing bloody vengeance, and chasing Big Boi (you know from Outkast) across the ice floe, and here is where I came in.

Now we get back into the story from Walton's perspective. He has a wobble as he really wants to continue his expedition north, but the crew want to not do that cos they are all gonna die. Victor demonstrates that if he can convince himself that he's the real victim of this story he can convince anyone of anything, and makes the crew be okay with maybe going north.

Victor dies of whatever. The ice breaks. And Walton goes home, because fuck this, science isn't worth getting your ass deep-sixed over personally, let alone killing off a bunch of innocents that had literally nothing to do with it.

Because Victor Frankenstein is an ASSHOLE.

Like, Lab-Slab-Thank-You-Mab is literally a monster, but that's because he is LITERALLY A MONSTER. Like he was made in pain and anguish and made to socialise like people but couldn't because people are assholes. Of course it was going to end badly for all concerned. He shouldn't have been made in the first place. Yeah, he gains reason, and then chooses to subtract a whole bunch of people. A WHOLE bunch. And that is wrong, obviously.

But Victor? AN ASSHOLE.

Because he's RESPONSIBLE for all this. And at several stages he has a chance to fix it, and what does he do? Fuck all. Feels sad. Mopes. Acts like a dickhead. Broods. Christ this guy could give Bruce Wayne brooding lessons.

The only dude in this book I actually respect is Walton, because he goes from a devil-may-care "The Ice May Claim Me But At Least I Am A MAN!!!" choad (chode?) to a "Fuck My Sister Gives A Damn I Shouldn't Get The Rest Of These Stout Sailors Killed For My Own Personal Gain" kind of guy.

HE is the lesson, here. Yes, don't make a corpse creature without sufficient containment procedures and a strict moralistic education, but more importantly: Recognise that other people getting iced is worse than you feeling a bit sad.

And I think that Mary Shelley could bring a lot of knowledge to this because as I understand it she spent most of her life surrounded by absolutely fucking insufferable men.

I apologise, anyone from the book group that is reading this - you're gonna hear some of this when we get together next...

But hey, that's what we're in it for, right?

If you'd care to share my blog with your friends, I'd appreciate that! If you'd like to thank me in a fiscal form for entertaining you a little bit, I do have a Patreon right here, but please - no pressure. Thank you for reading, and check my social media to the right to keep in touch.
Posted by John Aridi at 13:41