A Survivor Unclouded By Conscience 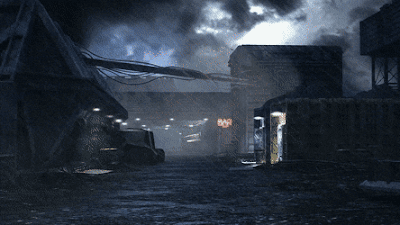 So, today is the day that I choose to engage in the movie marathon. Running in chronological order, starting with Prometheus. 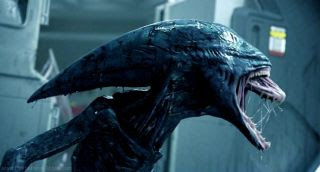 If I get as far as Alien 3, I'll be happy enough - Alien Resurrection isn't on deck for today. Maybe next week I will go into why I like that one the least.

What can I even say about the xenomorph that I haven't said before? It's beautiful in terms of how horrible it is. It's designed that way, and designed well. 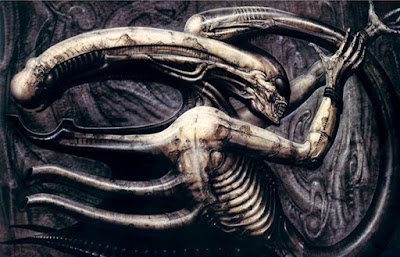 It is unsettling - desperately unsettling. Its design and general body shape is close enough to human, but then takes several sharp left turns. The length of the head. The tail. The tentacle breathing tube things on its back. The way it moves around, which in the original 1979 classic was portrayed expertly by Bolaji Badejo, an artist and graphic designer who stood 6' 10" and could move like a monster. That secondary mouth - that horrible, awful secondary mouth. 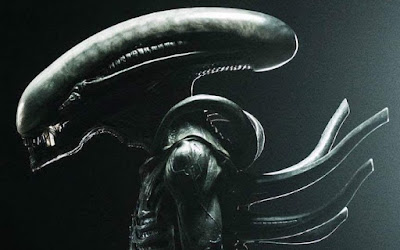 You know what the worst thing is, though? I think?

There's certain books and comics in the expanded media that imply that the species can detect fear. Not just the secondary effects of that fear, but actually simply sense it. Which is useful if you are this kind of ultra-predator. 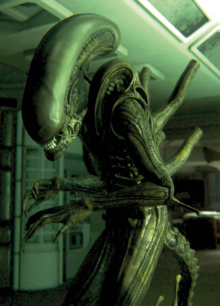 It is pure lethality. It is a distilled nightmare, the end result of both creation and evolution - first one and then the other and then the first one all over again. A pure killer.

One of the scariest things I had ever seen in my life, the first time I saw it, which was way younger than I really should have been. For a week I had nightmares - but then I stopped being afraid of the dark. I quite like it, now.

There was nothing quite like it, when it first came about in 1979. Then it was expanded in 1986 - because over and above the individual ant that caused so much damage on the Nostromo, we find the unity of the hive - and this hive has a queen. You thought the first one was bad? This one is smart. Maybe smarter than you. She can communicate mentally with her children, and she needs you to be their food as well as their crib. 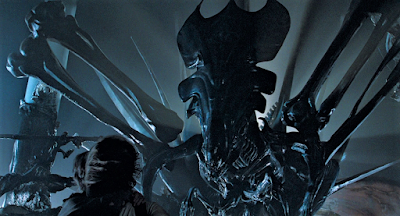 The queen of Hell.

And why does this evil object exist? Why does this ultra-predator plague the universe? Why, specifically, does this branch of the hydra-like potential of the Engineer's black bioweapon plague humanity?

Because of Peter fucking Weyland and his stupid fucking quest to be a god, and the synthetic madman that he made to get him there.

Literally, a manifestation of our hubris and our greed, over and over again.

If you'd care to share my blog with your friends, I'd appreciate that! If you'd like to thank me in a fiscal form for entertaining you a little bit, I do have a Patreon right here, but please - no pressure. Thank you for reading, and check my social media to the right to keep in touch.
Posted by John Aridi at 14:13