Our Demands Are As Follows (What You Are Owed Part 2)

So I blogged about this once before - specifically around Neon Genesis Evangelion and how the writer was treated in regard to its ending - but a couple things have happened recently that make it relevant once more.

While the constant drone of "not in MY franchise" happens whenever the overlooked and underused non-white non-male non-hetero folks get a look in, these two events are a little different. They're only loosely connected, but they are two different angles of a similar attitude.

For the first, we revisit Batman.

A lot of people seem to have issue with this. 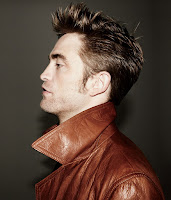 For sake of flying my own flag, I have to tell you my favourite Batman movies were the Nolan-directed Christian Bale movies. That said - I don't know if he's the best Batman on that list? Like, Nolan does a good job of the movies not being much about him at all, and more being about the clash between him and the forces at work trying to influence Gotham.

So why are people mad about Pattinson?

Could it be that his appearance in a certain series of movies has tainted his reputation? Much like Kristen Stewart? Well, yes. Frankly. Despite both of them putting in solid performances in a variety of other roles, they will always carry the sparkle curse with them, because we as a species are horrible people.

(I did my own fair share of hating, don't get me wrong. I'm just capable of seeing that it was pretty childish, I was wrong to do it, and now I know better.) 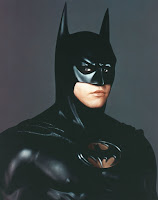 Val Kilmer, George Clooney, Ben Affleck all playing the same character. Except not, really. As mentioned in my last blog, they're all kind of different Batmen. Affleck in particular is playing THIS Batman. 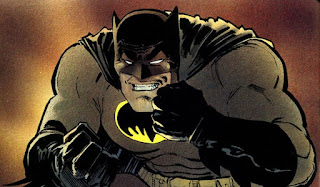 It's hardly his fault the writing, direction, cinematography and general production values of every movie he was in were frankly awful.

So given that how successful an actor is as Batman relies so heavily on the rest of the movie not being garbage, all we can assume each of these individuals bring to the role - aside from how okay they are with their suits having nipples - is a chin. 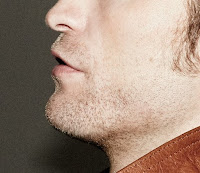 Robert Pattinson has a chin.

The end. Like, literally, that's it. He'll probably be fine, honestly. He will not be a worse Batman than Val Kilmer or George Clooney, simply by virtue of Tim Burton probably having nothing to do with the movie he is in. He probably won't be worse than Ben Affleck, because I have no idea what kind of drugs were being used when Batman V Superman and Justice League were being made, but I think they probably ran out.

Well it would be nice to see, but - they aren't our political representatives, and we haven't commissioned these people to make these things to our specifications. They don't actually owe us anything.

Remember that sentence, as we dive into our next situation.

How we feeling about Season 8 of Game Of Thrones? 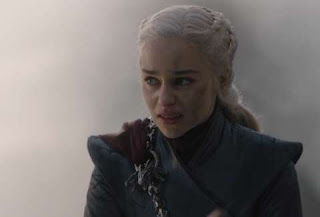 Again, flag on the mast. I don't watch it. I know a lot about it, because I am surrounded by people who like it, and by people who watch it religiously. It is next to impossible to ignore its existence, especially seeing as every day there's at least one news story about something regarding the show. Be it a Starbucks cup, a bit of foreshadowing that the writers have made happen, or about a petition to reshoot Season 8 entirely.

Okay so... I don't have an actual proxy for this. I have similar experiences - Babylon 5 for example, which was shuffled about a lot and didn't necessarily get the respect it was due from corporate - but I don't know if I've ever invested in a show for seven and a half seasons only to discover that it is currently being run badly despite being set up very well.

There is, however, an explanation.

So the book series that the TV show is based on is called A Song Of Ice And Fire. The first book, A Game Of Thrones, came out in 1996. A Clash Of Kings - the second novel - was released in 1998, followed by A Storm Of Swords in 2000. It's at this point that the author, one George R. R. Martin, starts taking longer to finish his work - because he is threading together a more and more complex world, more and more embedded story seeds are coming into bloom, and because it's hard to actually follow up on a complex beginning. The next book (A Feast For Crows) came out in 2005, five years later; six years after that, the most recent volume (A Dance With Dragons) hit the shelves in 2011.

Thirteen years, five novels. Two more in the works according to the man himself. The creation of the world that the show-viewer loves so much has taken quite a lot of time.

It's in the gap between that last novel being released and now that the entirety of the TV show has run. One season every year, aside from last year - which caused a lot of consternation amongst the fans, as I recall. 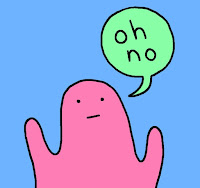 The plot that Martin had written thus far ran out partway through the seventh season, as best I can tell. Which meant that one of two things had to happen.

1) The show goes into hiatus until Martin finishes his work, and then adapts each novel as it has done previously.
2) The show tries to pull together the plot known only to someone else to fit within the constraints set upon it by HBO, and releases it in as timely a fashion as possible.


Now, you and I both know that option 1 won't happen. As mentioned - the year-and-a-half wait for Season 8 was enough to send half the internet into paroxysms. Can you imagine if they were told they'd just have to wait for as long as it took?

It's not a conversation that happened, but it's a conversation I think the showrunners probably had in their own heads, and decided against having to actually address. So they did the best they could, with what they had, which has proven to be not necessarily to the liking of the fans in general.

They have a season, to tie everything up in as satisfactory a way as possible, to cap off the seven seasons previous in terms of character development and arc, to provide a suitably dramatic conclusion. Something that I don't think was honestly possible.

So the fans are angry, because the fans didn't get what they wanted.

And so a bunch of the fans - like, over a million at time of writing - have signed a petition demanding a do-over. No death threats, not like poor Hideaki Anno with Evangelion, as I explored in this previous blog. At least none that have been reported. Just petitions, stating that: 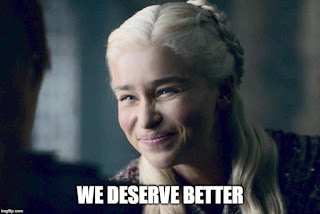 ...to which the obvious response is... 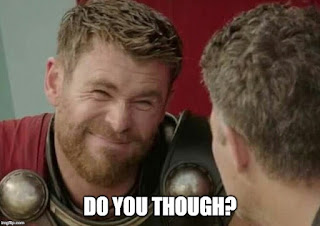 If you are an individual who believes that you DO deserve better, that the showrunners owe it to you to make a better show, that you are entitled to something that is greater than what you were presented with - would you be willing to wait until a year (at least!) after George R. R. Martin finishes The Winds Of Winter? Whenever that might be?

Because that is what would get you better. That is what would result in the show being more satisfactory, more in line with the quality of previous seasons. Having it be based on the writing of the actual author, the actual creator of the world, rather than people viewing it from the outside.

I've said it before. I will say it again. The creators of these works owe us literally nothing. Unless you have gone to them to commission a piece of art, and they agree to the terms, and you pay them the agreed sum - in that case alone, you are entitled to the result that you have paid for. That isn't what happened. You didn't knock on their doors, hand over several million dollars, and then explain in painstaking detail how you want this complicated fantasy story to pan out.

They are not politicians elected by us, they are not accountable to us. We did not vote for Martin to pen the first book in 1996, and we didn't vote for David Benioff (whose prior writing includes X-Men Origins Wolverine) or D. B. Weiss (whose prior work included several unused scripts for various other projects). We didn't put them in that position on the understanding that they would deliver a thing that we wanted, they didn't give us a manifesto, and they didn't make us any promises.

And that is without even going into how much what we are watching (well, what YOU are watching, and what I am seeing second-hand) is being pushed down by HBO, wanting to fit everything neatly into the box of "Television Show" that they have made - which as we all know, doesn't always make a good show.

For what it is worth - I'm sorry that those who have followed this show from the very beginning have had to see it come to an end in a substandard fashion. I'm sorry that the show that you enjoy so much has suffered at the hands of corporate nonsense, because that's what happened. It sucks, it really does. I know.

But, like... a petition? To reshoot an entire season? To make it more to your liking?

We aren't entitled to that.

And so the creators, when subject to this kind of treatment, are justified in having this opinion: 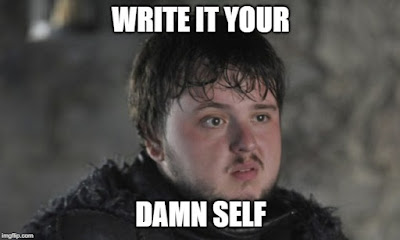 If you'd care to share my blog with your friends, I'd appreciate that! If you'd like to thank me in a fiscal form for entertaining you a little bit, I do have a Patreon right here, but please - no pressure. Thank you for reading, and check my social media to the right to keep in touch.
Posted by John Aridi at 15:13