Like the title of the blog: What's your favourite song?

It was pretty late when I asked this of Facebook but sure enough I got some answers. Good ones, too - I mean it's not up to me to judge, it's other people's tastes and answers I was interested in, but it's nice to know that a lot of my friends have a great taste in music. 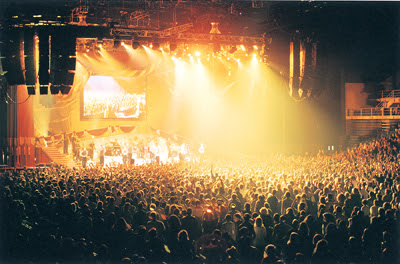 Out of the answers I got, there were two that fit with a theme I was thinking would show up more, and that was:

1) This is what I am in the mood for right now.

2) I cannot simply decide on one.

And I never used to think I was either of those people until I really thought about it.

Before I go into the reasons why this is on my mind, let's take a brief jaunt through every favourite song I can remember having, shall we?


Yeah I was a huge Michael Jackson fan as a kid. My mother had Bad on vinyl and I think I wore that sucker out. Truth be told I am still a fan, never grew out of that. Though when I was taken to Butlins on holiday by my godmother, I was allowed to have a tee shirt made in a printing shop in town - and I picked a picture of Jackson with the words "MICHAEL JACKSON RULES OK" in these big cartoon bubble letters...ah, memories that come back to haunt us.

Either way, there were so many quality tracks - I hadn't really gotten into his more disco-style songs (and yeah I mean real disco not that ruined shit that people tell us is disco), but Bad and Thriller were just jammed with exceptional music - but this song just absolutely slaps. That bassline! Iconic. Just a superb example of songcrafting.

So what could possibly compete with that? Well...


Uh huh. So at this point I'd discovered that singing voices are pretty awesome actually. And while I had started listening to Carter USM and west coast hip hop (much to my mother's lament) the stuff that really struck me, the stuff that moved me, came from Motown.

You can't deny that these guys know how to sing. They really do. The harmonic stuff as well as the solos. What an absolute ballad. Sure, maybe the lyrics are in places a bit cringy - I was a tween at the time, don't hold it against me - but the composition of the chord structure is so damn pleasing. It's got complications in it that I really enjoyed back then, still do now. That chord change at the end, YES. Yes, I am an absolute giggling manbaby for a good chord change... and then? AND THEN they throw you ANOTHER KEY CHANGE. TWO key changes! What is this, All I Need Is A Miracle 96 by Mike + The Mechanics?

Ah but then, dear reader. Then, something changed. A different influence came into my life.

Then, dear reader, I discovered metal.


I am pretty sure that when I was a teenager I had no idea what this song was actually about or any of the thematics contained in it, but I liked to think that I really, genuinely did. But then, that's what music is about, isn't it? It's about something speaking to you, about feeling understood and communicated with. About something inside of you being transcribed in a way you can just casually show other people and say, hey, this is me right now.

Even if as a teenager I was a bit of an emo dweeb, I still recognised quality. Like, this is the album that James Hetfield got some vocal coaching for, this was the song with the orchestral instrumentation as well as the killer guitar licks. Chortle behind one's hand as much as you might, but I never "grew out" of liking Metallica, and this song is still exceptional now. That solo? Yeah, that solo. It's brilliant.

And thus it was until I discovered grunge.


This was the band that I don't know if I would have ever heard of if I had gone to school three years earlier or later. Silverchair were huge amongst my group of friends. Or at least, among the ones that I talked to about music. They were cool because not a lot of people had heard about them, and because they were kind of our age. They were also cool because they were pretty good songwriters, honestly. It helped that Daniel Johns was (and still is) absolutely gorgeous. Yeah at this point I was starting to work out I was bi too.

Get your headbanging gear around that. Simple enough but with absolute gutsy vocals. What's the song about? Who knows man? Who knows. It's kind of about being stuck in a town but not doing much to leave? Yeah, let's go with that. But fuuuuck the chorus, yes. Another great solo in there, too. I wore out the tape I had of this album (that I copied off someone else) so I had to go out and get my own copy on CD - I remember Frogstomp and Freakshow, the band's first two CDs, were ubiquitous with me. Where one went, the other always followed. Then came Neon Ballroom and my first music festival, Reading 1999, specifically to see Silverchair, even if I didn't think they'd play this song. (They didn't.)

It wasn't until I was basically leaving high school and going into the greater world that there came another change, even if it wasn't such a huge change as those previous.

I mentioned voices already? Eddie Vedder's voice is one of the best I have heard in my entire life. I mentioned solos already? This song has an absolutely iconic solo from one of the best guitarists on earth, Mike McCready. I mentioned songs speaking to me? This one spoke to me. A lot. An awful lot. It spoke to me about questioning existence and its benefits. It spoke to me about doubt and bad circumstances and all the other things that the genre (as much as grunge musicians hated being put into a genre together) spoke of.

And nothing really shook this song from that spot. For a long time. I mean I have heard better songs, but I am the first to admit that me liking a thing doesn't make it necessarily an objectively good thing. Like, I like Neil Breen films, and they are objectively terrible. Just, nothing came along that I could, with hand on my heart, say spoke to me more than this song did.

And I am not exactly sure when but I am pretty sure it has been this year sometime.

So now we have a new entry.

It isn't that I lost the love for each song as it slipped from the top spot. Even if Smooth Criminal isn't my favourite Michael Jackson song any more (I think that is probably now Thriller or Man In The Mirror), I still love it. Even if I don't find myself listening to Boyz II Men much any more, On Bended Knee remains one of their best. Even if - who am I kidding I still listen to Silverchair all the time.

Now, though... different stuff speaks to me.

Like, there's still this... huge ass list of songs that, if I hear them, I will turn up and put the rest of the world on hold for. Are they my favourite song? I mean they can't all be. Are some of them? I am fairly sure that some of them are, or could be, or would fit the criteria, but - picking just one has become...

Black Hole Sun showed up in the comments - a song very near and dear to me. Do I like it better than Alive? I'm not sure. It varies daily. Does it speak to me more? Varies daily. What about Vincent? A song I feel in my very bones? Some of the story, not the whole story. Recovering The Satellites? One of two songs I have the lyrics for on my own arm - again, a big thing, not everything.

Wish You Were Here? Party Of One? The Pavilion? Thunder Road? So Long Astoria? Learn To Fly? I Am The Highway?  The Rambler? Trees And Jets? Nightcrawler? You Will Be Found? Far From Perfect? Amaryllis? What I Got? Motown Never Sounded So Good? Innuendo? Kashmir? I Stay Away? The Touch? We're In This Together?

How do I even pick?

And sometimes you just know that, right now, everything is kind of in the air.

That's not so bad a place to be, after all.

...wait nevermind I found it it was this all along


If you'd care to share my blog with your friends, I'd appreciate that! If you'd like to thank me in a fiscal form for entertaining you a little bit, I do have a Patreon right here, but please - no pressure. Thank you for reading, and check my social media to the right to keep in touch.
Posted by John Aridi at 13:32