This is a CS gas grenade cannister. 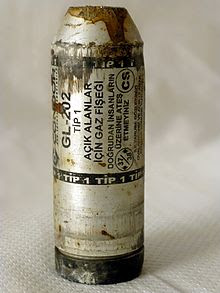 2-chlorobenzalmalononitrile - also known as CS gas, a kind of tear gas - is utilised as a crowd control agent. It reacts very painfully with moisture on the body, most prominently the eyes, hence the name, tear gas. It also attacks the respiratory system, and can lead to burns on the skin if one is sweaty or sunburned.

It is an irritant.

It is marketed as non-lethal though this is disputed, given its actual function. Assuming a fully healthy human being that is under no duress and is in a well-ventilated space when they are hit with the stuff, sure, non-lethal. It doesn't often get used under those circumstances.

CS gas was developed in Porton Down research facility in Wiltshire. 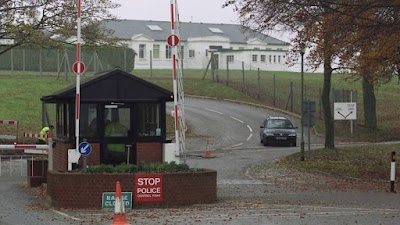 Yes, Porton Down, wherein we have studied other chemical and biological weaponry in the past - such as sarin, anthrax, botulinum, so on. All the kind of stuff that is banned from use in warfare by the Geneva Convention.

Oh yes. Tear gas is banned by the Geneva Convention. You can't use it against the enemy in warfare. You can, however, use it on peaceful civilians.

You can use it on people who have gathered together to protest against a man's murder, and that is totally fine, and allowed. Nothing wrong with that whatsoever. And then, when the people you are using the tear gas on get upset, or annoyed, you get to claim they are the problem.

That's fantastic, because for as long as there has been a man in a house on a hill, there's been people that don't get to live on that hill, who have wanted to not drown every rainy season. The proverbial crowd with pitchforks. So it's important - if you are that man on that hill - to make sure that you can make people think that they might get what they want, if they never pick up the pitchforks.

You can't get what you want through violence, the apologists say. The state agrees, from behind several layers of accountability shifting, after its agents kill yet another black person, using the excuse of upholding the law.

A list of things that only came into existence after extensive physical protests:

In the end you have to wonder if it wouldn't just be easier to stop killing minorities; perhaps not for a president who likes to parrot the words of segregationists, whose grandfather was in the Klan, but maybe for enough of the rest of America that a change can be made. 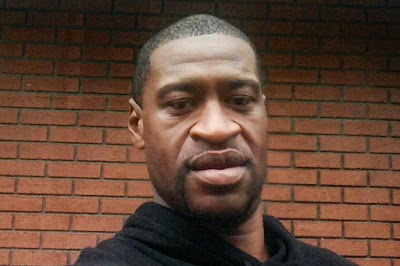 I won't be asking you to hit my Patreon this week. Instead I would ask you to donate to the Minnesota Freedom Fund, to pay bail for protesters arrested in Minneapolis and beyond.

Thank you for your time.
Posted by John Aridi at 13:53