So I've blogged about Monopoly before - albeit briefly. 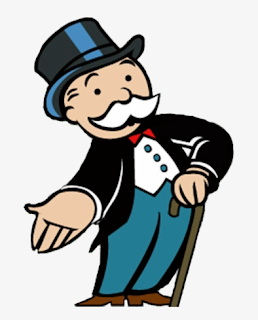 This right here is Rich Uncle Pennybags. Just look at him. Smug bastard. You probably recognise him as the mascot of Monopoly. Yep, he's the one whose mug is plastered all over this exercise in monetary manslaughter, and has been since 1936.

Of course, there's a ton of variants of Monopoly. It's almost more likely that one owns a variant than that one owns the original game. (Not the ORIGINAL original game - I'll get into that, don't worry.) Anniversary editions, editions depicting different cities and localities, Star Wars, Warhammer 40,000, Bass Fishing, Street Fighter, Garfield, Shrek, The Walking Dead. You name it.

Now, people with their finger on the pulse - aka, have looked at Twitter any time in the past few days - will probably know where this is going.

So... despite being a model of how awful the capitalist class is, a demonstration of how fiscal exploitation works, et cetera, it turns out that the game of Monopoly in and of itself is fairly equitable. If you come to the table to play it, you are given exactly the same start as everyone else, regardless of any external circumstances - assuming you aren't playing with any weird rules, and nobody cheats. You all start with the same amount of cash, from the same spot, and you all have the same chance of going first (which gives you a marginally higher chance of starting to profit from your competition).

It flattens a lot of the privileges inherent in society, by removing them entirely. The game doesn't track your gender, your ethnicity, the wealth of your family, your education, your sexuality, your place of birth; nor does it track how other people discriminate against others. All it does is start you at the same level as your peers - with seed money of $1,500, enough to build a hotel on the most expensive piece of property in the game. In real life figures that is hard to calculate, but suffice to say that it makes Donald Trump's "small loan of a million dollars" look tiny. 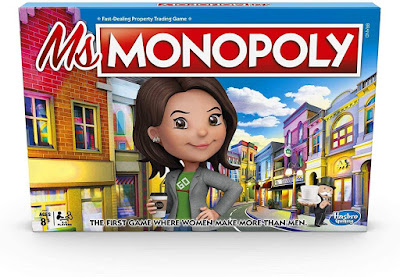 So there's two angles in this game, and I kind of appreciate one of them, but the other is... let's say, not helpful.

One angle is one of recognition; the properties have been replaced with things invented by women which often don't get credit, like wifi and chocolate chip cookies. The pieces are changed too, and while a couple of them are a bit limp (a jet - and a white top hat because the person on the front is Rich Uncle Pennybags' niece, obviously), I like that they included a barbell and a notepad and pen.  Articles implying doing stuff and being active, rather than... like, a cat. Or an iron. Not even Hasbro would be so tone deaf as to include an iron.

On the OTHER hand...

According to payscale.com, women are paid - on average, in the US - 81 cents for every full dollar that men are paid. If you wish to disagree you can go argue with them over here. What Ms. Monopoly does is take that and, well, run with it... in a not very helpful direction.

So, really, more harm than good.

This isn't redressing an imbalance. This isn't an education. This is taking a game that was originally about how all of the players are monstrous to each other - because, well, capitalists - and instead adds another class divide, which casts women in the lead role as head bad guy.

I mean, it's kind of patronising too, right? To make a version of Monopoly - already, as I discussed, a quite equitable board game in terms of player advantage in comparison to each other - and to smugly say "But girls get that extra money that they don't get in real life!" doesn't really tell a good story about sexism or feminism or... anything, really.

Rather than this mythical world-that-women-want - wherein they are in charge and have more inherent advantages - couldn't this point have been made with better game mechanics? Maybe to delineate the actual challenges that women face in the workplace and the world in general? No? Nothing that would require actual research? No, okay.

Especially eye-rolly, given the origin of Monopoly; because it didn't start life as Monopoly. 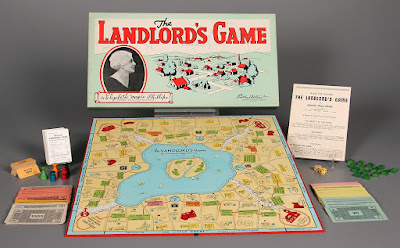 It started life as The Landlord's Game. You can find out a lot about it in this excellent article here from the New York Times. It was designed as early as 1902 and patented in 1904 by the formidable Lizzie Magie. Magie was a Georgist; she held with the teachings of the economist Henry George that economic value from land - including the natural resources within it - should be distributed amongst the society that inhabits that land, not the individual. That was what the Landlord's Game was for; it had two rulesets, one that rewarded the players for generating the most wealth for society at large, and...

...one that rewarded players for dominating the other players with monopolies and forcing them out of the game.

This would have been one of those inventions to put on the board - could be a fun little nod back in time, right? Except for fact that it was basically totally bulldozed when after a bunch of economics games were made and published, the game Monopoly - which Charles Darrow, its designer, swears was NOTHING to do with The Landlord's Game, honest, pinky promise - got picked up by the company that was publishing The Landlord's Game in the 1930s, and started pushing it instead. Effectively, giving the game a...

I guess that's why it isn't on the Ms Monopoly board, then.

Wonder how many women were on the design board for that?

If you'd care to share my blog with your friends, I'd appreciate that! If you'd like to thank me in a fiscal form for entertaining you a little bit, I do have a Patreon right here, but please - no pressure. Thank you for reading, and check my social media to the right to keep in touch.
Posted by John Aridi at 15:53